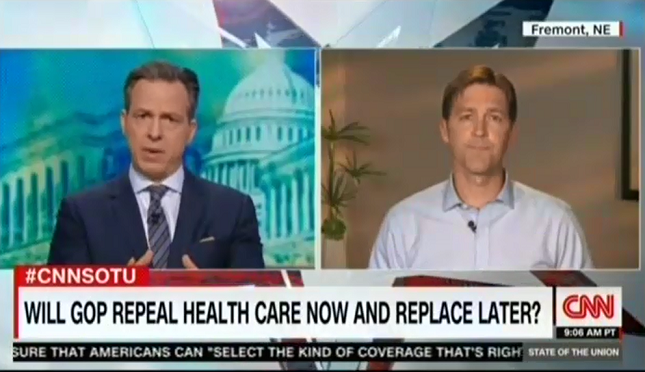 On Sunday morning political talk shows, Republicans have deployed a three-pronged approach surrounding the Senate bill to repeal and replace the Affordable Care Act (ACA). Republicans who openly support the bill have mostly been hiding. In three weeks of major Sunday talk shows that have aired since the bill was released, only two Republican senators who openly support the bill have appeared on the shows to defend it. Meanwhile, the Republicans willing to defend the bill in public have been attacking the Congressional Budget Office (CBO) and lying to make their case for the Better Care Reconciliation Act (BCRA), which is reportedly the most unpopular bill in three decades.

Since the Senate bill was unveiled on June 22, there have been 15 appearances by Republican senators on the major Sunday morning political talk shows -- ABC’s This Week, CBS’ Face the Nation, CNN’s State of the Union, Fox Broadcasting Co.’s Fox News Sunday, and NBC’s Meet the Press. Of those appearances, only two senators expressed support for the bill: Sens. John Barrasso (R-WY) and Pat Toomey (R-PA). Other appearances by Republican senators included Sens. Mike Lee (R-UT), Rand Paul (R-KY), Susan Collins (R-ME), Ted Cruz (R-TX), and Ron Johnson (R-WI), all of whom have publicly stated that they do not support the bill. Sens. Bill Cassidy (R-LA), Lindsey Graham (R-SC), John McCain (R-AZ) and Ben Sasse (R-NE) also appeared on Sunday shows to discuss the bill, but gave no indication of whether they’d support it in its current form.

For context, there are 52 Republican senators and, according to The New York Times, 17 of them have publicly said they would support the bill -- yet only two have gone on the Sunday political talk shows to defend it. It’s understandable why they would want to stay away from the shows; after all, the bill is incredibly unpopular.

Republicans who have been willing to go on the Sunday shows to discuss the bill have borrowed a play right out of right-wing media’s playbook: attack the CBO. Days after the bill was released, the nonpartisan CBO published its report which stated that the bill “would increase the number of people without health insurance by 22 million by 2026.” Amid the bad news, some Republicans took to the Sunday shows to lash out at the office.

On the July 2 edition of CNN’s State of the Union, Sasse attempted to discredit the CBO’s findings, claiming that while the CBO is “good at certain kinds of analysis,” when “analyzing macro, long-term, highly complex dynamic social programs, they’ve almost never been right.”

Additionally, Health and Human Services Secretary Tom Price, who helped pick the man who is now in charge of the CBO, suggested that the CBO did not “look at the entire plan” and left out additional reforms the Republican Party intends to offer (which the GOP have not articulated yet):

This tactic of attacking the CBO has been employed several times by others in the Trump administration and its right-wing media cronies to drum up support for the bill.

With their backs against the wall, Republican lawmakers have resorted to flat-out lying in an attempt to garner support for the bill. During his appearance on Fox News Sunday, Barrasso invoked the conservative media canard that “Obamacare is collapsing every day,” despite the fact that this talking point has been repeatedly debunked.

Toomey also lied about the bill on Face the Nation, saying “The Senate bill will codify and make permanent the Medicaid expansion.” As Politico’s Dan Diamond pointed out, “The GOP bill ends funding for Medicaid expansion in 2024, and bill’s additional cuts projected to reduce coverage for millions”:

Republicans are utilizing these strategies of hiding, attacking, and lying because they cannot defend it by telling the truth and arguing on policy merits; the bill is set to kick millions off insurance plans while giving a tax cut to the most wealthy. And other Republicans who are uncomfortable using these strategies have stopped appearing on TV. Journalists, especially on the Sunday shows, need to ask why Republicans can’t stand behind the bill they are trying to jam through the Senate, before it’s too late.