NBC Sports has pledged to expose Russia's anti-gay “propaganda” law during its exclusive coverage of the 2014 Winter Olympics in Sochi. Since the law's passage on June 10, however, NBC's news programming has almost completely ignored the controversy surrounding the measure, raising concerns about their willingness to report on the law during the event next February.

Russia's Parliament Unanimously Adopted “Deeply Conservative” Law Banning Gay “Propaganda.” According to The Guardian, the passage of the law, which effectively “makes it illegal to equate straight and gay relationships,” has led to a spike in anti-gay violence:

Russia's parliament has unanimously passed a federal law banning gay “propaganda” amid a Kremlin push to enshrine deeply conservative values that critics say has already led to a sharp increase in anti-gay violence.

The law passed 436-0 on Tuesday, with just one deputy abstaining from voting on the bill, which bans the spreading of “propaganda of non-traditional sexual relations” among minors.

The law in effect makes it illegal to equate straight and gay relationships, as well as the distribution of material on gay rights. It introduces fines for individuals and media groups found guilty of breaking the law, as well as special fines for foreigners.

International rights groups have called the current situation in Russia the worst human rights climate in the post-Soviet era. [The Guardian, 6/11/13]

Despite Assurances, Propaganda Law Could Threaten Openly Gay Olympic Athletes, Visitors During 2014 Winter Games. According to Gay Star News, the law will be enforced during the 2014 Winter Olympics:

A Russian lawmaker has said the 'gay propaganda' law will remain enforced during the Sochi Winter Olympic Games in 2014.

Vitaly Milonov, co-sponsor of the 'non-traditional relationships' bill, said the government cannot decide when to selectively enforce the law.

It comes as the International Olympic Committee said the Russian government had 'assured' them all athletes and spectators will be safe from arrest.

Speaking to Interfax and as translated by GSN, Milonov said: 'I have not heard any comments from the government of the Russian Federation but I know it is acting in accordance with Russian law.

'If a law has been approved by the federal legislature and signed by the president, then the government has no right to suspend it. It doesn't have the authority.' [Gay Star News, 7/30/13]

NBCUniversal Will Have Exclusive Coverage Of 2014 Winter Olympics. According to the International Olympic Committee:

The International Olympic Committee (IOC) today awarded NBCUniversal (NBCU) the broadcast rights in the US for the XXII Olympic Winter Games (2014) in Sochi, Russia, and the Games of the XXXI Olympiad (2016) in Rio De Janeiro, Brazil, as well as the 2018 and 2020 Olympic Games, which have yet to be awarded to a host city.

NBCU has acquired the broadcast rights across all media platforms, including free-to-air television, subscription television, internet and mobile. The total agreement is valued at USD 4.38 billion. [Olympic.org, 7/6/11]

NBCUniversal, which has the exclusive rights to broadcast the Olympics in the United States, has a unique opportunity - and a responsibility - to expose this inhumane and unjust law to the millions of American viewers who will tune in to watch the Games. You no doubt agree that it wouldn't be right to air the opening ceremonies, which is an hours-long advertisement for the host country, without acknowledging that a whole segment of the Russian population - not to mention foreign athletes and visitors - can be jailed for an immutable aspect of their identity. [Letter via Buzzfeed, 6/24/13]

NBC Sports: We Will Cover Russia's Anti-Gay Laws “As They Are Relevant At The Time Of The Games.” According to Variety, NBC Sports will cover the controversy as part of its Olympics coverage in February 2014:

NBC Sports chief Mark Lazarus on Saturday acknowledged that the network will address the controversy stirred by Russia's new anti-gay laws in the Peacock's coverage of February's winter Olympics in Sochi, Russia.

Lazarus sought to head off a questioning frenzy on the issue that has made headlines during the past week after Russian legislators enacted laws that could potentially lead to the arrest of gay athletes who travel to Sochi for the competition. Lazarus noted that the Olympics has long been affected by social and cultural issues of the day.

“We will address those issues as they are relevant at the time of the Games, as has always been done by NBC's coverage,” Lazarus said at the start of the TCA sesh on the winter Games.

“Governments across the world have different laws” that many find distasteful but are not a source of friction “as long as it doesn't affect us.”

Lazarus added: “If it is still their law and impacting any part of the Olympic games we will acknowledge it.” And he quickly sought to distance NBC and Comcast from any suggestion that they condone discrimination.

“We don't believe in the spirit of the law that they have passed and are hopeful that the Olympic spirit will win out,” he said.[Variety, 7/27/13]

NBC News Has Made Almost No Mention Of Controversy Over Russia's Anti-Gay Law. According to a Media Matters analysis of NBC News' coverage of the 2014 Winter Olympics, NBC News mentioned the controversy surrounding Russia's anti-gay law only once between June 10 - when the law passed - and August 5, despite devoting several segments to the upcoming event: 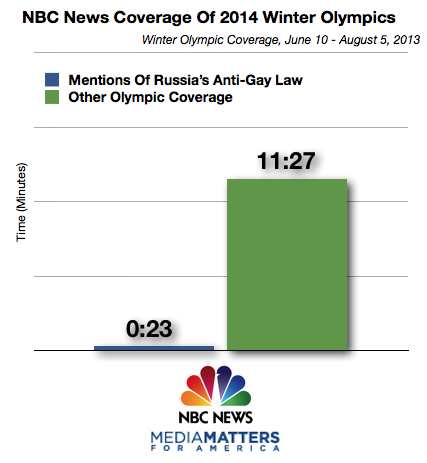 Media Matters searched news transcripts provided by Nexis and our internal archives for the words “Russia,” “gay,” “Sochi,” and “Olympic!” between June 10 and August 5. Reruns and teases for upcoming segments were excluded. NBC News programs include Today, NBC Nightly News, and Meet the Press with David Gregory.

Segments were considered Olympic coverage if they focused on some aspect of the Olympic Games, including former and future Winter Olympians.