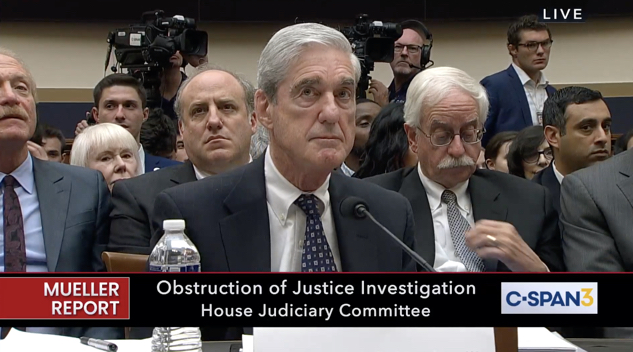 During today’s testimony from former special counsel Robert Mueller to the House judiciary and intelligence committees, some mainstream media pundits avoided the difficult work of parsing the substance of what was said to instead focus on the optics of how it was said. Other journalists did focus on substantive reporting.

As summarized by MSNBC’s Sam Stein, the hearing reiterated that President Donald Trump has engaged in serious wrongdoing, and it raised the possibility that Trump could be charged with crimes after he leaves office:

On the one hand the Mueller sputtered a bit. On the other, he said Trump wasn’t exonerated, could be charged after he left office, was “generally untruthful” in his answers, accused his team of lying, misleading and covering up, and called his love of WikiLeaks problematic

In terms of important exchanges that occurred during the hearings, CNN’s John Avlon highlighted one in which Mueller explicitly indicated that Trump and his campaign had lied about Russian interference in the 2016 election:

SCHIFF: “Trump and his campaign welcomed and encouraged Russian interference?”

SCHIFF: “And then Trump and his campaign lied about it to cover it up?”

In another noteworthy exchange, Mueller indicated that he did not believe the answers submitted by Trump under oath to the special counsel’s office were truthful.

But Chuck Todd, the frequently shallow host of NBC’s Meet the Press, fell into the optics trap when discussing the hearing in which Mueller did stutter at times and asked for questions to be repeated when he couldn’t hear them. According to a mid-hearing update from Todd, “On substance, Democrats got what they wanted,” but “as they were using [Mueller] for clarity, he’d somehow fog it up in how he would do certain things. So look, on optics, this was a disaster.”

WATCH: Did Democrats get a dramatic moment from Robert Mueller's testimony this morning? #MuellerHearings

“On substance, Democrats got what they wanted,” says @chucktodd
“On optics, this was a disaster.” pic.twitter.com/57GzwADE4f

Prior to declaring the “disaster,” Todd already had the optics of Mueller’s performance on his mind, saying, “In no movie would the best actor, the lead person here, have the fewest words spoken,” and claiming that Mueller “has no interest in helping to provide color [or] context and that does I think take away some drama.”

Todd’s take was praised by Fox News host and unofficial presidential adviser Sean Hannity on his radio show in support of Hannity’s claim the hearing was a disaster for Democrats.

Other pundits expressed similar sentiments. Nate Silver of FiveThirtyEight argued that “good optics” were actually “the whole reason” for the hearing:

Also to folks who are like “WHY IS THE MEDIA FOCUSING ON OPTICS INSTEAD OF SUBSTANCE?!?!?” the whole reason the Democrats held this hearing was because they thought it would make for good optics; Mueller made clear ahead of time that the substance was all in the report itself.

Todd’s NBC colleague Ken Dilanian said that for the hearing to be successful, Democrats would have “to present the movie version of the book to a public largely unfamiliar with the facts,” and “that's why optics and delivery and narrative matter”:

This hearing was a communications exercise designed, as Democrats said over and over, to present the movie version of the book to a public largely unfamiliar with the facts. That's why optics and delivery and narrative matter. https://t.co/c59fKbiYaB

During Politico’s live analysis of the hearing, senior legal affairs contributor Josh Gerstein seized on a “bad optics” moment when Mueller’s aides pointed to different committee members in trying to direct his attention to the member who would be questioning him next: 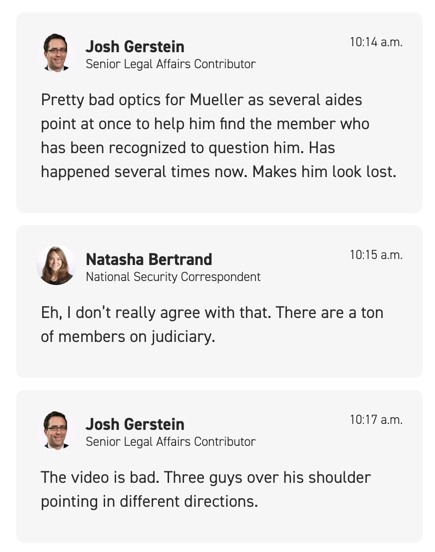 One of CNN’s Chris Cillizza’s key takeaways during the hearing was that “Democrats viewed the hearing as a chance for the public to hear what the President did (and didn't do) from a straight-out-of-central-casting prosecutor. Mueller didn't come across like that.”

A silver lining to the optics coverage is that fans of Todd’s commentary other than Luntz and Hannity were few and far between, and many people pushed back on Todd’s framing: