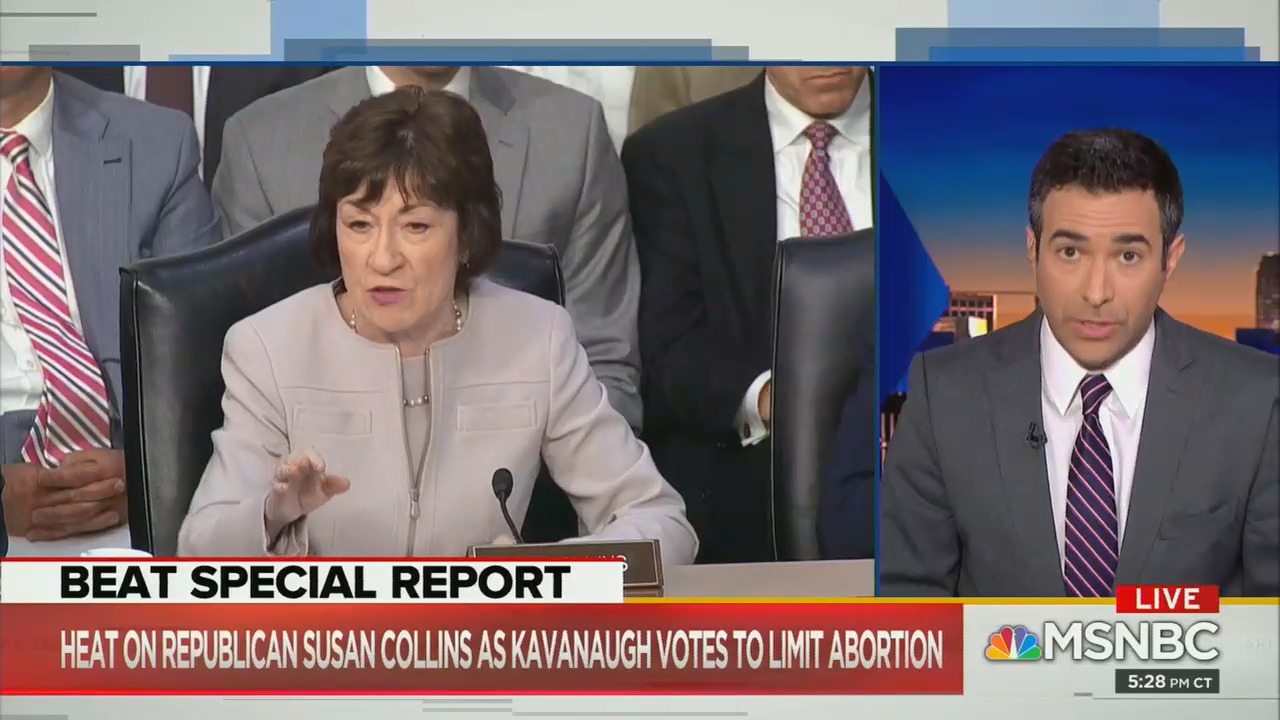 Media outlets have long touted Sen. Susan Collins (R-ME) as one of the few pro-choice Republicans in Congress -- a label she herself has embraced. But on the February 13 edition of MSNBC’s The Beat with Ari Melber, host Ari Melber explained that Collins’ reputation is contradicted by her record, including her recent vote to confirm Justice Brett Kavanaugh to the Supreme Court and her endorsement of his subsequent abortion-related decision.

After Justice Anthony Kennedy retired from the Supreme Court in 2018, Collins said she wouldn’t vote for a replacement who “demonstrated hostility to Roe v. Wade.” After Collins met with Kavanaugh, she released a statement saying that she was reassured about his stance on Roe v. Wade because he claimed to believe that Roe was “settled precedent.” As many media outlets argued at the time, Collins had no reason to be reassured by Kavanaugh’s statements given his record on abortion-related matters. In fact, Kavanaugh’s nomination represented a substantial threat to the abortion protections in Roe. But Collins did not waver -- even after Christine Blasey Ford reported that Kavanaugh assaulted her when they were both in high school -- and she ultimately served as a key swing vote to confirm him.

On The Beat, Melber explained that Collins’ vote to confirm Kavanaugh was both out of line with her stated “pro-choice” views and that it is already proving to be a mistake given Kavanaugh’s recent vote to deny a stay in a Louisiana case concerning abortion access. The case involved a law that required abortion providers to “have admitting privileges at nearby hospitals” and was “essentially identical” to the law the court struck down in 2016 in Whole Woman’s Health v. Hellerstedt. A majority of the court voted to block the law from going into effect while the case goes through litigation, but Kavanaugh voted against that decision and “wrote a four-page explanation of why he thought the law should go into effect.”

In the report, Melber noted that Collins has voted to confirm nominees considered anti-abortion to the Supreme Court in the past:

ARI MELBER (HOST): Note that Sen. Collins has some experience with a pattern here. We’re going to show it to you because she backed Trump and voted to confirm [Neil] Gorsuch as well as Kavanaugh just like she voted to confirm [Samuel] Alito. As for [Clarence] Thomas, the fourth vote [in the Louisiana case], well she wasn't even in office yet.

Melber also explained that Kavanaugh’s first vote in an abortion-related case -- the Louisiana decision, which came almost “as soon as he joined the court” -- has already largely refuted Collins’ claim that he would protect Roe v. Wade:

MELBER: The Collins vote helped ensure that Trump could put Kavanaugh on the Supreme Court while also claiming, as you just saw -- she claimed his words assured her that these abortion precedents were safe and wouldn't change. Was she right? When will we know? Why am I talking to you about this right now -- this important issue? Well, when will we know? It didn't take long. This is in the news right now because Justice Kavanaugh just voted to back a very restrictive state law to eliminate access to abortion for most people who live in Louisiana, making abortion unavailable everywhere there but a single clinic, according to abortion rights experts and advocates in the state. This was considered a very significant case.

Kavanaugh taking a position in the minority against the current precedent protecting choice. And this is something he's doing as soon as he joined the court. Note, that's what his conservative backers expected, and note, that’s what his liberal critics expected. So it appears one of the only policy experts in the country who would claim to be surprised by this ruling to restrict choice would be Susan Collins. Now, if Kavanaugh had his way, that controversial ruling that I just described drastically restricting choice, that would be law today. And if that approach worked in that state it’d be open season in many other conservative states. The only reason this is so important, the only reason this is not law, is that other justices including a different Republican appointee, John Roberts, voted the other way. Roberts siding with several Democratic-appointed justices to block this law under -- you see where we’re going -- under the Roe precedent that Collins has discussed so much. Now, let’s look at the justices who voted with Kavanaugh. This is so important. Four of them there. So they’re now one vote shy of a majority to do this kind of thing to restrict, drastically, choice and abortion doctors in the United States.

Melber also highlighted Collins’ continued defense of Kavanaugh -- even after his recent vote -- and her allegation that he wouldn’t vote to overturn or weaken Roe:

MELBER: She still claims, even now, that she's doing her part to keep the court pro-choice against all this evidence. And responding to Kavanaugh’s new opinion, she cites this as a “very careful dissent” as proof the idea he would still repeal Roe is quote “absurd.” Is it? Now, we asked Sen. Collins’ office whether, point-blank, she views Kavanaugh’s ruling as a limitation on abortion access, which it is, and a narrowing of Roe’s protection or not. She did not reply to those questions today. But if last fall anyone was unclear how then-Judge Kavanaugh would approach abortion laws on the Supreme Court, the answer is now clear. Facts matter. Now, our report tonight does not in any way pretend to address all the strongly held personal, moral, and religious beliefs on abortion in the Senate or across our nation. But it does reveal that in this important debate, full of people in power and out of power standing up for their views, taking risks for their views, fighting for years for their views -- Sen. Susan Collins’ record reveals herself to be on an unusual island where her stated views are openly, blatantly, repeatedly contradicted by her record.