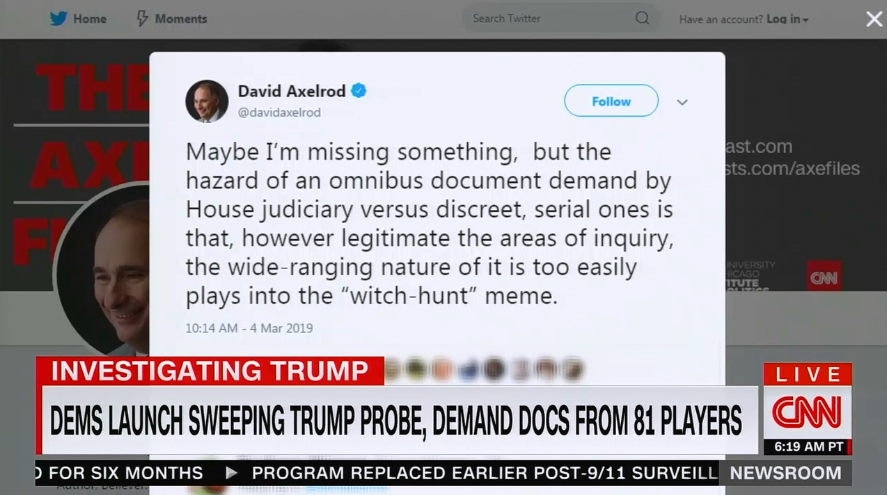 Mainstream media figures are discussing the House Judiciary Committee document requests -- which the committee sent to 81 figures and entities connected to President Donald Trump and his administration -- within the framework of the White House’s narrative that the move is a “fishing expedition.”

On March 4, the Judiciary Committee issued a press release announcing an investigation “into the alleged obstruction of justice, public corruption, and other abuses of power by President Trump, his associates, and members of his Administration.” As committee Chairman Rep. Jerry Nadler (D-NY) explained, “Investigating these threats to the rule of law is an obligation of Congress and a core function of the House Judiciary Committee. We have seen the damage done to our democratic institutions in the two years that the Congress refused to conduct responsible oversight. Congress must provide a check on abuses of power.”

Both Trump and White House press secretary Sarah Huckabee Sanders have responded to the request by denouncing it as a “fishing expedition.” And many mainstream media figures are -- unwittingly or otherwise -- adopting the same narrative, in some cases even using the same language as Trump and his top flack by calling the investigation a “fishing expedition” and in other cases advancing the narrative that the document requests are an “overreach.”

To be clear, Congress has extremely broad investigative authority, with the Supreme Court repeatedly ruling that investigatory powers are central to the legislative branch’s function. And the individuals and entities that are receiving the requests were selected for a reason. As HuffPost noted, “The letters piggyback off the preexisting investigations being run by Robert Mueller’s special counsel office as well as federal prosecutors in the Southern District of New York.” The letters also “inform recipients that, in the interest of speeding up the process, they can limit their production to documents they already turned over in response to those investigations.” And there is ample evidence that the president and many of his associates are deeply corrupt, warranting a large-scale investigation.

The public is also in favor of investigating Trump. A March 5 Quinnipiac University poll found that 64 percent of Americans think Trump committed crimes before becoming president, and 45 percent believe he has committed crimes while president. And by a 58-35 margin, Americans think Congress should investigate former Trump lawyer “Michael Cohen's claims about President Trump's unethical and illegal behavior.”

As The Washington Post’s Greg Sargent noted, those findings are contrary to the mainstream media narrative currently forming around the investigation:

Here are some examples of mainstream media figures and outlets acting as stenographers for the Trump administration’s pushback to the investigation:

Cydney Hargis and Alex Walker contributed research to this post.