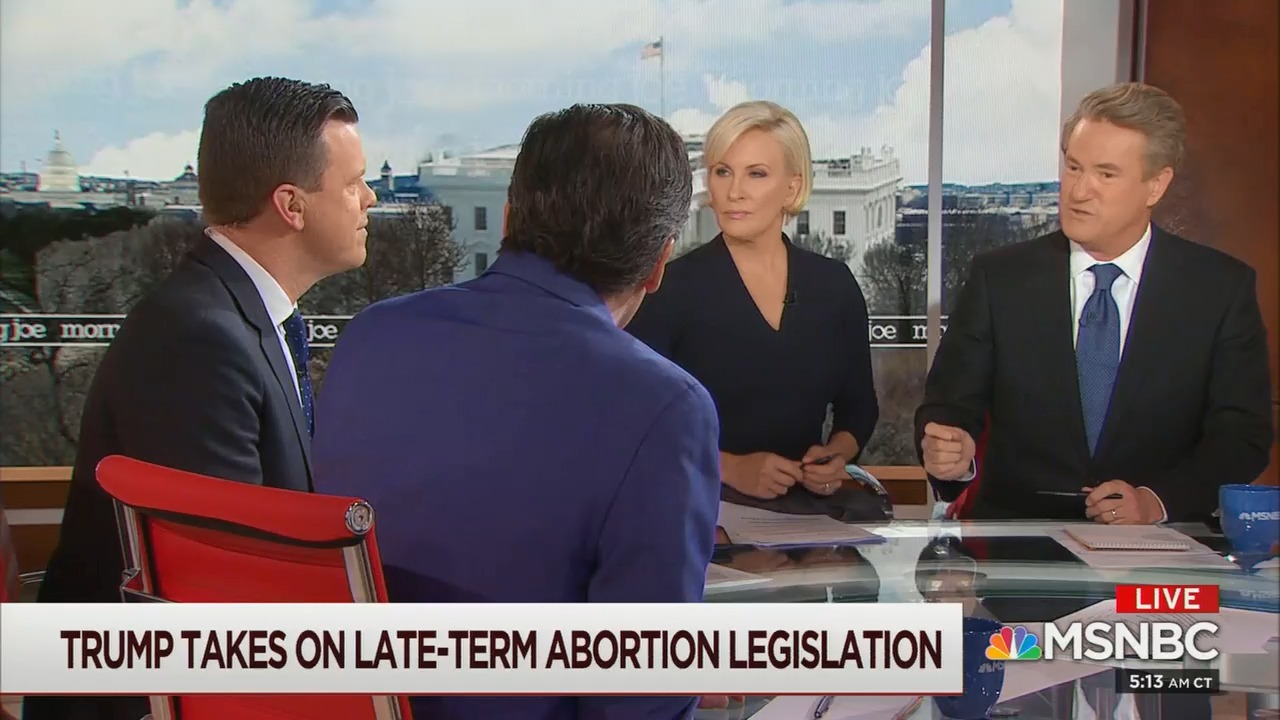 The morning after President Donald Trump’s State of the Union address, MSNBC’s Morning Joe not only promoted his misleading comments about abortion procedures, but the hosts also echoed weeks of sensationalized and inaccurate right-wing media coverage about support for state measures to protect abortion access.

During his 2019 State of the Union address, Trump repeated talking points from a scandal manufactured by right-wing media alleging that Democrats support state bills supposedly legalizing “infanticide” or abortions “up to moment of birth.” In his speech, Trump said that a law in New York “would allow a baby to be ripped from the mother's womb moments before birth” and that a Virginia bill would allow providers to “execute a baby after birth.” He called on Congress “to pass legislation to prohibit the late-term abortion of children.” In reality, Democratic legislators in New York recently passed legislation to codify abortion protections from Roe v. Wade at the state level, and Virginia Democrats introduced a bill to remove unnecessary burdens to abortion access, which has since been tabled. In response, right-wing media have spent much of the past few weeks fearmongering about abortion procedures and spreading misinformation that Democrats are extreme for protecting abortion access.

Although this misinformation has been primarily pushed by right-wing media, the February 6 edition of MSNBC’s Morning Joe was an example of a program repeating these inaccurate talking points to a broader audience. In discussing Trump's address, co-host Joe Scarborough said, “Democrats have a blind spot. They do not understand how out of step with America they are” for “passing extreme late-term abortion legislation,” and he further claimed that it “will cost them votes in states they will need in 2020 if they don't recognize it as a national party.” Co-host Willie Geist agreed, pointing to a June 2018 Gallup poll he said showed a lack of support for so-called “late-term abortion.”

By repeating these anti-choice talking points, Morning Joe amplified right-wing misinformation to an audience beyond Fox News. For example, “late-term abortion” is a medically inaccurate term used to suggest that abortions that happen later in pregnancy are too “extreme,” as Scarborough claimed. In reality, abortions that take place later in pregnancy are extremely rare and often performed for medical necessity or due to access barriers created by anti-choice politicians. Some media outlets’ characterization of these abortion procedures as happening “at birth” -- or in some cases, allegedly after -- is simply wrong; according to medical professionals, such a scenario “does not occur.” Treating abortions later in pregnancy as an “extreme” procedure is stigmatizing to patients and glosses over the specifics of their experiences. As a number of later abortion patients explained in an open letter, “The stories we hear being told about later abortion in this national discussion are not our stories. They do not reflect our choices or experiences. These hypothetical patients don’t sound like us or the other patients we know.”

Morning Joe similarly misinformed viewers about polls showing support for abortions that happen later in pregnancy. Although right-wing media often claim that supporting abortion rights is harmful to the Democratic Party's electoral chances, this is an oversimplification. Polling on abortion-related issues is notoriously complicated, requiring clear questions and language that accurately reflects the realities of abortion access and procedures. Support for abortions later in pregnancy increases when people are provided context explaining that abortions at this stage are often undertaken out of medical necessity or in response to complex personal circumstances.

This isn’t even the first time that Morning Joe has uncritically adopted inaccurate abortion-related talking points from Republicans and right-wing media. During Sen. Doug Jones's (D-AL) special election in Alabama, a Morning Joe panel similarly attempted to make the case that Jones’ “extreme” stance on abortions after 20 weeks would ensure his defeat -- based, in part, on polling about support for abortion restrictions. They were wrong.

From the February 6 edition of Morning Joe:

JOE SCARBOROUGH (CO-HOST): I do want to just say for Democrats, because it hasn't been mentioned much in the mainstream media, and I’m glad you brought up the late-term abortion legislation passed in New York and Virginia. This is such a blind spot for Democrats, just like NRA actions after Sandy Hook, the video games and, again, refusing to pass any reasonable, rational legislation, painted Republicans as extremists. Democrats have a blind spot. They do not understand how out of step with America they are. Not only passing extreme late-term abortion legislation, but then celebrating it. It's a real blind spot for Democrats that will cost them votes in states they will need in 2020 if they don't recognize it as a national party.

MIKA BRZEZINSKI (CO-HOST): Couple of other blind spots we’re going to get to.

WILLIE GEIST (CO-HOST): The most recent reliable polling comes from last June from Gallup shows that 13 percent of Americans support late-term abortion -- 13 percent. By the way, that includes only 18 percent of Democrats --

SCARBOROUGH: -- by the way, guess what, that's about the same number that are opposed to background checks for terrorists and domestic abusers and all the others.