In a February 20 Facebook post, less than a week after the shooting, Nugent shared a February 19 Natural News article claiming “these kids were coached to repeat scripted lines, just like actors reading lines for a movie production.” The article claims that “It’s all scripted, in other words, to push a gun control narrative rooted in emotional reaction rather than constructive solutions" and includes the tags “false-flag” and “hoax.” The bulk of the article is a reprint of Lucian Wintrich’s post at The Gateway Pundit, which first started spreading the conspiracy theory. 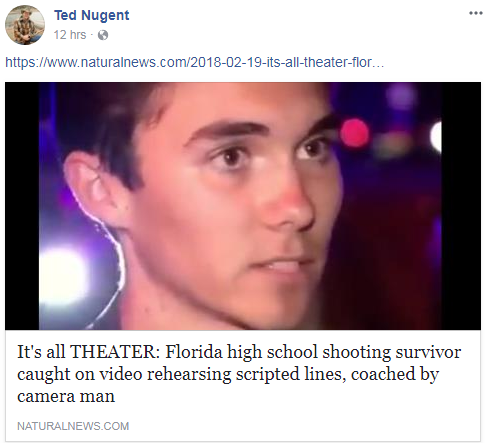 Nugent then “liked” a comment left below his article claiming that one of the students, David Hogg, “is a paid crisis actor” who “has been at multiple shootings as a 'survivor'.” 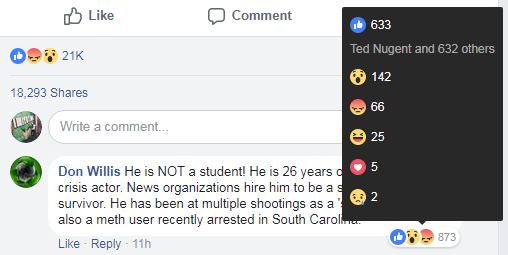 Following the October 2017 mass shooting in Las Vegas, Nugent appeared on conspiracy theorist Alex Jones’ show and backed his baseless theory that the massacre was “scripted by deep state Democrats.”

As recently as February 2016, there were calls for Nugent to resign from the NRA board after he shared a Facebook image claiming prominent Jewish figures were the ones “really behind gun control.”