News Corp.'s long-simmering phone-hacking scandal has reignited, throwing its global media empire into turmoil. As allegations of hacking into private citizens' voicemail increase, media and tabloid practices have been called into question. With a large and influential presence in the United States, News Corp. and its subsidiaries (including Fox News) should be under intense scrutiny in the American press. A Media Matters analysis has found great disparity in the amount of coverage given to the scandal by CNN, MSNBC, and Fox News. 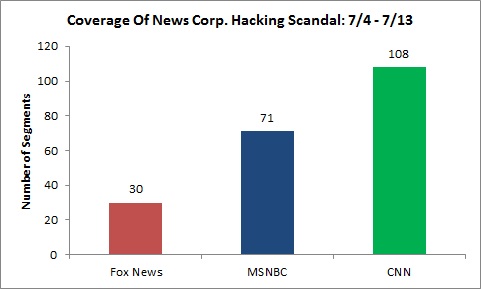 *Media Matters originally reported that CNN had covered the phone hacking scandal 109 times instead of 108. In fact, one of the segments included in that statistic was from The Joy Behar Show, which airs on HLN, not CNN. Media Matters regrets the error.

**Media Matters searched news transcripts provided by Factiva, TV Eyes and Snapstream for the terms “Dowler,” “hacking,” “News Corp.” and “News of the World” between July 4 and July 13.

Three Things You Should Know About NOTW's Hollywood Operation