With no evidence whatsoever, Michelle Malkin tied the decision by Darden Restaurants Inc., owner of the Olive Garden and Red Lobster chains, to cut calories and improve its children's menus to a waiver it has received from a provision of the Affordable Care Act requiring businesses to phase out bare-bones health insurance plans. 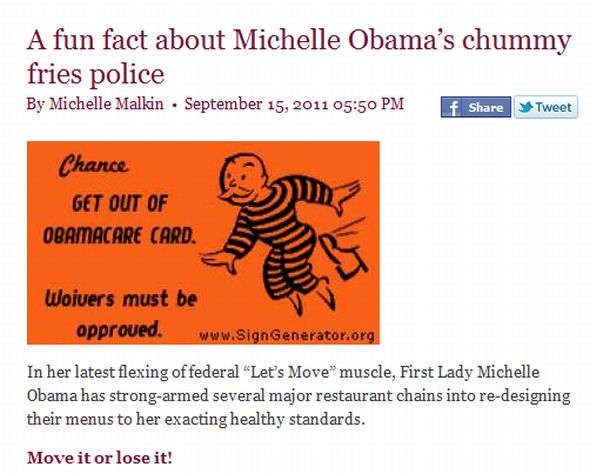 Malkin's accusation follows a long line of false attacks by conservative media who have previously alleged that health care waivers were “blatant cronyism” and “political corruption.”

In fact, Factcheck.org has found that companies from industries that opposed health care reform have been granted waivers from the applicable section of the Affordable Care Act.

Moreover, Malkin falsely claimed that waivers are only given to a “few and fortunate businesses.” In fact, as of May this year, only about 100 waiver requests that had been denied out of over 1300 requested.

Moreover, as Media Matters has previously noted, the U.S. Department of Health and Human Services has published the requirements for businesses to receive a waiver. Waiver applicants must certify that they are in need of a waiver to prevent reduced access to coverage or large premium increases.

Additionally, as Mother Jones explains, the waivers are “essentially a stop-gap measure designed to keep employers from dropping health care benefits all together” until the health insurance exchanges begin operation in 2014:

The White House explains that waivers are granted if conforming to the rules “would disrupt access to existing insurance arrangements or adversely affect premiums, causing people to lose coverage,” acknowledging that the low-benefits plans are sometimes the only option that some employers can offer. The Democrats' rationale is that the other changes under federal health reform will eventually allow employers to receive better, more affordable coverage under the health insurance exchange, when it begins operating in 2014.

To recap: The vast majority of businesses that apply for waivers receive waivers and opponents of health care reform receive waivers. That makes it kind of implausible that Michelle Obama is personally overseeing the waiver process to ensure that restaurants only receive them if they agree to make their menus healthier.