Anti-LGBTQ social media account “Libs of TikTok” is selling merchandise through Shopify, even though the platform claims that its services may not be used “to promote or condone hate,” and is using Instagram’s link sticker feature to direct people there, seemingly in violation of both platform’s policies.

In the last several months, as anti-LGBTQ rhetoric has ramped up on the right, Libs of TikTok has become a favorite among right-wing media figures and outlets. A significant driver in the fabricated “groomer” narrative, its Twitter and Instagram accounts have been used repeatedly to misgender people, target teachers who support their LGBTQ students, and flag Pride Month events, at least two of which were later targeted by white supremacist organizations, including the Proud Boys and Patriot Front.

In February, The New York Post reported that Chaya Raichik, the person behind Libs of TikTok, did have “future plans to monetize her work,” despite her claiming that she doesn’t “do this for money.” However, Seth Dillon, CEO of the conservative satire account The Babylon Bee, announced in April that he had “worked out a deal” with Raichik to “turn her heroic, high-risk work into a career.” It seems that Raichik is now trying to further monetize her anti-LGBTQ platform by selling t-shirts, mugs, hats, and other merchandise emblazoned with the Libs of TikTok logo on Shopify.

Raichik’s use of Shopify to sell Libs of TikTok merchandise seems to be in violation of its acceptable use policy, which states:

Raichik is all too aware of the possible violation. She has already framed the possible banning of her store as censorship, which she will undoubtedly use to try and generate more outrage and engagement, a tactic she is now quite familiar with. 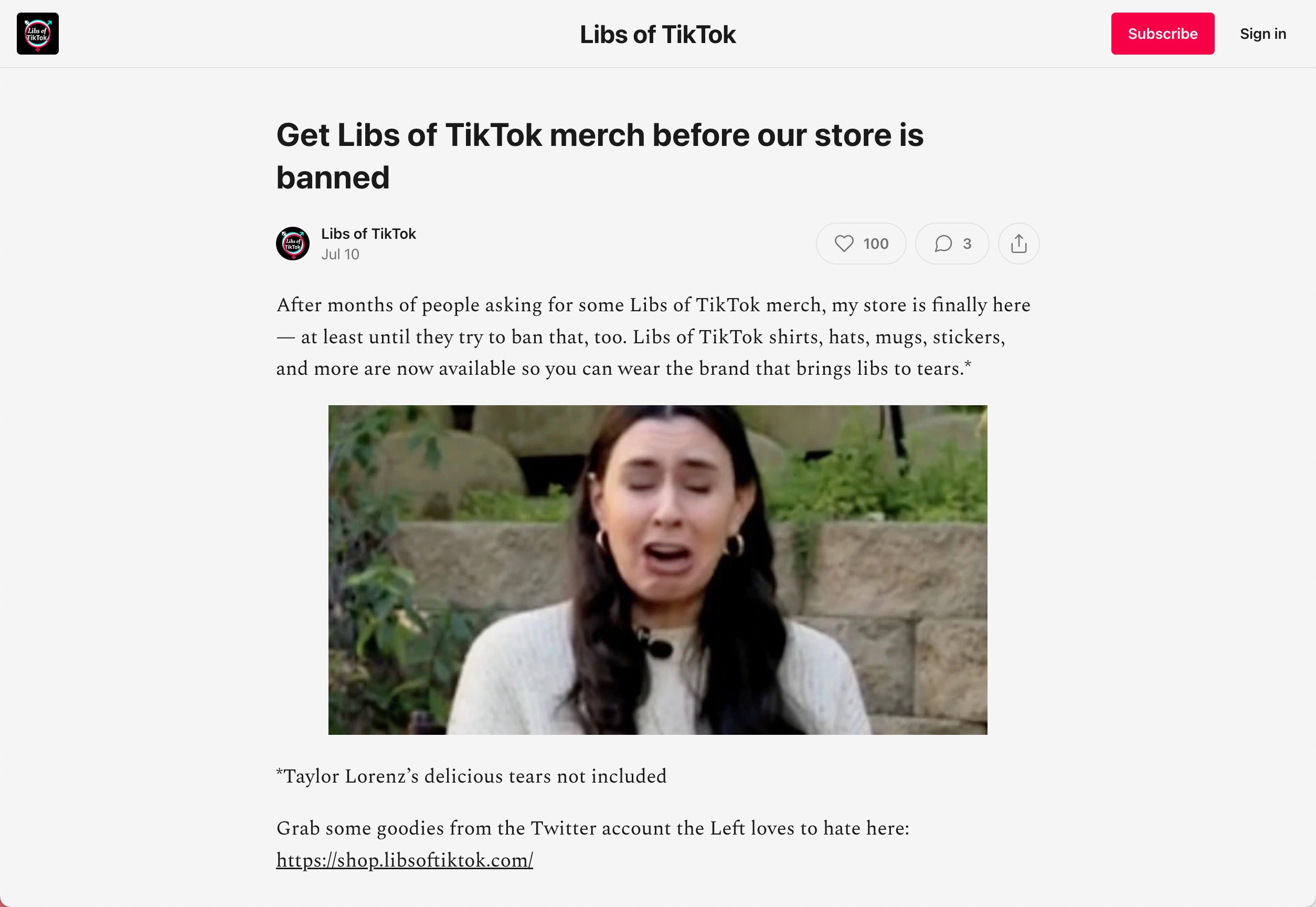 In a statement to Media Matters, a Shopify spokesperson said:

After conducting an investigation, we determined that this merchant is not currently in violation of Shopify's Acceptable Use Policy (AUP). Shopify’s growth has meant that we have increasingly become the platform of choice for anyone looking to sell to their consumers online. We host businesses of all stripes and sizes, with various worldviews. We take concerns around the merchants on our platform very seriously, and Shopify's Acceptable Use Policy (AUP) clearly outlines the activities that are not permitted on our platform.

In addition to Shopify, Libs of TikTok is seemingly also violating Instagram’s policies by using the platform’s Stories link sticker feature to promote the merchandise shop. Instagram also has policies against content that contains “credible threats or hate speech, content that targets private individuals to degrade or shame them,” and the platform claims to be committed to disabling the feature on accounts that “repeatedly share things like hate speech and misinformation, or other content that violates our Community Guidelines.” 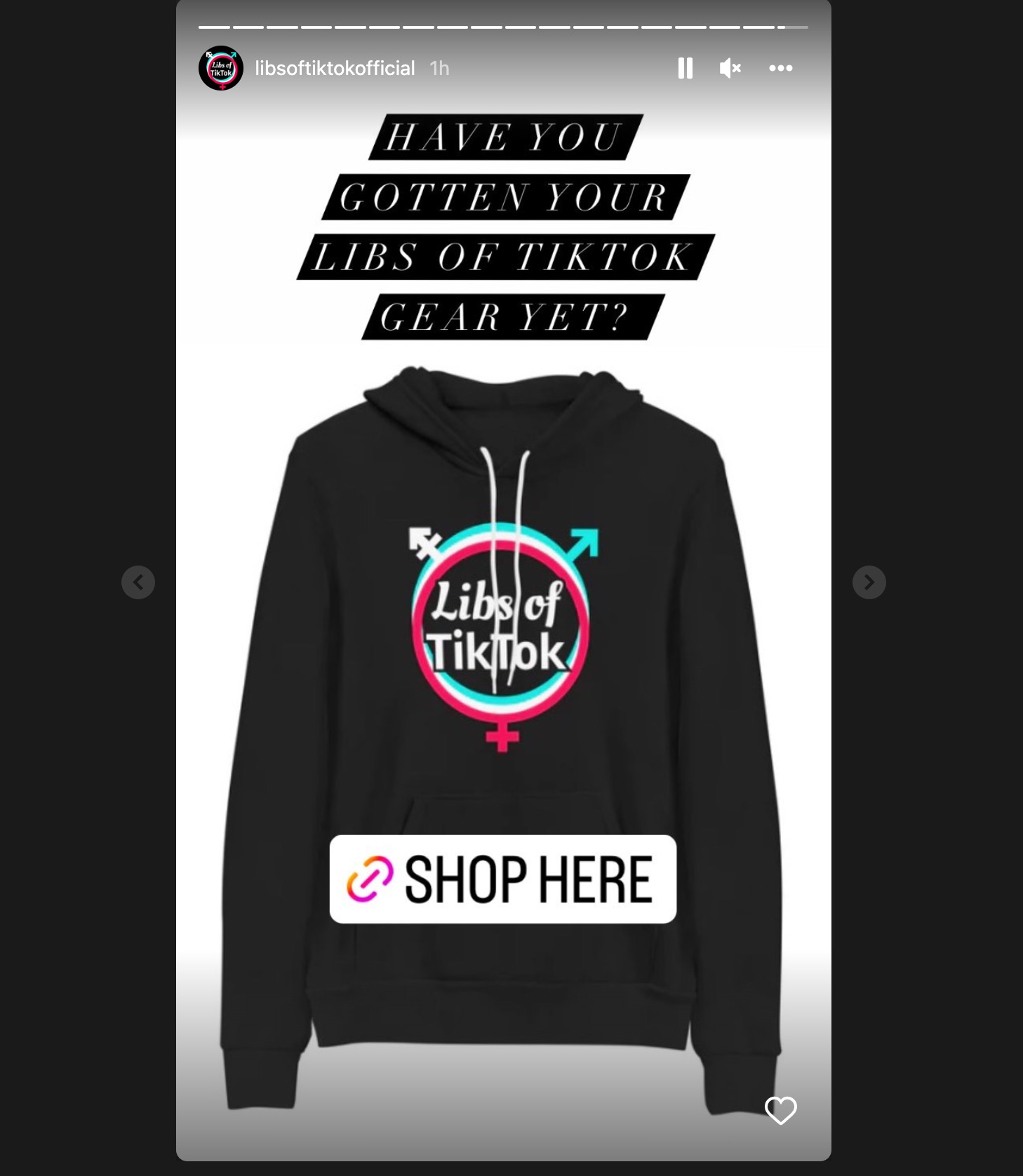 Libs of TikTok has caused a huge amount of harm to the LGBTQ community, especially the trans community. The lack of action by Twitter and Instagram against these accounts violating their policies and spreading the anti-LGBTQ “groomer” smear has gone hand-in-hand with the recent wave of bigoted legislation and attacks on members of the LGBTQ community -- and helped Raichik to make a profit from riding that same wave to right-wing media stardom.