During a press briefing this week, White House press secretary Sean Spicer was asked a straightforward question about whether the president believes that human activity contributes to climate change. “Honestly, I haven't asked him. I can get back to you,” was Spicer’s non-answer.

Spicer acts as one of the president’s closest aides, but he hasn’t asked Trump if he believes in the simple premise of global warming? This, despite the fact that Trump this week took the radical position of triggering the withdrawal process for the United States to leave the historic Paris climate agreement.

More importantly, why are cable news channels still devoted to airing virtually every minute of every Spicer briefing?

Even people on CNN agree, although they’re not quite framing it that way. In the wake of Spicer’s new brand of nearly news-less briefings where the press secretary aggressively delivers few answers and virtually no insights in response to reporters’ questions, CNN hosts had this exchange on Wednesday morning (emphasis added):

ALISYN CAMEROTA: So then Sean Spicer goes to the podium with the press; and he can't confirm or comment on the questions that the press has about Jared Kushner and whether or not Jared Kushner tried to set up this back channel. So I mean, at what point -- why is Sean Spicer holding these press briefings? You know? What's the point of these?

DAVID GREGORY: There's really no point. And what's unfortunate for Sean Spicer is that the White House press secretary position under President Trump doesn't have credibility.

That same day, CNN’s Dylan Byers detailed just how little substance Spicer now delivers at the briefings, noting, “For two days in a row, since returning from President Trump's trip abroad, the White House press secretary has held uncharacteristically short press briefings in which he claimed not to know the answer to questions, outsourced questions to other officials or dismissed the premise of questions entirely.”

The trend has been on display for weeks. “Sean Spicer appears to be staking out a new approach: Say hardly anything at all,” US News & World Report noted in mid-May.

The conclusions being drawn here are correct. Whether out of frustration with bad new cycles, or because of looming personnel changes in Trump’s communications team, the White House has decided to make the daily press briefings perfunctory events specifically designed to not inform reporters. (Trump last month floated the idea of canceling the briefings all together. More recent reports say the on-camera briefings may decline in number, and Spicer briefed reporters off-camera on Wednesday.)

Lowering the information curtain even further, Spicer announced on Wednesday that all questions about ongoing Russia investigations would have to be posed to Trump’s personal attorney and that Spicer would no longer be addressing what’s perhaps the most pressing political issue facing this administration.

Which brings me back to what seems like an obvious point: It’s time for cable news to pull the plug on its devotion to airing virtually every Trump White House press briefing in its entirety.

The briefings are rarely newsworthy, they’re deliberately not informative, and they are filled with misinformation. The fact that they’re televised every day sends a clear signal from corporate media that The Donald Trump Show is worth broadcasting even when it has negative value in terms of informing viewers -- and even though it’s a major shift in practice from how press briefings were treated at the end of the Obama administration.

That brand of obedient programming leads to a kind of breathless mindset that’s more synonymous with a wartime culture news reporting (i.e., Everybody stop what you’re doing -- the White House is about to make a statement!).

Are there days when it would make sense to air Spicer’s briefings, or portions of them? Of course. Just like there were times during the Obama administration when it made sense to occasionally air its briefings. But there’s simply no justification for nonstop coverage, especially when the briefings are built on deceits, and when they’re designed to foil honest inquiries.

Note that Spicer’s current trend toward even less briefing information comes from a press secretary who had already drastically reduced the length of briefings. Compared to Spicer’s predecessor in the Obama administration, Josh Earnest, the Republican’s daily briefings so far run approximately 40 percent shorter in time, which means far fewer questions get asked. “Earnest allowed 2,574 follow-up questions while Spicer allowed only 1,919 over the same number of briefings,” according to a Media Matters study that looked at Spicer's first 48 briefings and Earnest's last 48.

And yet, CNN, Fox News, and MSNBC each aired at least 93 percent of Spicer's briefing time, compared to just 2 percent for Earnest's: 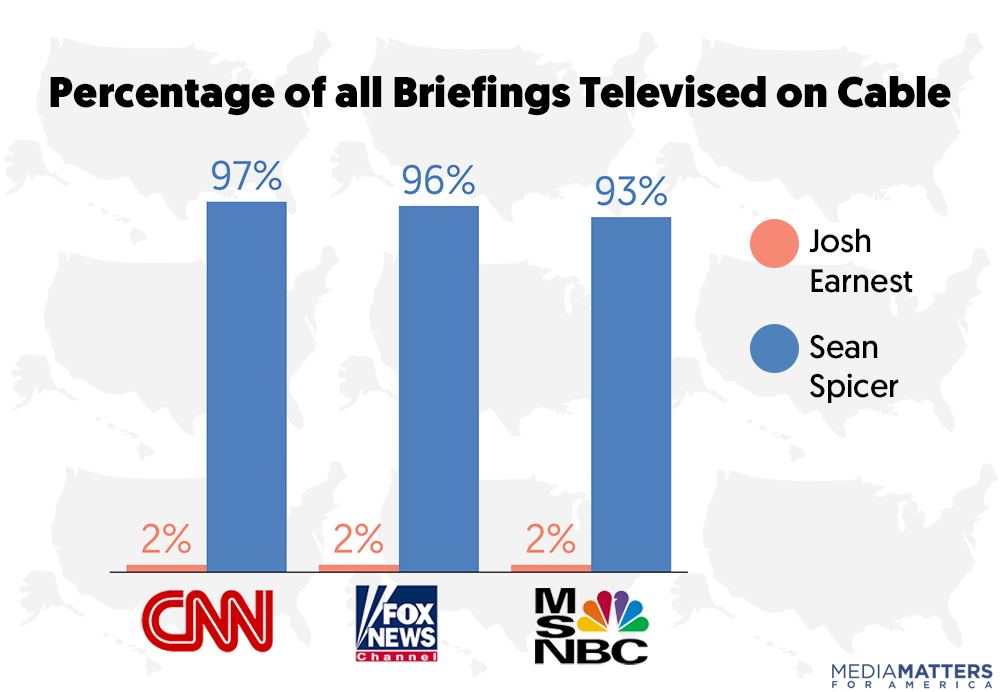 Two important points: First, there’s been something of myth created that Spicer’s briefings produce great cable news ratings, and that’s why they are aired each day. A February 10 New York Times article was responsible for that idea, but the Times article itself didn't actually show that much of a bump.

The paper claimed cable news ratings increased “10 percent” during Spicer briefings. But in the world of cable news, which has a relatively small audience to begin with and where ratings tend to be volatile, a 10 percent gain doesn’t mean much. (Prime-time cable news ratings fluctuate by more than 10 percent all the time.) If Spicer’s briefings produced a 40 or 50 percent spike in ratings, that would suggest some sort of phenomenon. But they don’t.

And even if Spicer is giving a big ratings boost, that's still not a good excuse for actively misinforming viewers by broadcasting all the briefings.

Second, there’s an idea that since all three cable news channels religiously carry the briefings, it would be difficult for one to step away. But CNN already did that once, and the network should do it again.

Back on the night of January 21, when the White House was fuming about coverage of Trump’s inauguration and how the press was noting how small the crowd was that day, Spicer addressed reporters in the briefing room and CNN deliberately opted not to air it live.

Producers “decided to see what was said at the press event, according to a person familiar with the network, then play relevant parts as deemed necessary,” Variety reported.

It’s time for CNN and its competitors go back to that model.