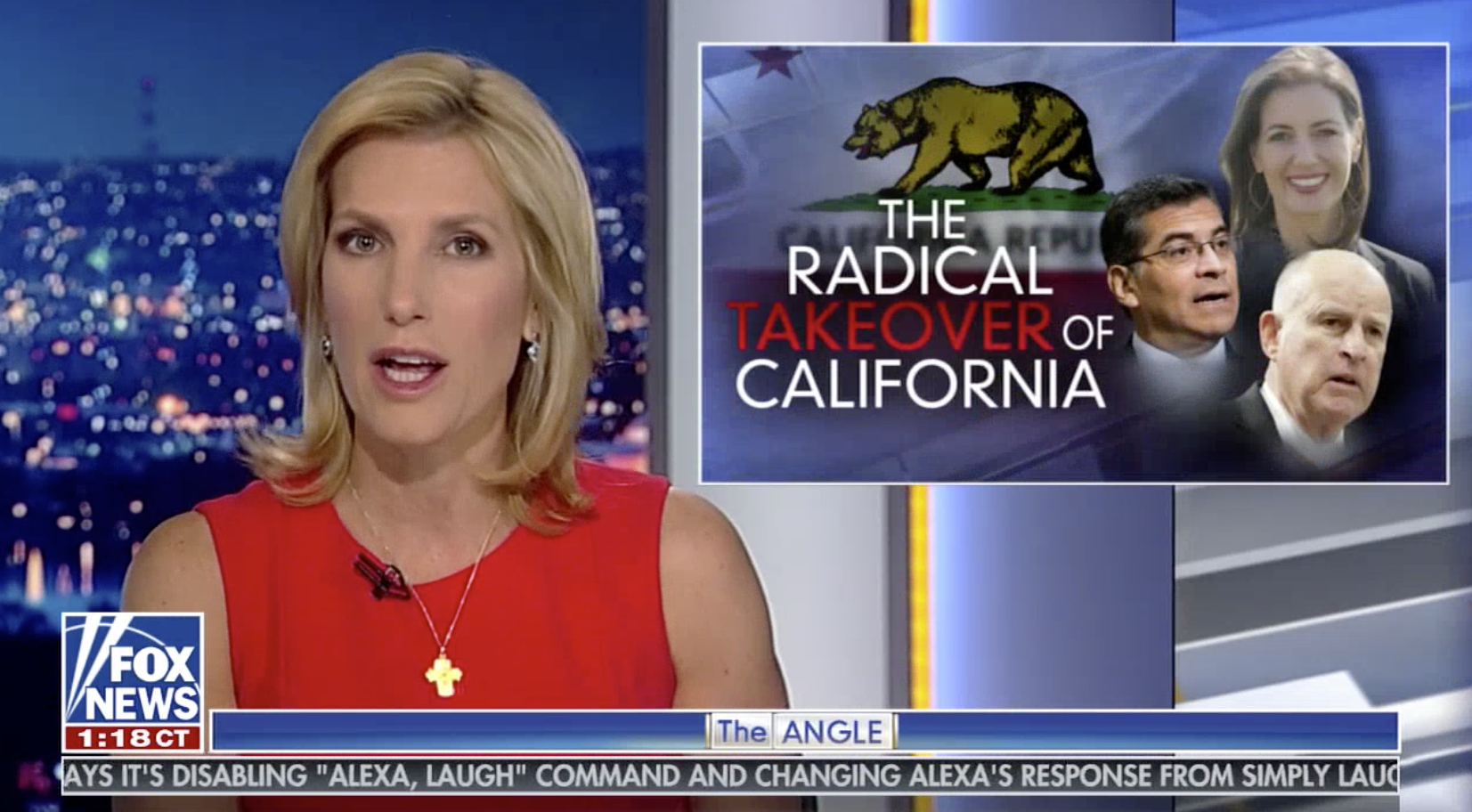 On March 6, the Department of Justice (DOJ) filed a lawsuit against the state of California, Gov. Jerry Brown, and California Attorney General Xavier Becerra, claiming that three of the state’s immigration laws violate the supremacy clause of the Constitution. The lawsuit is the culmination of an ongoing battle between California and the federal government over the latter’s anti-immigrant policies -- a battle in which Fox News is playing a crucial role.

For years, Fox has repeatedly accused California lawmakers of “placing illegal immigrants and illegal activity over citizens” and violating federal law. Now, the network is using the administration’s very own talking points and propaganda in an attempt to tip the scales in the lawsuit.

Fox is also digging in on its long-running false narrative that undocumented immigrants pose a public safety threat to average Americans to justify the DOJ’s claims.

Fox host Laura Ingraham recited claims from the White House about undocumented immigrants who allegedly committed crimes and were released from local jails despite requests from U.S. Immigration and Customs Enforcement (ICE) to hold them past their proper release dates. Fox’s Harris Faulkner welcomed Rep. Darrell Issa’s (R-CA) sweeping depiction of undocumented immigrants as members of the gang MS-13 -- a frequent characterization made by President Donald Trump -- and joined him in hyping the idea of immigrants as criminals. Faulkner later falsely claimed that ICE is targeting for deportation only “people who have so been identified that they endanger the rest of us.”

In reality, only about half of the immigrants detained by ICE during the most recent raid in California had serious criminal histories, and ICE has made clear that any undocumented immigrant caught up in a raid is subject to ““immigration arrest, detention and, if found removable by final order, removal from the United States.” According to CNN, ICE arrested 46,000 people without criminal records in Trump’s first year in office, “a 171% increase in the number of non-criminal individuals arrested over 2016.”

Even a Fox correspondent who, presumably, should report the news without bias characterized undocumented immigrants as “fugitives” who “remain at large.” CNN has reported that ICE has recently added “ICE fugitives,” which originally referred to people with final orders of deportation, to the category of “convicted criminals,” allowing the agency to misleadingly claim that 92 percent of immigrants arrested under Trump had criminal convictions when in reality that number is closer to 70 percent.

Regardless, Fox News has taken a clear position in favor of deportations and has taken to cheering on ICE raids despite the devastation they reap on local communities and families:

And while Fox has criticized California laws that prohibit local law enforcement and private employers from cooperating with ICE, the network has made little mention of a third aspect of the DOJ lawsuit that aims to prevent California from overseeing federal immigrant detention centers, which are rife with human rights abuses. This is unsurprising given the network’s indifference to the mistreatment of immigrants in detention.

While Fox News has long been a purveyor of false information surrounding immigration, the network has of late taken a decisively aggressive and propagandistic tone in the spirit of advancing the policies of a fiercely anti-immigrant administration.