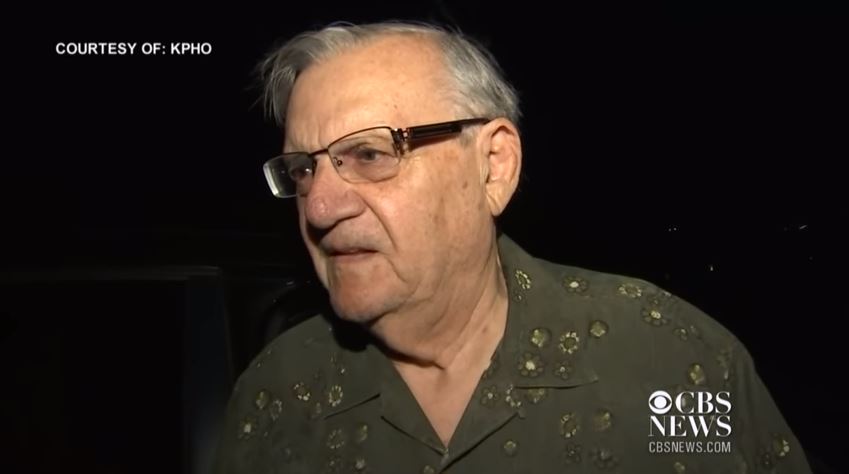 Joe Arpaio, the racist Arizona sheriff who was recently pardoned by President Donald Trump, gave another interview to an anti-Semitic publication that has repeatedly pushed claims that the Holocaust is a “hoax.”

Trump pardoned Arpaio on August 25 after he was convicted of criminal contempt of court for deliberately violating a court order regarding his racial profiling of the Latino community. As the Phoenix New Times has documented, Arpaio -- who was voted out of office last November -- had “fostered horrendous jail conditions, reckless police operations, and carried out personal vendettas against political rivals and members of the press. ... Foremost, he and his deputies have violated the Constitutional rights of brown-skinned U.S. citizens and have committed outright cruelty against the undocumented.”

American Free Press published a September 15 piece by "roving editor" Mark Anderson stating that it “recently” interviewed Arpaio to combat “the false narrative that Arpaio had engaged in ‘racial profiling’ when his deputies apprehended illegal alien suspects.” The piece shared details from their conversation, including regarding Arpaio’s campaign that falsely claims former President Barack Obama’s birth certificate is fake.

The Anti-Defamation League (ADL) has described American Free Press as “an anti-Semitic conspiracy-oriented news­pa­per” that attracts “the most vit­ri­olic anti-Semites.” The New York Times wrote that the late Willis Carto, who helped found the publication, “used lobbying and publishing to denigrate Jews and other minorities and galvanize the movement to deny the Holocaust."

American Free Press has repeatedly promoted Holocaust denial and other blatant anti-Semitism (the site scrubbed some of its Holocaust content following Media Matters criticism earlier this year). Headlines on the site have included:

The site’s bookstore sells The Holocaust Never Happened & The CIA Killed JFK, a book that claims to “destroy the hoax of the 6 million Jewish victims of Nazi Germany”; and another book claiming “that the official narrative of the Holocaust cannot be sustained.”

Arpaio has given interviews to the publication in prior years. The disgraced sheriff granted an interview to the late writer Victor Thorn in 2014, as the Phoenix New Times noted. Thorn -- who died in 2016 -- penned the books The Holocaust Hoax Exposed: Debunking The 20th Century's Greatest Fabrication and MADE IN ISRAEL: 9-11 And The Jewish Plot Against America, which were both promoted by American Free Press.

Arpaio also spoke to Anderson in December 2016 and vowed that he is “not going to go away.” Anderson concluded his article by writing that “we can only hope Arpaio’s career is not over. America needs more men like him.”

The former Arizona sheriff -- like Team Trump -- has also had no problem associating with other toxic media, including 9/11 conspiracy theorist Alex Jones. Mark Anderson is also a 9/11 truther. He has written that “the federal government’s conspiracy theory [about 9/11] is the height of absurdity” and “this newspaper, among other alternative media, has been aggressively challenging the government’s 9-11 conspiracy theory over the years, with the much-in-demand September 5, 2011 special 9-11 edition of AFP being the latest effort in that initiative. Dozens of copies were distributed at the debate. The government’s story is weakening, but it’s difficult to overcome the conventional story.”