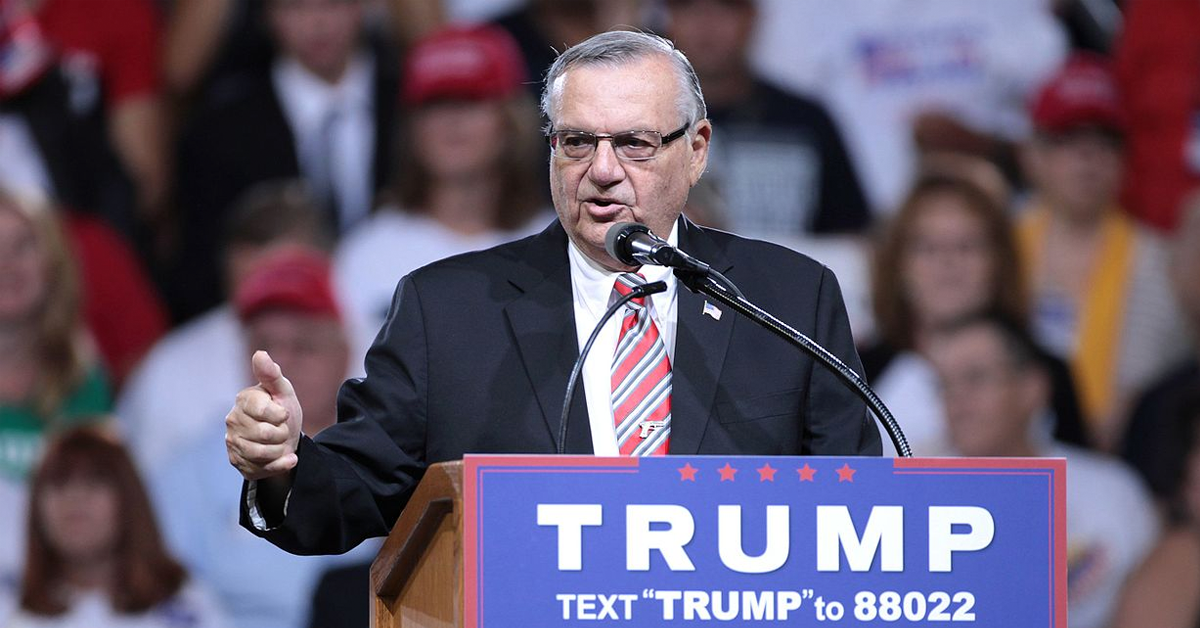 Arizona U.S. Senate candidate Joe Arpaio, who has repeatedly given interviews to the anti-Semitic publication American Free Press, is defending the outlet and refusing to criticize its content.

Media Matters has documented that Arpaio, who was pardoned by President Donald Trump last year for his criminal contempt conviction, gave an interview to American Free Press in January to promote his Republican Senate bid. That outlet has published blatantly false and anti-Semitic claims over the years, including that the Holocaust is a “hoax” and 9/11 was a “Jewish” plot.

The Arizona Republic’s Dan Nowicki reported that “Arpaio declined to criticize it or other anti-Semitic content associated with the publication.” Arpaio instead praised the publication, stating that his interviewer -- “roving editor” Mark Anderson, who has a promoted conspiracy theories and anti-Semitic material -- has “written some good stories, especially on my situation. … I think he wrote one a little while back that was very honest. I can't say that for other publications."

Arpaio -- an extremist who has repeatedly violated people’s rights, especially of those in the Latino community -- also suggested that he doesn’t want to criticize an outlet like American Free Press because he believes in the First Amendment:

“I'm not going to criticize the news media like you,” Arpaio told The Arizona Republic. “I can't believe another news outlet is criticizing a newspaper.”

Arpaio said he has never read a print version of the “American Free Press” and doesn't have a computer to read it online. But the First Amendment allows outlets to publish controversial opinions, he said.

“If I turned down everybody that writes stories I didn't agree with, I probably wouldn't be talking to anybody,” Arpaio said. “I can't believe this, how one journalist's organization would criticize another one when we have free speech in this country.”

But that defense is bogus given Arpaio’s background: He’s been an enemy of press freedom and launched his campaign by attacking the purported “fake news media.”

The Phoenix New Times doggedly reported on Arpaio’s numerous abuses of power when he was the Maricopa County sheriff and noted that he “responded to New Times’ incessant attention by banning its reporters from his press conferences, putting off or ignoring the paper’s requests for county records, and threatening its reporters with arrest.”

In 2007, Arpaio actually orchestrated the arrest of New Times co-founders Michael Lacey and Jim Larkin on bogus charges. The county attorney later declined to prosecute the case and Lacey and Larkin won a $3.75 million settlement. The settlement money was used to launch "the Frontera Fund, a unique initiative intended largely to benefit the Hispanic community that has borne the brunt of the racial animus and civil rights abuses in Arizona.”

UPDATE: Arpaio tweeted: “It was brought to my attention I gave interview to publication that supports antisemitism; I was unaware and don't support that view point.”

But the media has previously informed Arpaio about the publication’s anti-Semitism. In 2014, Stephen Lemons reported in the Phoenix New Times that Arpaio granted an interview to the late anti-Semitic writer Victor Thorn for American Free Press. He also “inquired about the interview with” the Arpaio’s office, which didn’t appear to care:

"The Sheriff does hundreds of interviews with different people and doesn't do background checks on them before he does them. The topic of this interview was immigration, I'm sure you have it.

“The Sheriff wanted me to point out that Victor Thorn also spoke to Jessica Vaughan a former U.S. State Department Official. The Sheriff has an open door policy and speaks to everyone, except you. So to answer your question yes, he did do the interview.”

Calling Vaughan “a former U.S. State Department Official” may be technically correct (the MCSO apparently is quoting Thorn in doing so), but her bio with the nativist Center for Immigration Studies, for which she works, is more precise.