A far-right group with connections to both the “Stop the Steal” campaign and the Proud Boys gang is trying to rewrite history on the January 6 insurrection by pushing a debunked false-flag conspiracy theory that has spread across fringe media and caught the attention of Fox News hosts and Republican members of Congress.

During a congressional hearing on October 21, Rep. Thomas Massie (R-KY) questioned Attorney General Merrick Garland about whether FBI agents or assets were present at the Capitol riot on January 6, 2021, playing a video of a man who was later publicly identified as Ray Epps.

Epps is a Trump supporter from Arizona who was captured in a January 5, 2021, livestream from far-right figure Anthime Gionet, also known as Baked Alaska, telling a crowd to enter the Capitol the next day. Gionet’s video, additional footage showing Epps outside the Capitol during the siege, and the FBI’s removal of his name from its wanted list without any charges spurred the false-flag conspiracy theory that FBI agents provocateurs had secretly incited the attack. Though this notion has been thoroughly debunked, it has spread across social media and has been increasingly pushed by right-wing media and politicians, including Fox hosts.

Roughly an hour later, the group compiled clips of Epps and shared them from its social media accounts on Twitter, Telegram, Instagram (including stories), and Rumble.

Stop Hate’s founder David Sumrall says that he initially created the group in the early 1990s, after the riots in Los Angeles following the acquittal of police officers for brutally beating Rodney King, a Black man. But in the last few years, Sumrall’s group has been involved with far-right events including the January 6 insurrection and the Stop the Steal campaign that helped incite it.

The group is intent on pushing revisionist history and has created a “documentary” about the Capitol attack called Righting History: The Journalistic Battle of January 6th, which has also been promoted by Infowars’ streaming platform. Sumrall has also been going on fringe shows to discuss January 6 and related conspiracy theories, and the group is even fundraising for January 6 defendants, calling them “political prisoners.”

Notably, at least three members of the group’s team — Daniel Goodwyn, Shawn Witzemann, and Jesus “JD” Rivera — have been charged in connection with January 6, and their fundraisers are promoted on Stop Hate’s website.

Other members of the team — Sumrall and Tayler Hansen — were also in Washington, D.C., on the day of the riot, after asking for donations on Twitter to fund the trip. 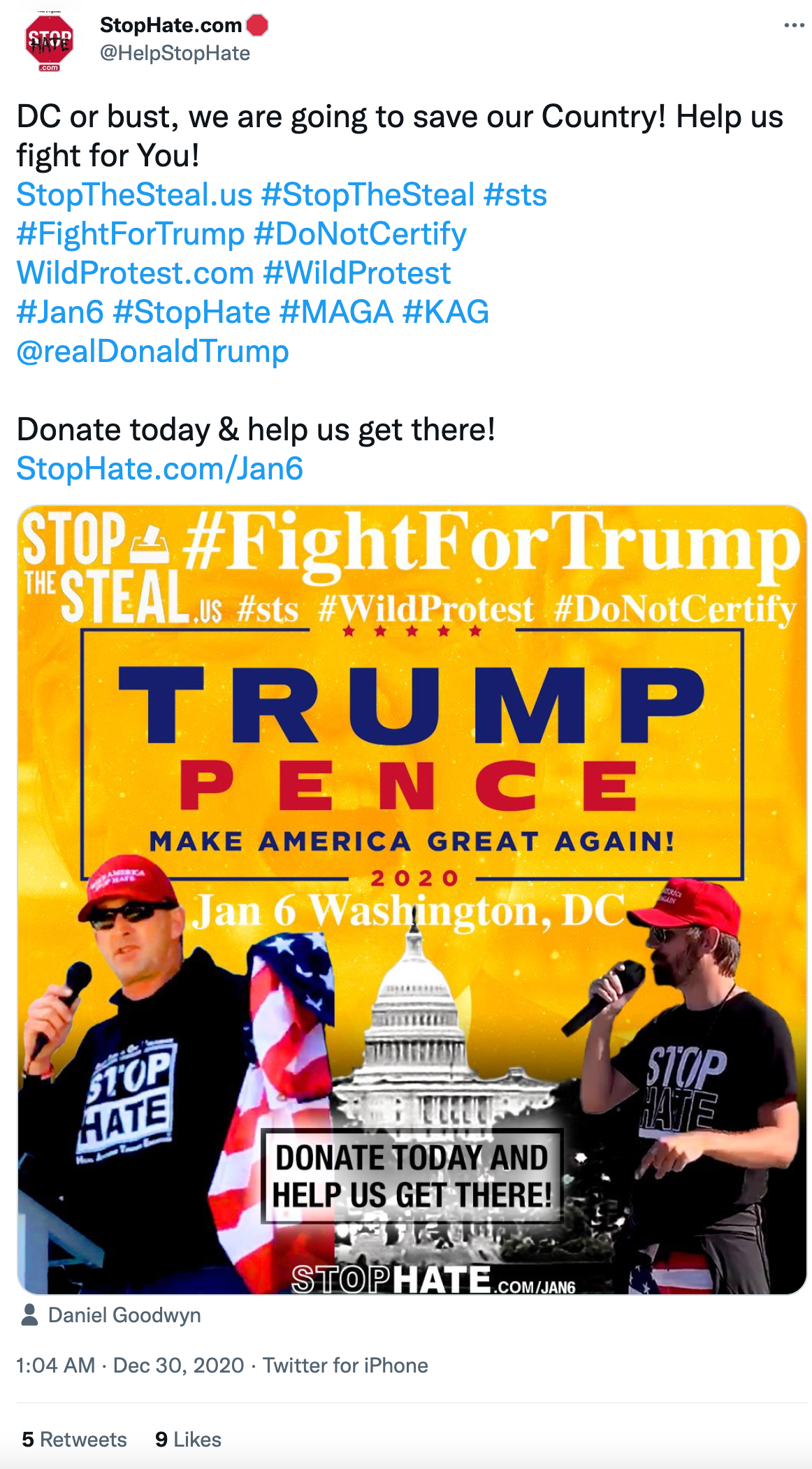 Prior to the Capitol attack, Stop Hate was already involved with the Stop the Steal campaign and other far-right groups and figures.

Stop Hate participated in multiple Stop the Steal events in Austin and Dallas, Texas, along with far-right organizer Ali Alexander. 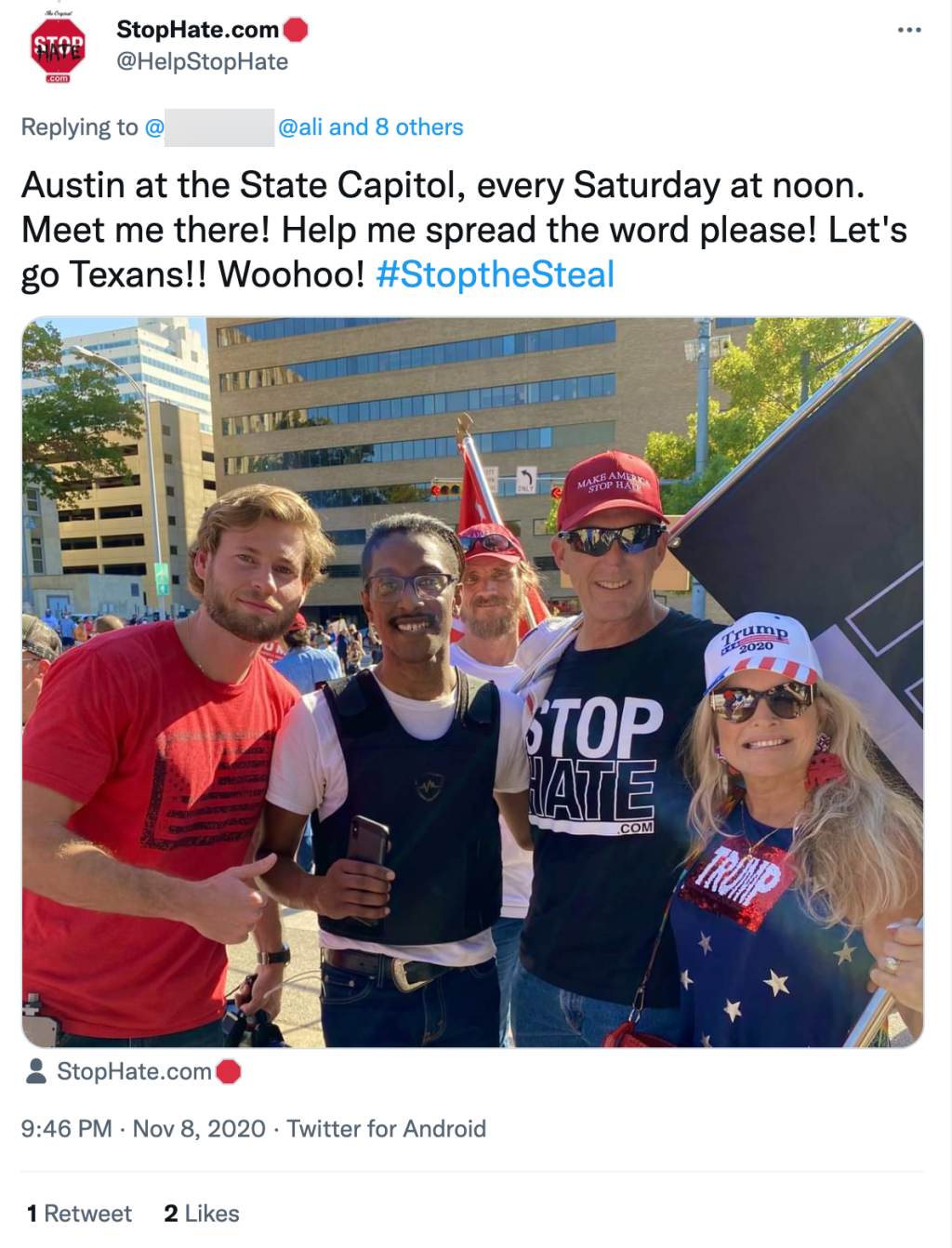 Sumrall has been pictured with Alexander as far back as 2019, when Stop Hate helped organize a “Demand Free Speech” rally with the far-right Proud Boys gang. The event was attended by Alexander and several other far-right personalities including Milo Yiannopoulos, Gavin McInnes, and Laura Loomer.

Following Stop Hate’s tweets about Epps on June 16, the conspiracy theory was shared by far-right social media accounts on 4chan, 8kun, Gab, Rumble, Telegram, and Twitter. On July 24, a Twitter account with over 22,000 followers shared a video of Epps, describing him as a “suspected undercover Federal Operative,” and eventually gave credit to Stop Hate for helping to uncover “the true narrative.”

On July 25 — a day later — Massie quote-tweeted the Epps video, asking, “Who is this guy?” Stop Hate even responded to his tweet. 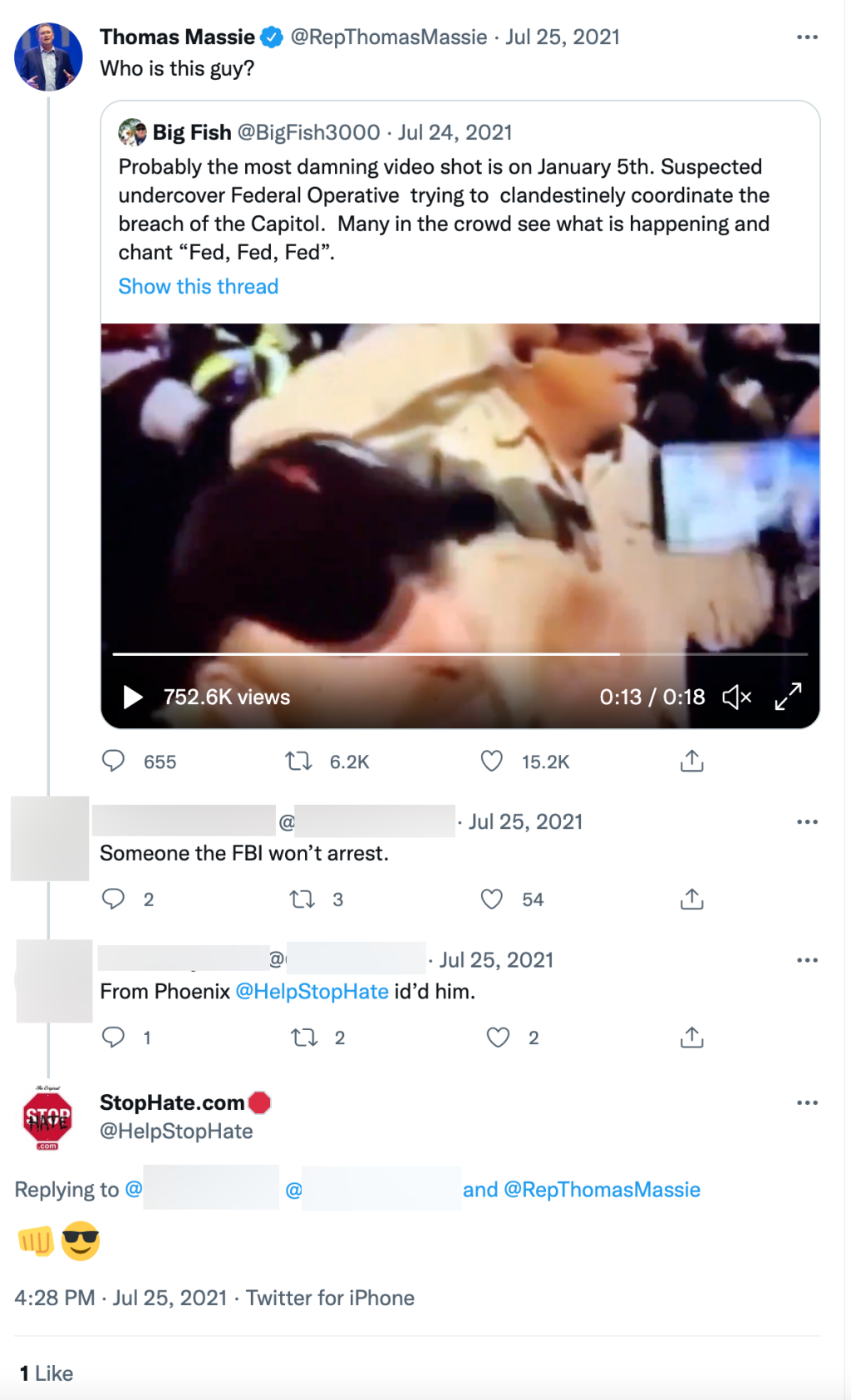 The video that Massie played for Garland during the congressional hearing in October was similar to the video he shared on Twitter in July. Stop Hate shared a clip of Massie at the hearing on Instagram, thanking him for peddling the conspiracy theory. 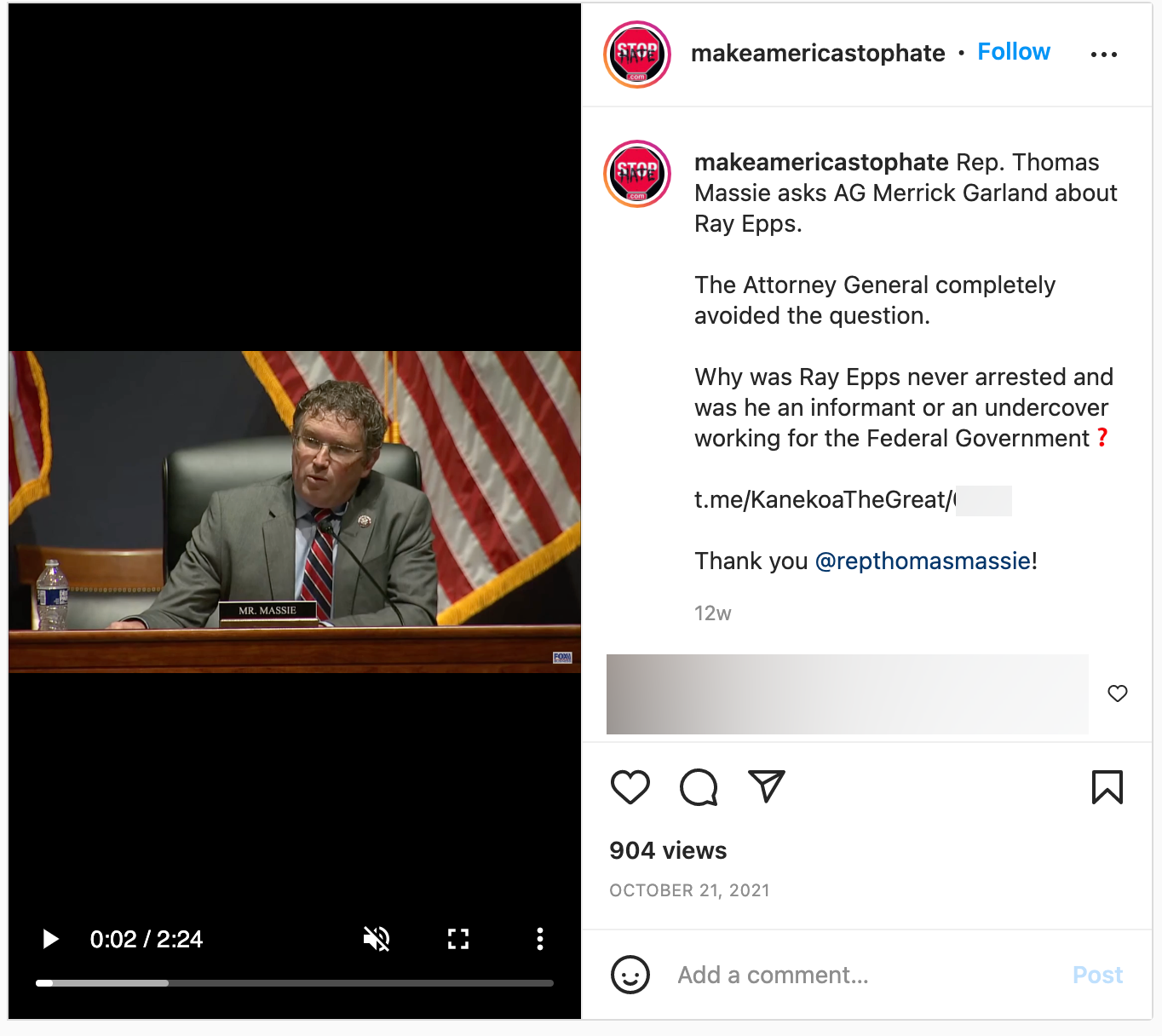 Stop Hate has repeatedly pushed conspiracy theories about the January 6 insurrection, particularly false claims that the FBI and/or antifa was involved in a false-flag attack, even though the right-wing group itself encouraged people to “Storm The Capitol.” The spread of the Epps conspiracy theory all the way to Congress shows how the far-right fringe is using social media to rewrite history of the Capitol insurrection.