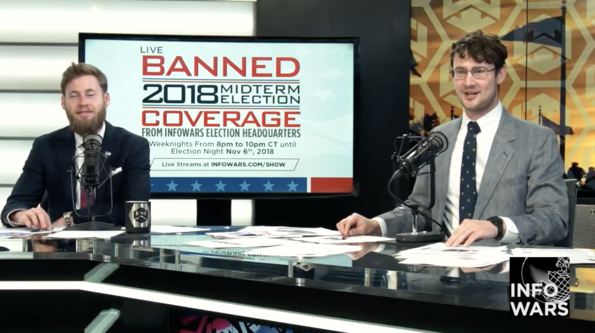 Harrison Smith, a contributor to Alex Jones’ Infowars outlet, said that he is going to vote in a district he doesn’t live in because he failed to update his voter registration before Texas’ deadline. The comment came during a segment in which Smith introduced himself as one of the co-hosts of a new Infowars show focused on 2018 midterm election coverage and accused Democrats of breaking election laws.

Smith announced the new show during the October 9 edition of Infowars’ weekday afternoon show War Room, which is broadcast on Facebook, Infowars.com, and through terrestrial radio. War Room host Owen Shroyer and Jones will join Smith in hosting the show, which will air for two hours every weeknight until the November 6 elections under the banner “Banned 2018 Midterm Election Coverage.” Disturbingly, Infowars’ claims about elections have been previously promoted by the president: Trump’s lie that he “won the popular vote if you deduct the millions of people who voted illegally” originated with the outlet.

Speaking to Shroyer, Smith encouraged listeners to register to vote before deadlines to “match these numbers that the Democrats are talking about,” and then said, “Don’t put it off until the last day like I admit I did. I was on my way to the post office to mail my voter registration when I get a call saying, ‘Hey, can you host the War Room today?’ So I will have to go back to my old district to vote this year.” Shroyer responded, “Oh, my gosh. I cost you a vote.”

Texas law requires that individuals who move from one county to another submit a new voter registration application in person or via mail. Smith, who is based in Austin, TX, where Infowars’ studios are located, does not appear in public records of voters registered in Travis County, where Austin is located. He does, however, have an active voter registration in a different Texas county located more than 150 miles from Austin that started on January 1 and runs through 2019. Texas has been hypervigilant in prosecuting illegal voting cases, even in instances where the person being prosecuted didn’t realize they were violating voting laws.

Moments later, Shroyer accused Democrats of violating election laws. Shroyer said that Democrats are trying to “rig” the upcoming elections by eliminating the Electoral College, advocating for 16-year-olds to vote, and “obviously the old story, the non-citizen vote, the illegal immigrant vote.”

Shroyer suggested reporting election law violations to Texas officials and said, “Better watch out, Democrats, your desperation is leading you down a long, dark pathway of illegal criminal behavior that’s going to catch up with you.” Smith responded, “If only law applied to Democrats like it does to conservatives.”