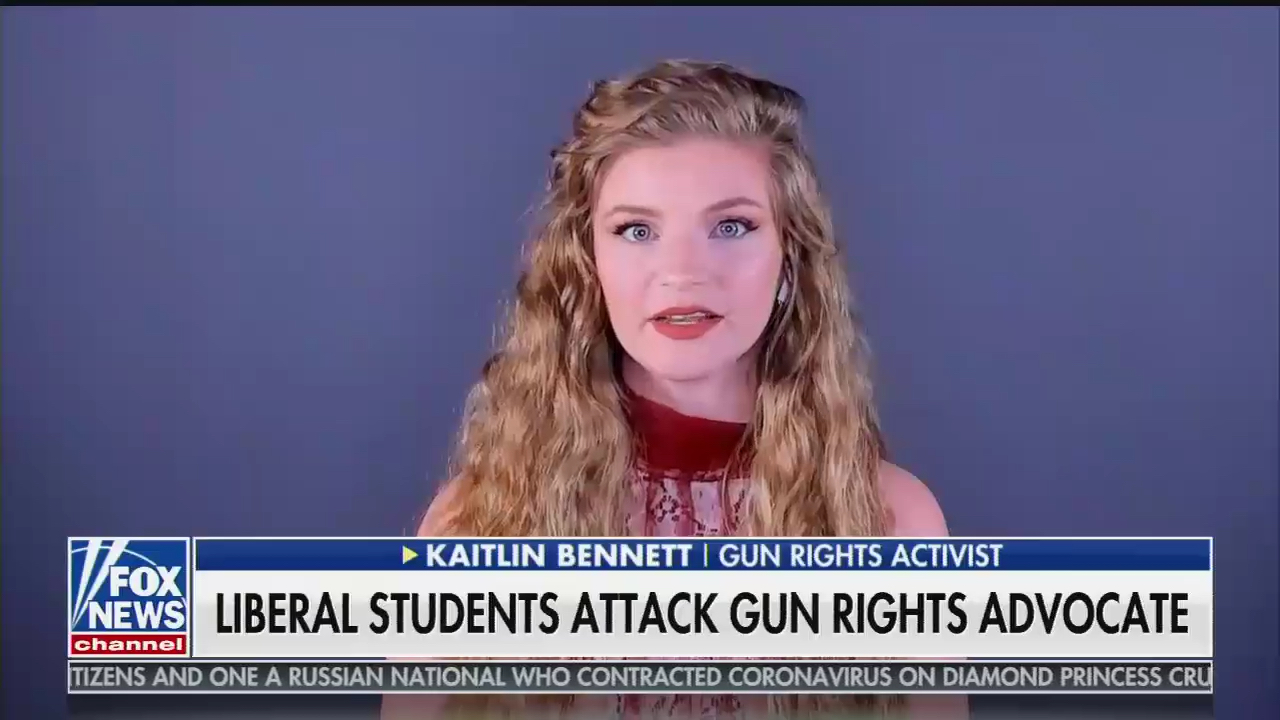 Fox News hosted far-right troll Kaitlin Bennett one one of its programs -- where she made a direct appeal to President Donald Trump -- without disclosing her ties to extremism, including her work for far-right conspiracy theorist Alex Jones and her association with a pro-monarchist campus group that has denied the Holocaust.

Bennett, who is sometimes referred to as the “Kent State gun girl,” is best known for visiting college campuses to carry out stunts and to film her attempts to troll students, made national news after a large group of students protested a recent visit she made to Ohio University. Bennett claimed that a “riot” broke out while she was on campus, though campus police disputed that, saying in a statement, “Contrary to allegations circulating on social media, the incident did not rise to the level of a riot. There was strong language, and allegations that some unknown person(s) in the crowd splashed water, but there were no reported injuries or violence, and no one was arrested during the event.”

Bennett appeared on the February 19 edition of Fox & Friends First and was identified by the network as a “gun rights activist” who was the victim of a “massive hate riot.” During her appearance, Bennett mentioned that Trump “signed an executive order for public universities in this country to support free speech” and appealed to Trump directly, saying, “President Trump, if you’re watching, I know you like to watch Fox & Friends, please consider what’s going on to Trump supporters on campuses all across the United States.” She added: “Your students, your supporters on these campuses need your help to feel safe on campus and to help you get reelected.”

At no point did anyone mention Bennett’s affiliation with Infowars. The previous day, Bennett had appeared on Infowars program The Alex Jones Show to discuss her visit to Ohio University. Before introducing her, Jones said, “We sponsor her -- I want to thank listeners for supporting us because I’ve been able to double her funding, which wasn’t much, to get two security people.” The conversation that followed demonstrated the extent to which Infowars founder Jones can exert control over Bennett’s campus activities.

Bennett said that as a result of her experience with students at Ohio University, “all they did was prove to me that next time I’m there I will be coming back with an army of gun owners to show that that campus needs campus carry.” Jones, however, had different plans, and instead proposed that within a week Bennett should host an unarmed protest at Ohio University that would be easier to organize.

When Bennett initially demurred on the timing, saying she had to “see what I have going on,” Jones was insistent. He again brought up Infowars' financing of her activities, saying, “I understand you got a crew and all that stuff and that’s great, and that’s why Infowars loves you and that’s why we finance you, what I’m saying is this is big and hot, this is central, a pack of thugs ran you off of campus.” Jones again referenced Infowars financing, saying, “So I’m here telling her -- drop what she’s doing; we need to be there next Saturday or next Sunday.” Bennett acceded to Jones, who then mentioned that the hangup on timing was because Bennett has things she needs to do before her upcoming wedding.

During the interview, Jones also made a similar argument to Bennett’s appeal to Trump on Fox News, saying that a protest at Ohio University “will bring Trump to front and center to take the funding away from that university if they don’t have those police do their job and protect us to exercise our speech.”

During her Fox News appearance, Bennett brought up her affiliation with right-wing campus group Liberty Hangout in passing. She’s a founding member of Liberty Hangout and was previously affiliated with right-wing campus group Turning Point USA, but left after a dispute over members of the Kent State chapter of the group wearing diapers at an event. Liberty Hangout is primarily operated by Bennett and her fiance, Justin Moldow. As anti-fascist website It’s Going Down extensively documented, Liberty Hangout’s “social media content is decidedly far-Right and promotes many white nationalist talking points and ideological concepts.” The group has used social media to deny the Holocaust, and Bennett and Liberty Hangout have promoted well-known white nationalists including Augustus Sol Invictus and Chris Cantwell, who is known as the "crying Nazi." Liberty Hangout, which describes itself as a libertarian group, has also bizarrely advocated for monarchy as a system of government.

Jones previously has promoted Bennett as a way to get his Infowars message to a younger audience.