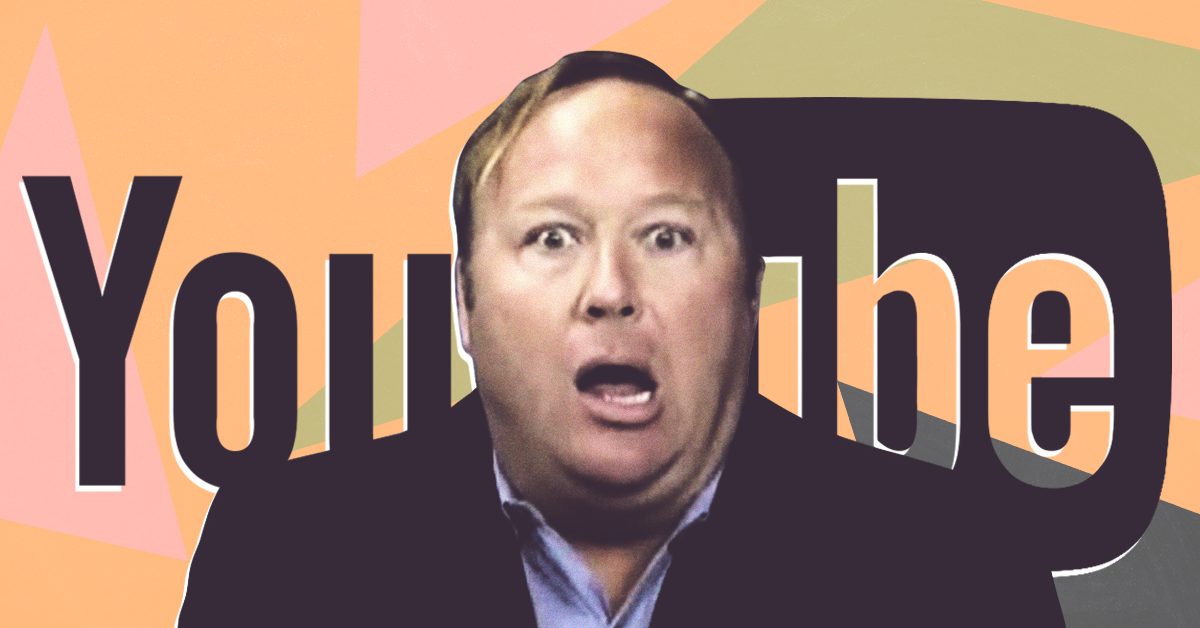 Alex Jones, whose Infowars outlet is largely banned from YouTube, is re-emerging on the platform through appearances he and his staff members are making on hugely popular YouTube shows. Many of these programs are monetized through commercials, and YouTube profits off of them because it shares ad revenue with its broadcasters.

On February 27, Jones appeared for nearly five hours on Joe Rogan’s show The Joe Rogan Experience. Rogan and Jones have known each other since the early 2000s and have appeared on each other’s shows. But earlier this year, they were involved in a dispute over comments Jones made about the Sandy Hook Elementary School mass shooting. (Jones has definitively declared the shooting a hoax multiple times but has attempted to spin those comments to rehab his image in recent years.) It is hard to say whether the dispute was genuine or just a ploy to attract attention, but they made up before the February 27 show and the episode has been viewed over 5 million times so far.

Notably, at the top of the lengthy broadcast, Rogan attacked critics who say he shouldn’t give Jones a platform before assisting Jones in spinning his past comments on Sandy Hook. The broadcast features multiple commercial breaks, meaning that Rogan’s channel -- which itself has over 4.6 million subscribers -- and YouTube are sharing advertising profits for the video.

Forbes senior contributor Dani Di Placido described Jones’ appearance on Rogan’s show as “little more than another unhinged speech from Jones, who has enough energy to feverishly rant about aliens, artificial intelligence and Hillary Clinton for almost five hours solid.” He also noted that Rogan views Jones as “the guy who always provides a wild conversation, as long as you can tolerate listening to his rapid-fire fantasies.”

Jones’ appearance on Rogan’s show appears to not be a one-off occurrence but rather a new tactic to skirt the varying bans imposed on him and his outlet by major social media platforms, including Facebook, YouTube, and Twitter.

During the podcast, Paul and his two co-hosts ostensibly sought to debate Bennett, who is known for engaging in ridiculous far-right stunts, on issues related to gun regulation and other topics. Instead, the overall effect of the interview was to normalize her brand of commentary. Paul introduced Bennett by calling her “a very controversial guest, arguably more than myself.” He and his co-hosts then bolstered Bennett’s points at times during their discussion. Show co-host Mike Majlak encouraged Bennett to disassociate herself from Jones, saying Bennett’s “very strong points” are diminished by the association. Toward the end of the video, Paul told Bennett she makes “a lot of valid points” but should consider ways she could be more effective with her message.

Throughout the appearance, Paul and his co-hosts appeared woefully unprepared to debate Bennett on specific claims. At one point, they gave her a veneer of legitimacy after she cited the widely known fact that the Transportation Security Administration (TSA) does not have a very high success rate in confiscating prohibited items during airport security checks; one of the co-hosts fact-checked her and ruled that she was correct in her claim.

Even though YouTube has banned Jones’ primary account and many of his related channels, Infowars was able to piggyback on Bennett’s appearance on the platform. YouTube still allows Infowars contributor Millie Weaver to maintain a channel, and she posted a recap of Bennett’s appearance titled “Logan Paul Gets Red Pilled,” referring to a quote from The Matrix that is now mostly used to describe someone being convinced to adopt far-right beliefs. The recap video features Infowars’ watermark and ends with Weaver giving a pitch for Infowars’ website and online supplement store.

Beyond the monetization issue, the forays by Infowars figures back into YouTube show an attempt by Jones to emulate the strategy of other fringe right-wing operations to reach an untapped younger audience. Following her appearance, Bennett appeared on a segment on The Alex Jones Show, and Jones noted that Paul reaches “tens of millions of people,” saying, “It’s kind of the college kids that the tweenies and 13-year-olds look up to.” Jones said he was “glad” Bennett went on the show because it is “important” for Infowars to reach young people. Bennett said that by appearing on the program, she gave Paul’s audience a “perspective on gun rights and the Second Amendment that they probably didn’t think they were ever going to watch. So that’s out there now.”

Jones said that he wants to appear on Paul’s show too: “I would love to invite Logan Paul on the show. I would also love to go on that broadcast because I’d like to be able to speak to my oldest daughter’s audience and tell my daughter, ‘Now, be good, and don’t vape like the other girls.’”