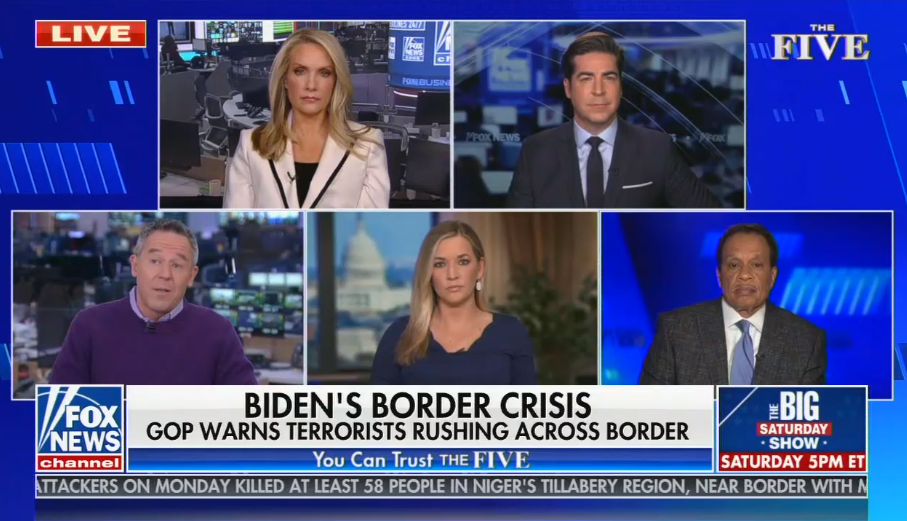 This week, Republican members of Congress went to the U.S.-Mexico border with the intent of hammering President Joe Biden on the recent increase in migrant crossings at the border, and House Minority Leader Kevin McCarthy (R-CA) suggested that suspected terrorists are trying to cross. Despite a lack of evidence, right-wing media are echoing the Republican lawmakers in fearmongering that terrorists were crossing the border, at times suggesting migrants from countries such as Yemen, Turkey, or Iran pose a threat by nature of their home countries.

McCarthy cited a conversation with Border Patrol officials, saying they are arresting “not just people from Mexico or Honduras or El Salvador. They’re now finding people from Yemen, Iran, Turkey. People on the terrorist watch list they are catching, and they’re rushing in all at once.” Democrats from border states immediately pushed back on McCarthy’s claims and claimed they had seen no evidence of Border Patrol finding suspected terrorists.

Rep. Veronica Escobar (D-TX) said she had recently met with border agents and heard nothing about terror suspects, accusing McCarthy of using the claims “to fuel the divisions” and stoke fear. Rep. Ruben Gallego (D-TX) called for McCarthy to share evidence in a classified briefing and suggested he is “either wrong or lying.”

When asked about McCarthy’s claims on Fox News, Sen. John Cornyn (R-TX) admitted that “we don't know what we don't know” and that Border Patrol told him “nothing specific.” Cornyn still attempted to inflate the danger, calling it “a potentially dangerous situation.” The chyron during Cornyn’s segment read: “Border surge under Biden sparks terror concerns.”

The day after McCarthy’s visit, Axios reported that U.S. Customs and Border Patrol told Congress that four people arrested at the southern border this fiscal year match names in the FBI's Terrorist Screening Database, but the database is known to be deeply flawed, and a person’s inclusion in the vast system does not on its own show that they are a terrorist. People were stopped at the border for the same reason during the Trump administration, and many turned out to be U.S. citizens or lawful permanent residents. Further, 41 non-U.S. citizens or residents in the database were stopped crossing the northern border during part of 2018, while just six were stopped at the southern border. Still, some in right-wing media claimed Axios’ reporting confirmed McCarthy’s original claims.

The assertion that terrorists are crossing the southern border is not new on the right, and former President Donald Trump’s administration and his right-wing allies frequently pushed the scare tactic even though it has been repeatedly debunked. Now, right-wing media are helping Republicans take advantage of an increase in migrants coming across the border to fearmonger that migrants coming from countries like Yemen, Turkey, and Iran are terrorists.