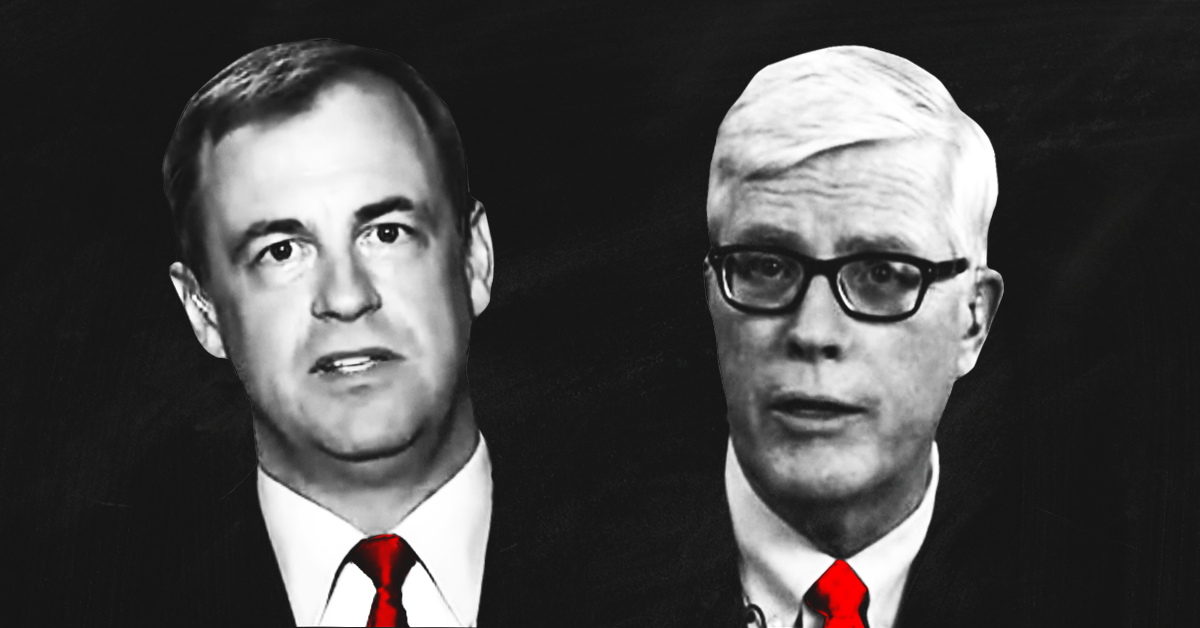 By enabling Schlichter to guest host so often, Hewitt has brought hateful trolling and far-right commentary to a radio show that, while hardly quality journalism, has earned some praise from establishment media for its supposed tone and depth.

In 2015, The Washington Post published a glowing profile of Hewitt in the leadup to a Republican presidential primary debate which he co-moderated, describing his radio show as a place where “guests can expect tough but typically fair questions that ultimately reveal not just what they think, but how they think.” It also noted that Hewitt has “a reputation for facilitating rich and respectful on-air conversations with guests” and speculated that he must host “epic” dinner parties.

Describing Hewitt as “the most influential conservative journalist in Republican presidential politics,” another 2015 profile in The Guardian called him “the thinking candidate’s Rush Limbaugh and the brain to Matt Drudge’s secretive brawn.”

In addition to hosting his radio show, Hewitt is a contributing columnist to The Washington Post and an MSNBC contributor, where he regularly joins Sunday political talk show Meet the Press. He also previously hosted his own MSNBC show which was canceled in June 2018, a month after Hewitt committed a serious breach of journalistic ethics involving then-EPA Administrator Scott Pruitt.

Schlichter is also a fiction novel author. In a March 21 article, The Bulwark’s Christian Vanderbrouk closely examined Schlichter’s “Kelly Turnbull” book series -- which is about a second American Civil War that pits liberals against conservatives -- and found disturbing similarities between material from his series and The Turner Diaries, the white nationalist novel that inspired McVeigh to attack a federal building in Oklahoma City in 1995.

As Vanderbrouk explained, Schlichter’s series incorporates a “brutal race war” into the domestic conflict, and both it and The Turner Diaries “describe a tyrannical government that takes blacks off government assistance and gives them police powers, which they use to terrorize sympathetic white characters and seize their guns.”

The parallels Vanderbrouk discovered are numerous, including similarities between the protagonists’ names (Turner and Turnbull), the use of a fertilizer bomb by the anti-government insurgents, and the fact that both books “share the same paranoia that progressive governments, aided by white collaborators, are empowering blacks to enable them to rape white women and ultimately exterminate the white race.”

Vanderbrouk also highlighted racist language in Schlichter’s novels, including a character named Do-Rag who murders white characters and a character named Skinny whose “bladder and his legs were freed from their slavery to his faraway brain when Turnbull’s rounds severed his spinal column.”

Importantly, Vanderbrouk noted that Schlichter is not promoting his novels as mere entertainment; in the foreword to one of them, he writes:

My worst fears are slowly coming true, much to my regret. The Left is using all its governmental, political, and cultural power to marginalize and repress its opponents. …

Nothing I write in People’s Republic or in this book is beyond their aspirations; in fact, my dystopian vision may well be too optimistic.

Vanderbrouk also wrote, “If you go to Schlichter’s personal Twitter account you see quite a lot of fear-mongering about political violence, white genocide, and race war,” in particular citing a tweet that promoted the white nationalist “great replacement” conspiracy theory.

Your life is significantly less important to Nancy, Chuck and the Democrats than their goal of importing a massive wave of foreigners to replace you.

Hewitt has lavished praise on Schlichter’s race war novels, saying in a blurb, “Schlichter puts a whole flight of Black Swans in the air --each of them plausible-- and the result is a riveting, page-turner, and a demand from Schlichter for...more.”

According to a review of Hewitt’s radio archive, Schlichter has guest hosted The Hugh Hewitt Show nine times this year, on January 8, February 25, February 26, February 27, February 28, March 1, March 28, April 26, and June 27. Introducing himself to Hewitt’s audience on January 8, Schlichter said he is “Hugh Hewitt’s id. I’m a little fiestier, a little more aggressive.” Although less extreme than his Twitter account or his Townhall column -- where he shares entirely different civil war fantasies that result in liberals being massacred -- Schlichter’s commentary while guest hosting Hewitt’s show has been troll-like and cruel. Some examples:

Schlichter has also used his guest hosting appearances on January 8 and February 26 to promote his race war novels.