Started in 2021, PAAU is an anti-abortion group whose founders claim that liberal ideology has led them to advocate against abortion care. According to the group’s website, abortion falls in line with systems of oppression such as sexism and economic injustice. Ahead of the annual March for Life held by abortion opponents in Washington, D.C., this weekend — which will mark 50 years since Roe v. Wade established a federal right to abortion, and the first march since Roe was overturned last June — PAAU is hosting a series of events to promote the group and anti-choice causes, including a “rescue meeting” on January 19. 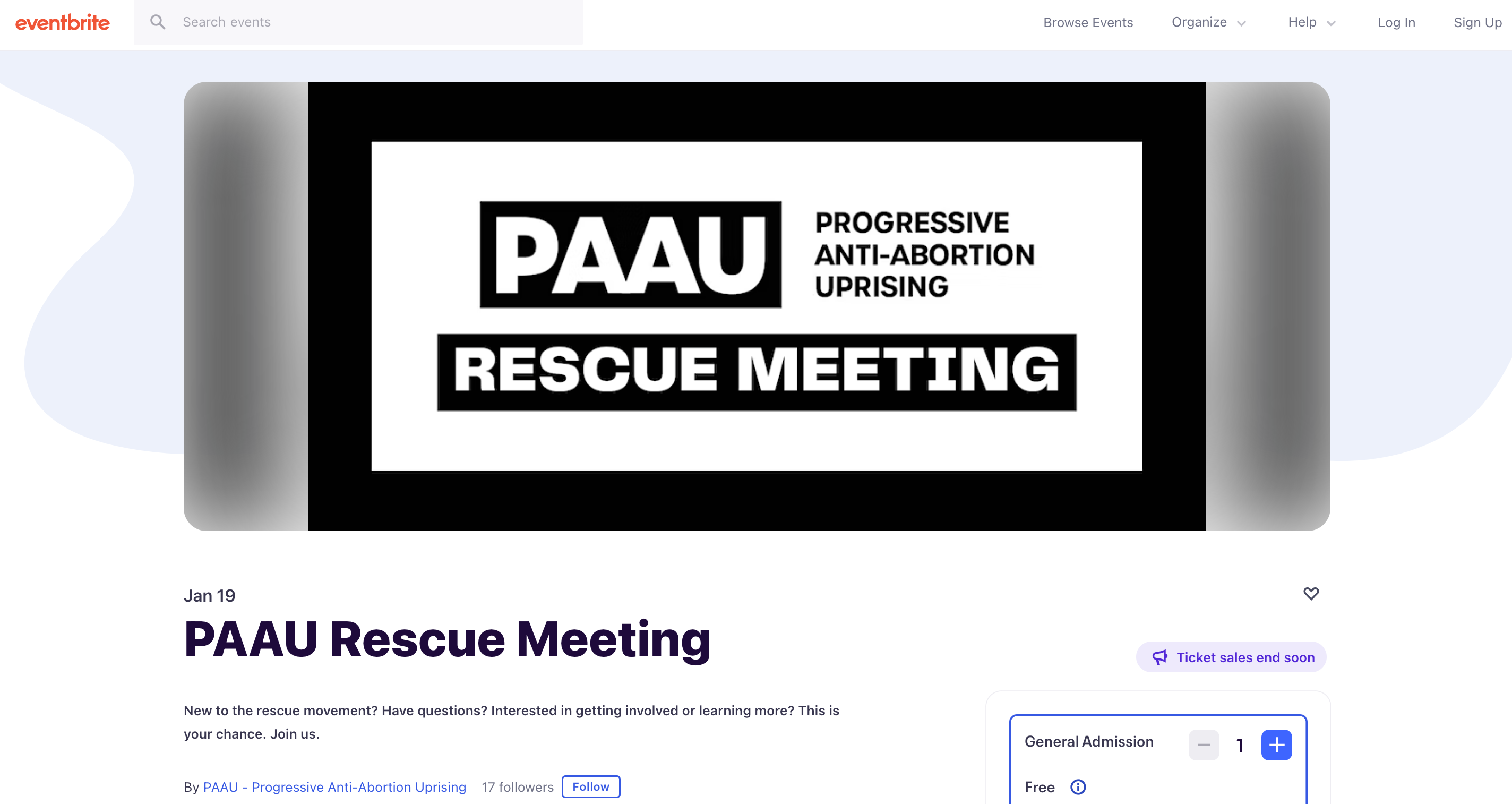 For decades, anti-abortion groups have held so-called “rescues” at abortion clinics, in which activists enter a clinic and try to dissuade patients from proceeding with their abortion appointments. At its core, the practice of clinic “rescues” aims to harass and intimidate patients from making their own health care decisions.

With anti-abortion activists flocking to the nation’s capital to protest abortion rights this weekend, PAAU is using Eventbrite to recruit those who are “interested in learning more about rescue and participating in the most direct way to non-violently prevent a child from being killed in abortion.” However, Eventbrite’s official community guidelines in part prohibit “hateful activities that incite, encourage or engage in violence, intimidation, disparagement, harassment, or threats targeting an individual or group.” A 2017 post from the official Eventbrite blog states that behaviors such as “targeted harassment … are absolutely not welcome on Eventbrite and we have and will continue to take action against groups and individuals who abuse our platform.”

Eventbrite’s community guidelines also ban events containing or endorsing “scientifically or medically unsubstantiated health advice that may have detrimental effects on attendees’ health or public safety.” PAAU advocates against abortion on the basis of medical misinformation; that includes endorsing “unproven and unethical” so-called abortion pill reversal and fearmongering about the safety and efficacy of abortion-inducing medication.

Eventbrite also prohibits the misrepresentation of an event or its contents on the platform. And while PAAU’s event pages claim to teach peaceful protest methods, PAAU members have repeatedly broken the law in their mission to stop abortions, including trespassing and trying to block abortion clinic entrances in direct violation of the 1994 Freedom of Access to Clinic Entrances Act. Lauren Handy, director of activism at PAAU, was indicted last March for leading a group including PAAU founding board member Herb Geraghty in a 2020 clinic blockade in Virginia.

During Handy’s 2022 arrest, D.C. police also found five fetuses at her home, which PAAU later claimed were part of an elaborate plot to provide funerals and bury 110 aborted fetuses, and she was previously been sentenced to jail time for obstructing the entrance to a Michigan clinic in 2019 and for trespassing at a Virginia clinic in 2021. PAAU founder Terrisa Bukovinac, Communications Director Kristin Turner, and intern Cassidy Shooltz were also each sentenced to four days in jail for the 2021 demonstration.

This isn’t the first time PAAU has used Eventbrite to promote events targeting abortion clinics. Eventbrite has previously hosted events by PAAU that claimed to “equip and empower you to organize actions outside abortion facilities, aborted fetal tissues programs and community engagement,” as well as training for “sidewalk advocacy” outside of clinics.

PAAU’s Eventbrite posts are just another example of the event platform repeatedly profiting from allowing right-wing provocateurs to violate its terms of service; some such notices have been taken down only after reporting by Media Matters. In the past, Eventbrite has hosted promotions for a white supremacist’s comedy tour, the election denial film 2000 Mules, a conference organized by QAnon supporters, and COVID-19 medical misinformation.

As access to reproductive health care dwindles across the country, it’s especially imperative for platforms like Eventbrite to hold true to their community guidelines to ensure patients and providers aren’t put at risk.