2022 marked an unprecedented assault on abortion rights, as the Supreme Court overturned Roe v. Wade in June and multiple states quickly moved to restrict or outright ban abortion and other reproductive care. While millions of Americans navigated under these new harsh abortion restrictions, the largest newsrooms in the country gave their platforms to the leading figures behind the effort to reverse Roe and demonize abortion care. 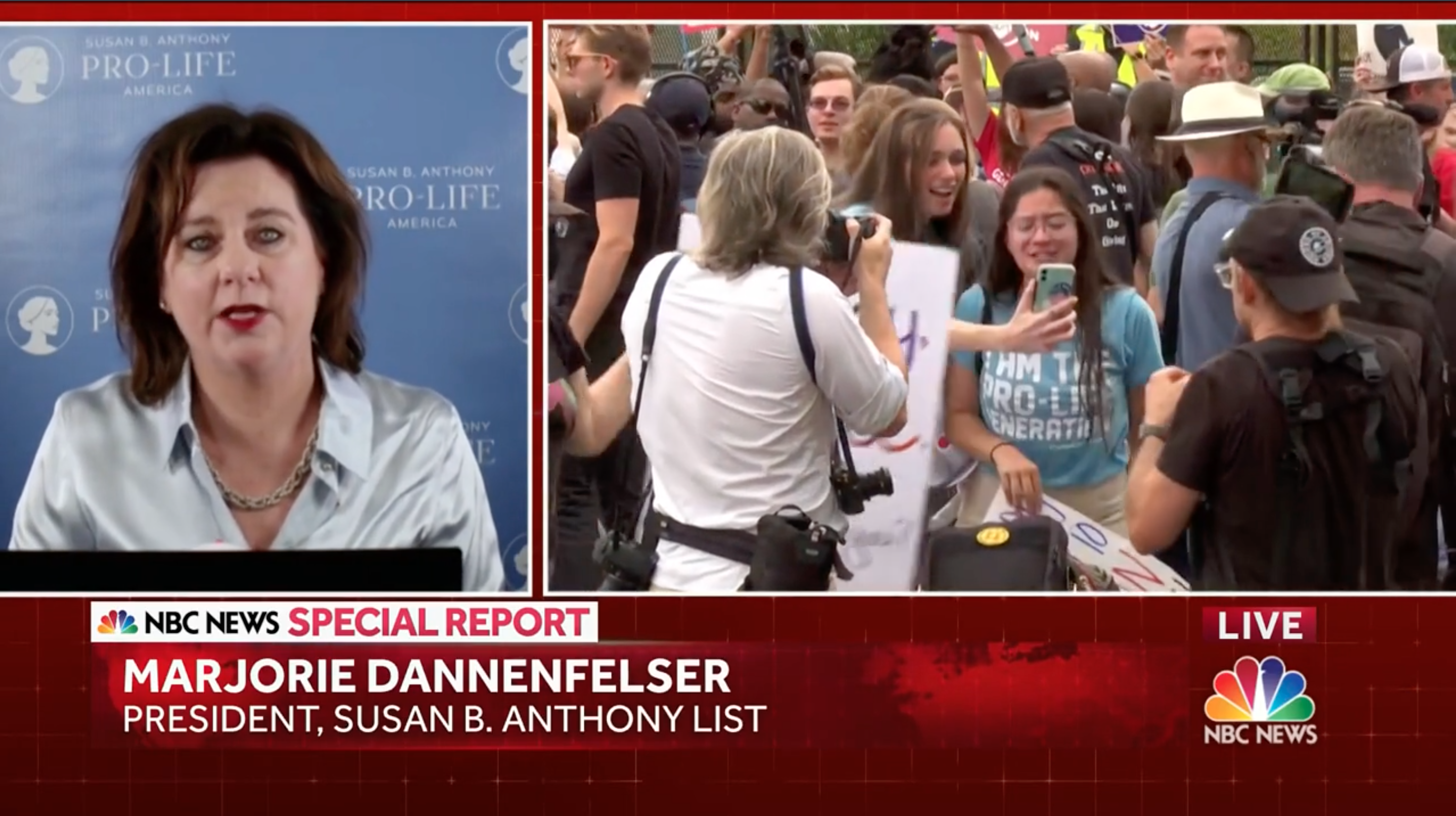 As the president of anti-abortion group Susan B. Anthony Pro-Life America, Marjorie Dannenfelser has been key in backing anti-choice political candidates and supporting the passage of legal restrictions against reproductive rights. Late last year, for example, Dannenfelser stood alongside Sen. Lindsey Graham (R-SC) when he introduced legislation to implement a 15-week national abortion ban.

Throughout 2022, mainstream news outlets welcomed Dannenfelser with open arms. In January, The Washington Post Magazine printed a Q&A in which she claimed that the anti-choice movement has “no desire to control a woman's body.” Following the leak of Justice Samuel Alito’s majority opinion on the Dobbs v. Jackson case in May, New York Magazine’s The Cut blog published a splashy profile on the anti-abortion leader as the “woman who killed Roe,” and ABC’s Sunday political talk show This Week included Dannenfelser on a guest panel.

When Roe was ultimately overturned in June, outlets flocked to Dannenfelser as an expert voice on abortion. She appeared on NBC News, CNN’s Inside Politics, MSNBC Live, and PBS NewsHour the same day the opinion came out and spoke at a live event hosted by The Washington Post three days later. Since then, major papers like The Wall Street Journal and the Post have also published anti-abortion op-eds by Dannenfelser. 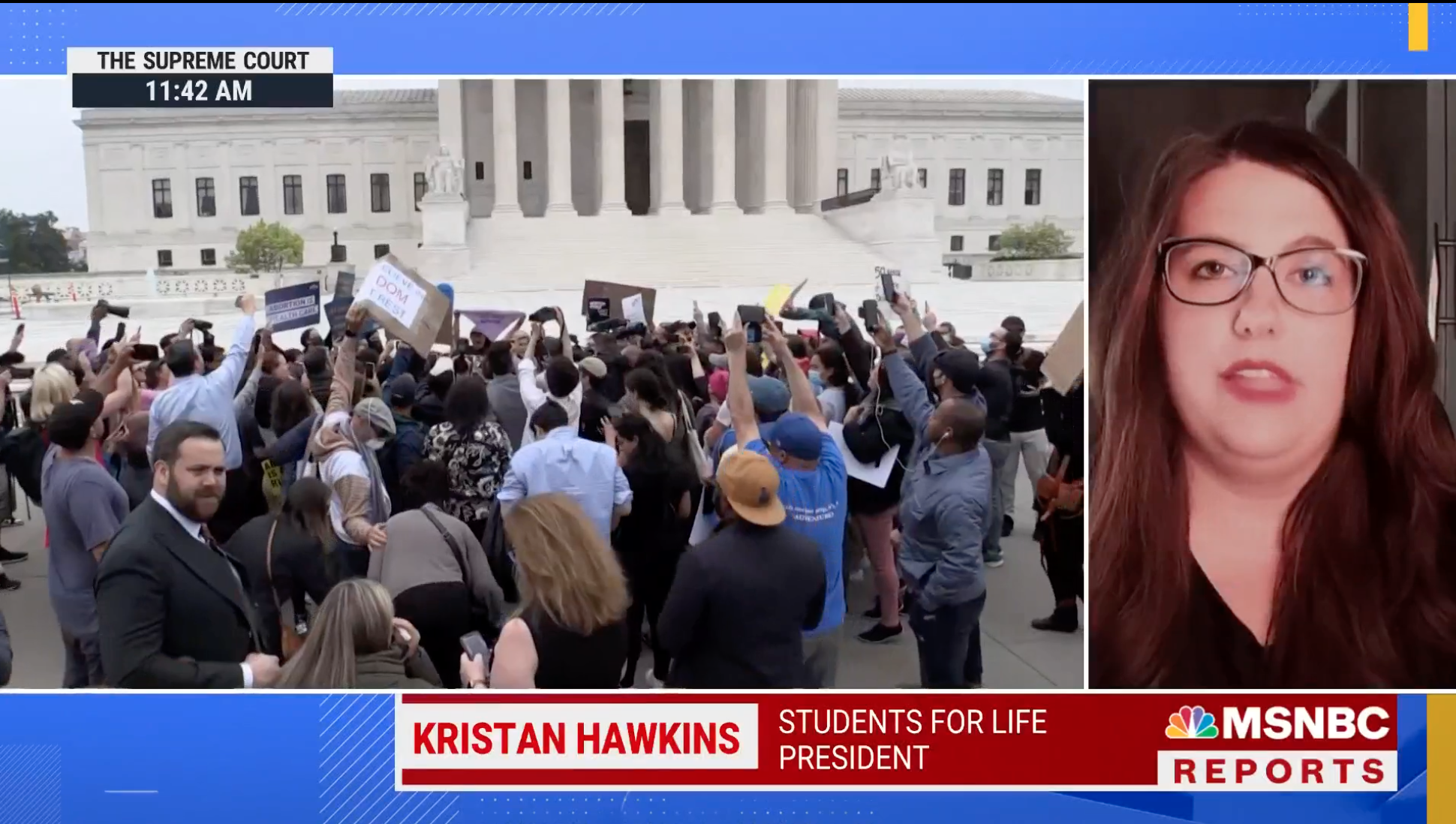 Kristan Hakwins is the president of Students for Life of America, an anti-abortion organization targeting young people in high school and college. Hawkins has expressed a number of extremist views on reproductive access, including advocating against abortion exceptions for victims of rape and incest, likening abortion to “infanticide,” and pushing for legislation that “protects life at conception.”

Hawkins repeatedly appeared in mainstream coverage of abortion news in 2022. Following the leak of the Dobbs draft opinion, MSNBC’s Andrea Mitchell interviewed Hawkins, who said Roe’s reversal “isn’t a radical decision.” After the official Dobbs decision overturned Roe, Hawkins appeared on CNN twice in the span of days, giving her a national platform to spread anti-abortion talking points, including asserting that in vitro fertilization can be murder. In July, The New York Times included her in a piece highlighting young women opposed to abortion. Hawkins defended her work by quoting conservative activist Alveda King, saying, “When young people join your movement, you know victory is on its way” — seemingly ignoring the fact that the vast majority of young people support abortion in all or most cases. 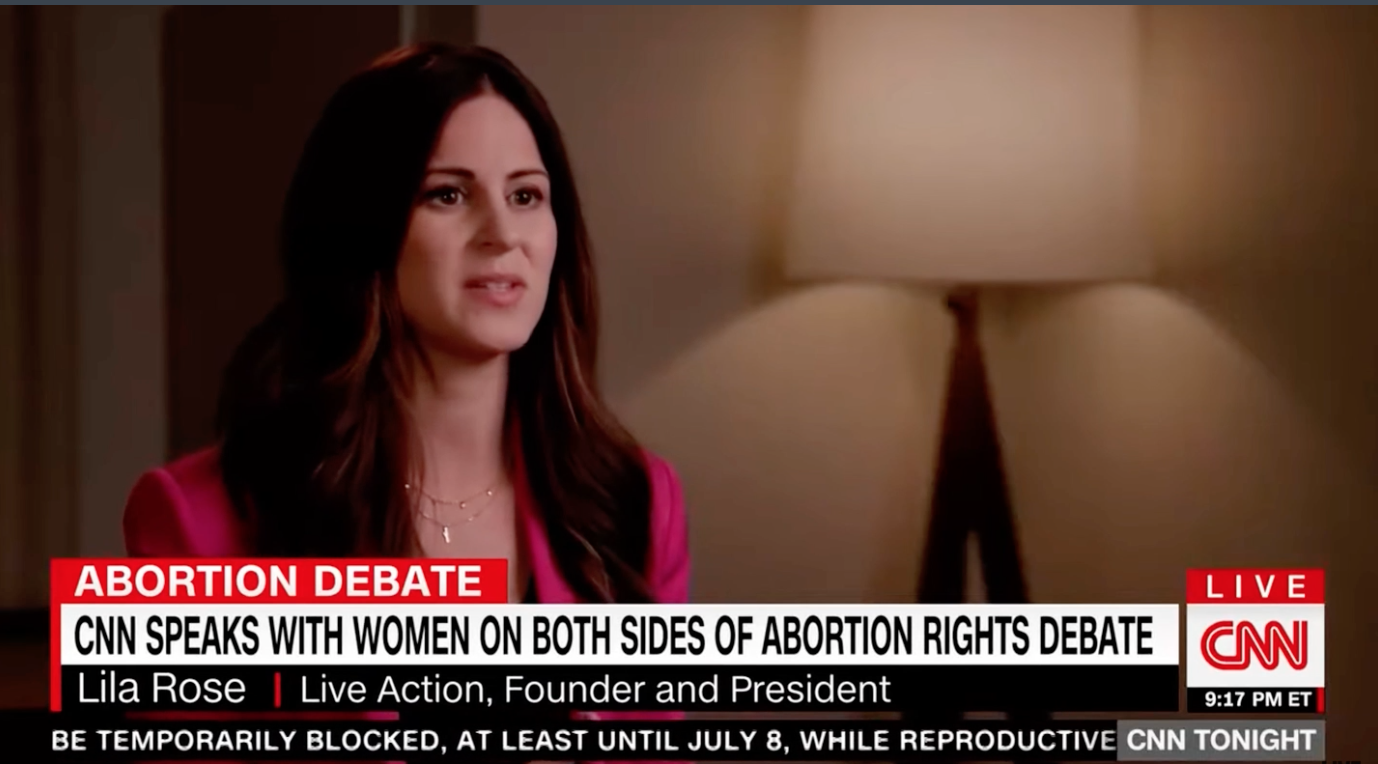 In 2003, right-wing activist Lila Rose founded the group Live Action, which purports to expose malfeasance by “the abortion industry” via sting operations. For nearly two decades, Rose has repeatedly tried to bury Planned Parenthood with undercover videos that are often deceptively edited, accusing the national abortion provider of providing sex-selective abortions, selling “baby parts,” and participating in what Live Action referred to as “Black genocide.”

Mainstream media outlets haven’t shied away from including Rose on their platforms, giving her the opportunity to promote her unfounded, bad-faith investigations. Last year alone, Rose wrote three opinion pieces for Newsweek magazine that ran before or after Roe was overturned; her op-eds paraded the success of the anti-abortion movement and fearmongered about “the long-term effects of abortion.” The Wall Street Journal similarly gave Rose the opportunity to make the “moral case against abortion” in an op-ed published last July. One piece from ABC News framed Rose as reflective of the American Christian women who “are fundamentally divided on abortion,” despite Rose’s position as a leader of the anti-abortion movement and the fact that “only 45 percent of all Christians think abortion should be illegal in most or all circumstances.” CNN and The Washington Post also showcased Rose in segments and pieces following the Dobbs decision and the preceding draft opinion leak.

Launched in 2021, Progressive Anti-Abortion Uprising claims to be made up of liberal-leaning members who oppose abortion. According to PAAU, abortion is a form of “oppression” on par with racism, misogyny, and homophobia. The group has advocated for holding “rescues” at health clinics that aim to dissuade pregnant people from proceeding with abortions.

PAAU leader Lauren Handy was recently sentenced for trespassing at a Virginia abortion clinic and is alleged to have led a group of protesters blocking access to another clinic in Washington, D.C. In March, police found five fetuses at Handy’s D.C. home, which PAAU claimed were part of an elaborate plot to provide a funeral for and bury 110 aborted fetuses.

Though PAAU had a small following before this, the group steadily gained traction in 2022 as mainstream outlets covered Handy’s story and gave the group unprecedented publicity. The Washington Post gave Handy and PAAU founder and director Terrisa Bukovinac a sit-down interview, uncritically accepting the group’s claims to be liberal and highlighting its past work. Coverage from outlets such as The New York Times and The Hill similarly heavily quoted the group’s press conference, while Rolling Stone published exclusive quotes from Bukovinac.

As part of the American Association of Pro-Life Obstetricians and Gynecologists, licensed Dr. Christina Francis has leveraged her medical credentials as an OB-GYN to oppose abortion access using pseudoscience that is out of line with medical consensus. AAPLOG claims to offer “evidence-based rationale” in its activism supporting abortion restrictions, but in reality, rhetoric used by the group – such as labeling abortion as “elective” – has been criticized by the American College of Obstetricians and Gynecologists for being “unscientific.” Additionally, the American Board of Obstetrics and Gynecology, which sets standards for and certifies for gynecologists in the U.S., has explicitly spoken out against OB-GYNS who peddle medical misinformation around abortion.

In February, The New York Times cited Francis in an article about the misleading “fetal heartbeat” used by anti-abortion legislators to justify restrictions, where she claimed that anti-choice advocates only “desire for women to be empowered with information.” A June article from The Washington Post contained an interview with Francis expressing skepticism about some OB-GYN educational programs in states with abortion restrictions paying students’ travel fees to receive medical abortion training elsewhere or providing simulation-based training, which Francis referred to as a “really extreme position.”

In July, Francis and another anti-abortion leader published an op-ed in Newsweek alleging that “a post-Roe world is much brighter for women and their children” and falsely asserted that abortion is “never necessary” for medical reasons. The New York Times returned to Francis as a source again in a September article in which she diminished concerns that abortion restrictions will worsen pregnant people’s health outcomes as “blatantly absurd.” Francis also diminished concerns about extreme health risks to pregnant people in the face of abortion bans, arguing that “Not a single state law restricting abortion prevents treating these [emergency medical] conditions,” despite the continued flagrant health problems seen in spite of them.