New analysis provides some insight into the extent to which far-right social media platforms — such as Truth Social, Gab, Parler, Gettr, and Rumble — use Google’s enormous advertising network to expand their audience. In the past 12 months, these fringe platforms have spent roughly $258,000 on ad networks including Google, likely just a fraction of their full spend and a sum that Google’s $210 billion advertising business could surely do without.

Media Matters and others have reported on Google’s history of letting far-right actors monetize extremism, such as helping the monetization of racist and dangerous anti-Muslim articles from the fake news website Freedom Daily, allowing anti-abortion centers to target women with misleading and unlabeled ads, and letting former Trump aide Steve Bannon monetize his website even as he was banned on Google-owned YouTube.

This week, Media Matters reported that a Dewey Square analysis of data from traffic analytics company Similarweb found that Google’s ad network is driving traffic and new users to fringe video-sharing platform Rumble, while also monetizing some of its traffic. Notably, Rumble had 622 million U.S. visits in the last year (from October 2021 through September 2022), and nearly 48% of U.S. display ad traffic driving users to Rumble during that time came from Google Display Network ads.

Additional analysis from Dewey found that Google is similarly generating revenue from other fringe platforms and far-right websites that are filled with extremism. In fact, Google’s ad network promotes traffic to multiple fringe platforms, monetizes visits to the platforms with ads to third-party sites including far-right websites, and then monetizes visits to those websites with ads to other sites.

Google’s ad network is responsible for some of the traffic to the fringe platforms. In the last year, more than 46% of U.S. display ad traffic driving users to these fringe platforms came from Google Display Network ads. Of this traffic, 63% went to Rumble and 20% went to Gettr, while another 11% went to Gab, and 6% went to Parler.

Dewey traced the estimated sums of money that Gettr, Parler, Gab, and Rumble spent on U.S.-based advertising over the last year and found that they spent at least $397,000 and earned at least 108 million ad impressions combined. More than 65% of this advertising spend, or over $258,000, was through ad networks, including Google.

Here is an example of display ads used to drive new traffic to the fringe platforms: 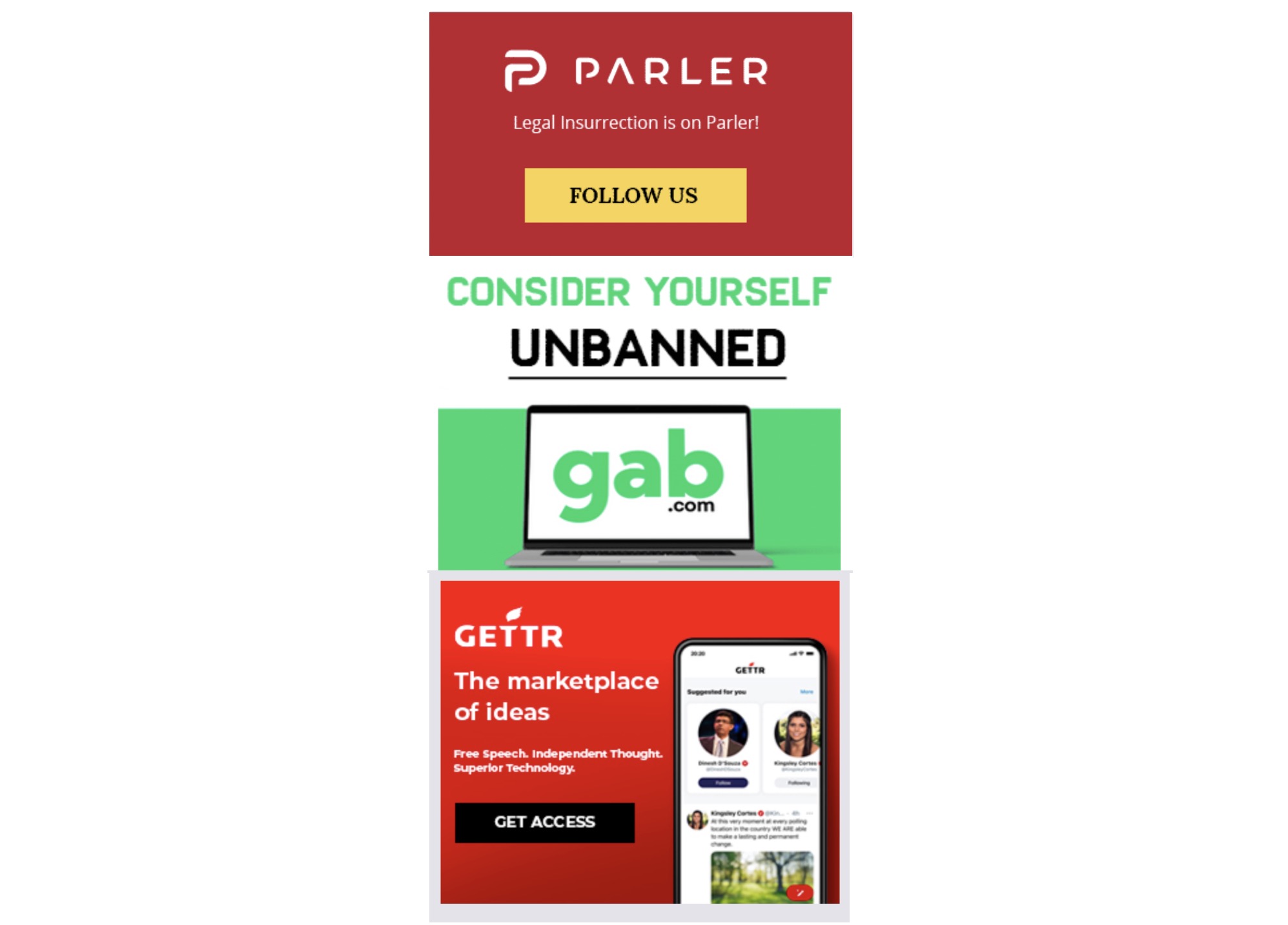 While some of the platforms do try to earn revenue by selling merchandise or offering paid account upgrades, advertising monetization is another source of income.

Dewey’s analysis found over 246,000 U.S. display ad visits monetizing the fringe platforms in the last year (from October 2021 through September 2022). Of these visits, Google Display Network made up more than 65%, with 220 advertisers using the network.

These advertisers on fringe platforms using Google Display Network include right-wing media outlets, such as Washington Examiner and The Epoch Times, and right-wing websites, such as the American Center for Law & Justice, Republican fundraising website WinRed, and the National Republican Senatorial Committee. (Notably, Dewey found that the NRSC was the largest advertiser on Rumble over this last year, spending over $577,000 on ads on the platform.) These right-wing sites also used Google’s display ad network to monetize their sites.

Additionally, these large companies are advertising on fringe platforms through Google’s ad network:

Google is providing a valuable source of revenue to these still relatively small and fringe far-right social media platforms that are allowing the spread of harmful content and extremism. They need Google far more than Google needs them.