Google advertising network AdSense is helping monetize racist and dangerous anti-Muslim articles from the fake news website Freedom Daily, despite clear violations of AdSense’s policies prohibiting content that "[t]hreatens or advocates for harm on oneself or others" or “incites hatred against” an individual or group on the basis of race or religion.

Racist content is part of Freedom Daily’s DNA. Between September 15 and October 15, the site published over 100 articles about the recent NFL player protests in support of civil rights, many of which denigrated black players because they are black and falsely claimed that the protests led to anti-white attacks. And Freedom Daily’s posts about NFL players are just part of its targeted racist content, which includes articles promoting violence and hatred against Muslims.

In recent testimony in front of the House Intelligence Committee, Google’s senior vice president and general counsel claimed that the company has “taken steps” to demonetize misrepresentative websites and has added to its policies “around or against hate speech.” According to Google AdSense’s policies, “We don’t permit monetization of dangerous or derogatory content”:

We believe strongly in freedom of expression, but we don't permit monetization of dangerous or derogatory content. For this reason, Google ads may not be placed on pages containing content that:

But Google AdSense is still profiting off of multiple fake news sites, including Freedom Daily and its related site mPolitical (mPolitical features the same posts and bylines as Freedom Daily, and the two sites share a Google ad code), by providing advertising to them in a clear contradiction of its policies (which also prohibit “misrepresentative content”). Here are 10 posts from Freedom Daily swarmed by ads from AdSense that Google might want to take a look at:

Note: The blue arrow in the corner of an ad indicates that it was placed by AdSense.

“Desperate Tennessee residents are frantically crying out for help, as the small town they once loved and cherished is being completely overrun by hordes of nasty Muslim migrants.”

A 2017 Freedom Daily story published at least twice claimed “nasty Muslim migrants” from Somalia were taking over a Tennessee town and targeting Christians. Snopes looked at the July 25 version and rated it false, stating, “Based on the evidence we were able to amass, Shelbyville, Tennessee doesn’t have a Somali refugee problem; Freedom Daily, on the other hand, does” (emphasis original):

As many Americans were left in shock and horror following the Minnesota woman being violently shot down by a Somali Muslim cop, now Somali migrants have set their sights on another American city to invade. Desperate Tennessee residents are frantically crying out for help, as the small town they once loved and cherished is being completely overrun by hordes of nasty Muslim migrants, who have now started targeting local Christians with violent Islamic crimes.

Somali Muslims are proving to be the most violent migrants due to the vicious jihadist-ruled country they’re plucked from before making their way to the United States. Somali Muslims are not only overtaking Shelbyville and forcing Sharia onto the populace, but the city of Minneapolis as well. In addition to the disturbing headlines of the Somali cop gunning down a white woman last week, Somali migrants completely took over a small Minnesota white neighborhood several months back and started threatening to rape and murder females who were standing in their yards. [Freedom Daily, 7/25/17,  11/1/17; Snopes, 7/31/17]

For the past 8 years, Michelle Obama strutted around like a queen, doing very little work as the First Lady other than running her big fat anti-American mouth. While we’re thankful this piece of work has finally left our White House after making a mockery of our country, what Michelle was caught doing inside a ancient church on Tuesday proves once again just how classless this woman is, who obviously holds herself above all the rules, even in the places of worship that most people revere as the sacred and holy place of God.

“OF COURSE….Muslim Machete Attacker Was Here On Green Card From Africa”

“ISLAM Needs to Be ERADICATED From the Earth.”

Freedom Daily published a post about an ISIS propaganda video headlined “What This Muslim Father Did to His Son Proves ISLAM Needs to Be ERADICATED From the Earth.” [Freedom Daily, 2/24/16]

A July piece described a settlement given to the family of  Michael Brown --  a black teenager who was fatally shot by a white police officer in 2014 while unarmed -- as a win of “the ghetto lottery.” The post went on to attack Brown’s family for having the “audacity” to argue that “the death of the two-bit thug” would deprive the family of potential wages. From the July 2 article:

Take note America, In today’s America if you are a minority and raise a two-bit thug who gets himself killed for intimidating people and attacking a police officer the government will reward you with so much money that you will be able to fly around to exotic locations on your very own private jet. This is what Obama must have meant by the slogan “Hope and Change.”

Although their son didn’t even live with them, they actually had the audacity to argue that the death of the two-bit thug that they raised deprived them of financial support through his future potential wages. Umm, you won’t make 1.5 million dollars working at McDonald’s, if he was even qualified to work there.

This is Obama’s America. This is what we, as a nation, got for electing a race baiting charlatan with a name like Barack Hussein Obama. We are in serious trouble when you raise a kid to be a two-bit thug and the government, out of fear of looting and riots, takes it upon its self to reward you with a 1.5 million dollar payday because society had to fix the problem you raised. [Freedom Daily, 7/2/17; The Associated Press, 6/23/17]

Man “driving a van [that] plowed through a group of Muslims” gave them a “taste of their own medicine.”

A June piece said that “political correctness and liberal politicians are providing to be Islam’s final advocate,” while “one resident finally snapped” and attacked Muslims outside a mosque:

Authorities have done little to prevent terror attacks from plaguing Europe. Muslim refugees continue to flood places like the U.K. and Germany, while citizens continue to be brutally victimized with terror attacks, as political correctness and liberal politicians are proving to be Islam’s biggest advocate. As the U.K. continues to be targeted in recent months, one resident finally snapped and decided to give Muslims a brutal taste of their own medicine after what he did to a group of Muslims who had gathered for prayers outside their mosque a little after midnight last night. [Freedom Daily, 6/19/17]

“Americans aren’t the ones who should run and hide and live like victims, it’s Muslims who need to be afraid. They don’t run this show anymore.”

An October piece cheered a Louisiana sheriff-turned-lawmaker for “sending a message that … Muslims who need to be afraid”:

Finally, someone has come out and given an assertive directive Americans have been desperate to hear for eight years. With a new sheriff in town, this former sheriff is empowered to give blunt advice like this rather than apologies. While it may seem like an impossibility to cleans the country of Islam, it’s a lot more feasible than loving terrorist out of committing acts of terror. More importantly, it’s sending a message that Americans aren’t the ones who should run and hide and live like victims, it’s Muslims who need to be afraid. They don’t run this show anymore. [Freedom Daily, 10/15/17] 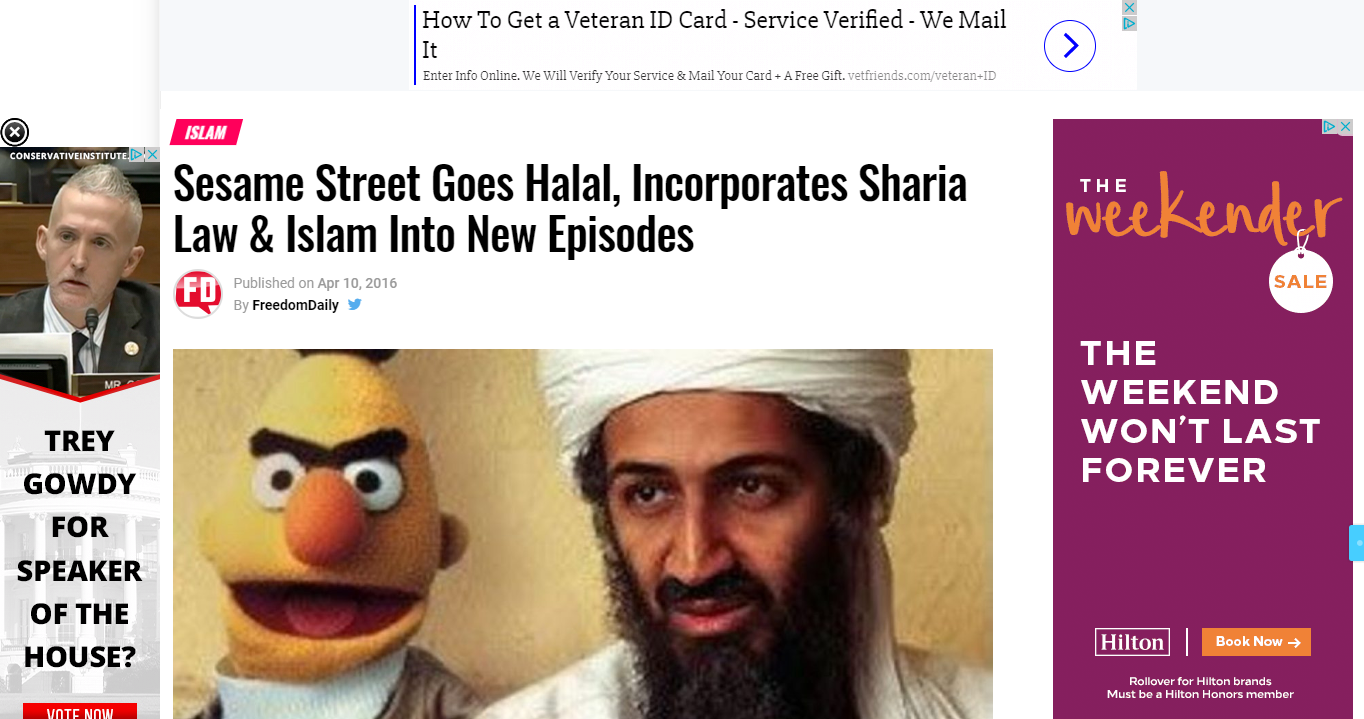 An April 2016 piece criticized the TV show Sesame Street for “having a Muslim woman teach young girls about female empowerment”:

Instead of sticking with basic education like numbers, the alphabet, and the occasional sing-along about treating others with kindness, the adored children’s program is kicking off their near 50-year run with perhaps the most threatening indoctrination yet. One-upping controversial episodes on topics including HIV, death, and Katy Perry’s barely-there wardrobe, the puppet-laden television show just gave our children a heaping spoonful of Islamic propaganda.

Having a Muslim woman teach young girls about female empowerment is like having a slave teach a free people about emancipation. How can one who is still chained speak of freedom? There is no personal experience to backup their claims. Even more so, they are the definition of a bound servant who believes they are free. [Freedom Daily, 4/10/16]