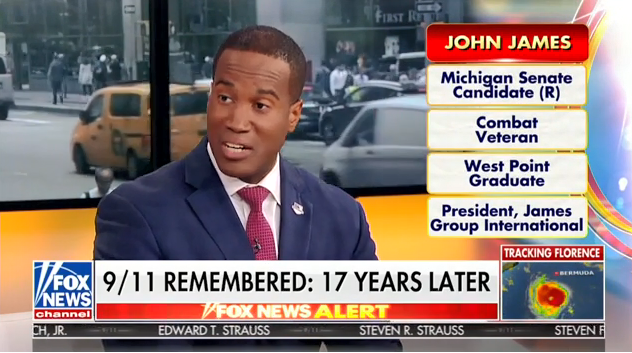 Fox News gave Michigan Republican Senate nominee John James an hour-long guest hosting gig on the September 11 edition of its program Outnumbered. James, who is running against Sen. Debbie Stabenow, used that time to speak repeatedly about Michigan and the need to vote out incumbents. He is now promoting his Fox News appearances and related tweets by the network to bolster his campaign.

Outnumbered typically features five hosts -- four of whom are women and the fifth is the show’s “#OneLuckyGuy.” During James’ stint as the sole man on the panel, the candidate argued that “people in the state of Michigan are sick and tired of the incumbents” and that “we have so many people in Washington trying to legislate and regulate futures that they’re not going to be a part of.” As he spoke, the bottom third of the screen read “Control of Congress at stake as a sprint to the November elections begins,” and when James concluded, one of the other hosts endorsed his statements, saying, “I’m not going to argue with that.”

James is now using that Outnumbered appearance, as well as one on Fox & Friends earlier this morning, to advertise his campaign online. He has retweeted Fox News’ tweets about his appearances, including one that quotes his claim that “people in the state of Michigan are sick and tired of the incumbents.” He also shared multiple pictures and quotes from his appearance on Outnumbered along with a link to his official campaign website, and retweeted two of the show’s hosts Lisa Boothe and Harris Faulkner.

It is not at all improper, or even unusual, for candidates for office to make television appearances. But gifting a politician with a full hour to push talking points that are then repeatedly praised by network employees is entirely different, if not unheard of, for Fox. Outnumbered has a history of offering Republican political figures such airtime to push their political agendas, although the guest hosting gig has usually gone to incumbent members of Congress in the past. The network’s decision to allow a current candidate to host the show is even more ridiculous and further demonstrates that Fox News acts as little more than a media wing of the Republican Party.