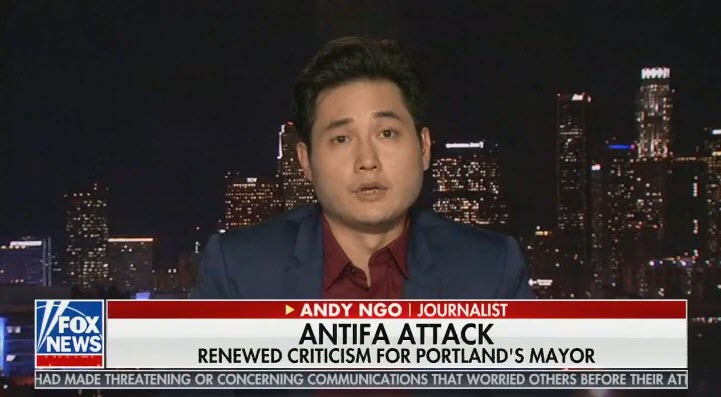 Far-right writer Andy Ngo has been presented as a credible authority on left-wing violence following an attack on him at a rally in late June. Now it’s been revealed that Ngo has secretly been working alongside a violent far-right group to cherry-pick and misrepresent left-wing activism in an attempt to downplay right-wing violence.

On August 26, the Portland Mercury reported that Ngo was present during conversations in which far-right protesters planned violent attacks against left-wing activists; even though he calls himself a journalist, Ngo never reported on these conversations.

This story is particularly relevant because of how the media has treated Ngo. On June 29, members of antifa attacked Ngo at a Portland, OR, rally held by the Proud Boys, a far-right violent gang. (Antifa comprises anti-fascist activists who “believe the best way to deal with the rise of white supremacy and hate groups in the Trump era is by confronting them on the street.”) The attack on Ngo predictably led to widespread condemnation of anti-fascists and left-wing violence from right-wing media outlets like Fox News and more mainstream media figures. Ngo emerged as an authority figure on attacks by anti-fascists.

Prior to the June attack, Ngo had just two appearances on Fox News in 2019, both on the network's prime-time opinion shows Tucker Carlson Tonight and The Ingraham Angle. But the June 29 events transformed him into a regular. Since then, he has appeared on Fox News at least 12 times, making appearances on “news”-side programs such as The Story with Martha MacCallum, Fox & Friends First, and Fox News @ Night with Shannon Bream. He also appeared on the July 2 edition of CNN’s New Day to discuss his version of the attack and to condemn violence from the left. Many mainstream media outlets simply identified Ngo as an “independent journalist” or a “conservative journalist,” lending legitimacy to his narrative while ignoring his long record of credibility issues.

The August 26 report described an undercover activist dubbed “Ben,” who has been keeping his real identity a secret while posing as a right-wing protester with Patriot Prayer, a right-wing group with a history of violence. In the summer of 2018, some of its members were discovered with a cache of firearms on a rooftop in Portland.

In addition to reporting on Patriot Prayer’s violence, Ben discussed Ngo’s involvement with the group during demonstrations and his role in cherry-picking footage to avoid filming any violence from right-wing protesters. According to Ben, “Ngo doesn’t film Patriot Prayer protesters discussing strategies or motives. He only turns his camera on when members of antifa enter the scene.” He added, “There’s an understanding that Patriot Prayer protects him and he protects them.”

The Portland Mercury described a video Ben recorded shortly before Patriot Prayer members attacked left-wing activists at a local bar on May 1:

As the group waits, they discuss their weaponry. A few men try to guess which way the wind's blowing to avoid getting "spray" in their eyes, presumably when they use it against members of antifa. Another man holds a thick wooden dowel, and practices swinging it like a baseball bat. A woman carries a red brick in her hand. Some don goggles, helmets, and tactical gloves.

Ben captures someone telling a person on speakerphone, "There's going to be a huge fight," and gives them directions to Cider Riot.

Ngo doesn’t film any of the conversations, and smiles when the group cracks jokes.

“He overheard everything,” Ben recalls, “and said nothing.”

Ngo has a history of distorting events that occur at rallies in Portland, a city that has become a hub of far-right violence in recent years. During an August 19 far-right rally, Ngo tweeted a slew of videos that were later debunked as misleading or blatantly untrue. His reporting often painted left-wing groups as violent organizations that pose a threat equal to that of right-wing and white supremacist groups, even though experts say that the two are nowhere near comparable.

Ngo heavily leaned into the narrative that anti-fascists are a violent left-wing group, even labeling the activists "domestic terrorists.” The narrative soon reached Republican politicians: Sen. Ted Cruz (R-TX) called for an investigation into Ngo’s attack, and House Minority Leader Kevin McCarthy (R-CA) condemned “the hate and violence perpetrated by Antifa.” Cruz has since introduced legislation in Congress that seeks to label antifa as a domestic terrorist organization, citing the attack on Ngo as the basis for the legislation, and President Donald Trump has voiced his support. (Neo-Nazis and the Ku Klux Klan have not been designated domestic terror groups.)

The revelation of his ties to violent far-right activists is a stark reminder that bad-faith actors -- or right-wing grifters -- often seek to manipulate the media to advance their own narrative; no matter how sympathetic such figures should appear, legitimate outlets should maintain a healthy degree of skepticism.