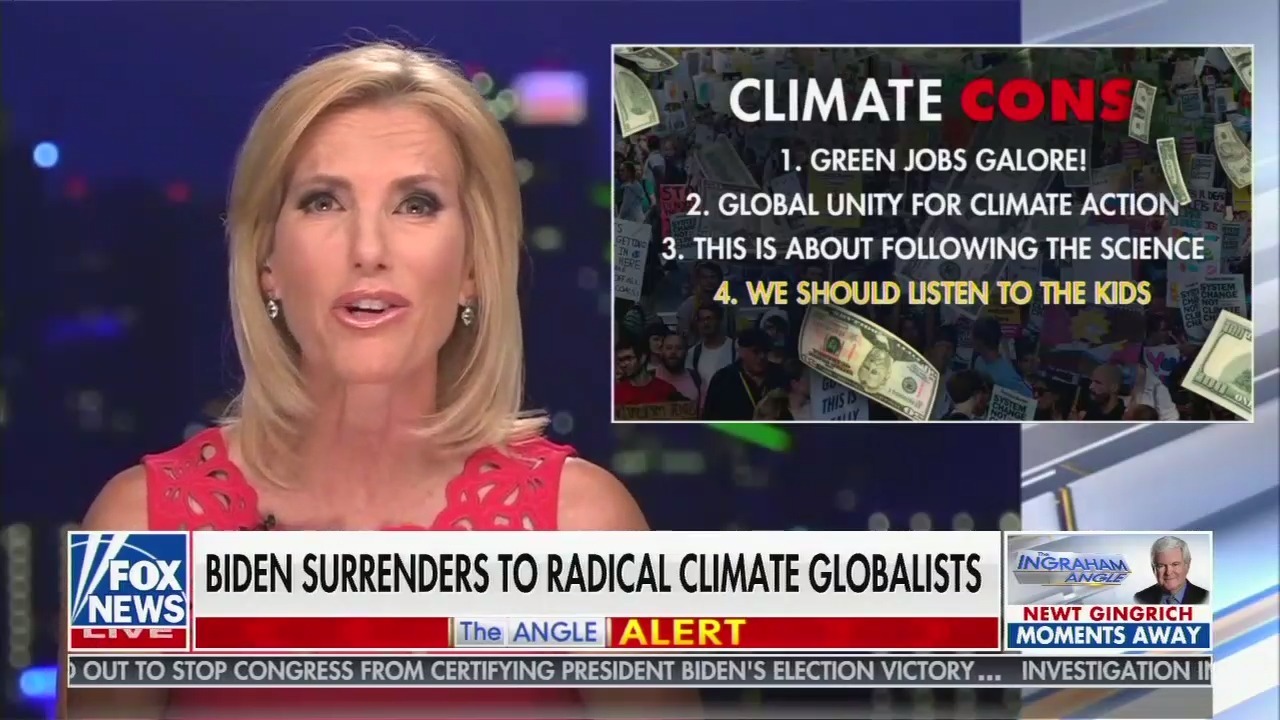 It’s that time of year when for one day, network TV news outlets commemorate the birth of the modern environmental movement by airing climate and environment focused programming.

On and around April 22, designated as Earth Day, cable and broadcast news programs leveraged the day and the many related events -- including Biden’s two-day Climate Leadership Summit -- to articulate the scope and scale of the climate crisis, showcase solutions to this mounting global threat and feature some of the movement’s most prominent thought leaders, scientists, and activists.

But not Fox News.

Fox used this moment to, what can best be described in Fox terms, wage an all-out war on Earth Day.

Fox attacks any effort to act on the climate crisis

Coverage across Fox programming on and around Earth Day was rife with climate deniers pushing climate misformation and bad-faith arguments against efforts to decarbonize our economy and work collectively with world leaders to address the global climate crisis. The vast majority of coverage specifically focused on Biden’s summit -- which involved 40 world leaders and aimed at discussing stronger climate action -- was centered not on the need for climate action or good-faith critiques about how to achieve Biden’s ambitious goal to reduce U.S. carbon emissions by 50% by 2030. Instead, it focused on the well-worn myths that climate action will hurt the U.S. economy and its workers.

Representative of the false narrative that climate action will destroy our economy was Fox host Larry Kudlow’s comments on the April 22 edition of America’s Newsroom:

Kudlow, who formerly served as economic adviser to then-President Donald Trump, is a long-time climate denier who has often been Fox’s go-to commentator on policies related to climate change. His stock (bogus) response is climate action is bad for the economy.

In fact, Biden’s American Jobs Plan, which is at the core of his strategy to transition to a decarbonized economy, is lauded by labor leaders and economists who predict it will create 2.3 million jobs by 2024, injecting $5.7 trillion into the economy and raising per capita income by $2,400. Alternatively, not acting on climate change will devastate our economy and way of life.

Fox’s prime-time stars also used Earth Day as an opportunity to advance their own personal wars.

Tucker Carlson mocks the relationship between race and climate change

On the eve of Earth Day, Tucker Carslon on his prime-time show attacked and mocked comments made by Rep. Alexandria Ocasio-Cortez (D-NY) linking climate change and racism. Carlson and ultra-conservative political commentator Mark Steyn claimed it’s ridiculous to correlate climate change and racism -- even though experts say the two are “inexorably” linked. In fact, the bit between Carlson and Steyn never attempted to explore the wealth of information on the clear interconnectivity between these two issues; instead, the two made it a punchline in a joke tailored for Carlson’s burgeoning right-wing extremist fans.

The segment comes just weeks after Carlson used his nightly monologue to unfurl a racist rant targeted at the environmental justice elements of Biden’s infrastructure plan. What Carlson is attempting to push back on is not just the growing public understanding that racial justice, economic equity, and climate change are interwoven, but the political manifestation of those ideas in policy proposals like the Green New Deal and Biden’s infrastructure plan.

On the April 22 edition of his program, host Sean Hannity leaned into one of Fox’s oldest chestnuts -- climate advocates who use private jets to travel are hypocrites -- and targeted one of the network’s favorite climate villains, John Kerry. In the segment, Fox News correspondent Trace Gallagher detailed the travel habits and calculated the carbon output of both Kerry and billionaire Michael Bloomberg’s private jet use.

The segment calls back to a scandal Fox manufactured in February around Kerry’s private jet travel and falls in line with the network’s history of using private jet travel to pivot any discussion on the climate crisis to the “hypocrisy” of “elites” and “liberals” who advocate climate solutions. While attempting to falsely portray politicians and wealthy celebrities as the face of the climate movement, the attack ignores the millions of people around the world harmed by climate change and environmental injustice.

To be clear, use of private jets by those advocating for climate action should be critiqued. But whether or not using private transportation is hypocrisy by climate advocates is not the point. In reality, individual action is wholly inadequate for addressing the scale of the climate crisis when 100 companies are responsible for 71% of global emissions. The crisis requires, above all, systemic policy responses that can be implemented only by governments.

On the April 22 edition of The Ingraham Angle, host Laura Ingraham focused her monologue on “the big climate con.” Ingraham’s “con” list included misleading arguments against the benefits of climate action like job creation; attempts to discredit the role of -- and the need for -- global cooperation in dealing with the crisis; and false claims that the scientific warnings on climate are not sound or well understood. Her final point was targeted at young activists who are calling for urgent and bold action -- and she took specific aim at Greta Thunberg and a Mexican climate justice activist named Xiye Bastida.

Ingraham suggested that today’s youths are being “indoctrinated into critical climate theory just like critical race theory.” Not to be outdone by Carlson, Ingraham introduced the clip of Bastida talking about the role of justice in developing climate solutions like this: “What happens when you mix open-borders madness, critical race theory, and climate paranoia all together in one big bowl? You get this.”

Ingraham’s callous attacks on climate and youth activists are not new. She received significant blowback in 2019 for comments she made about Thunberg and in 2018 for mocking Parkland shooting survivor David Hogg.

The biggest problem with Fox’s “War on Earth Day'' is that it is not limited to once a year. Daily Fox assaults erode public acceptance of climate science and the need for urgent and bold action on climate change. Far from being a news outlet, the outlet is a key cog in the right-wing disinformation machine and climate obstruction is one of its main goals.