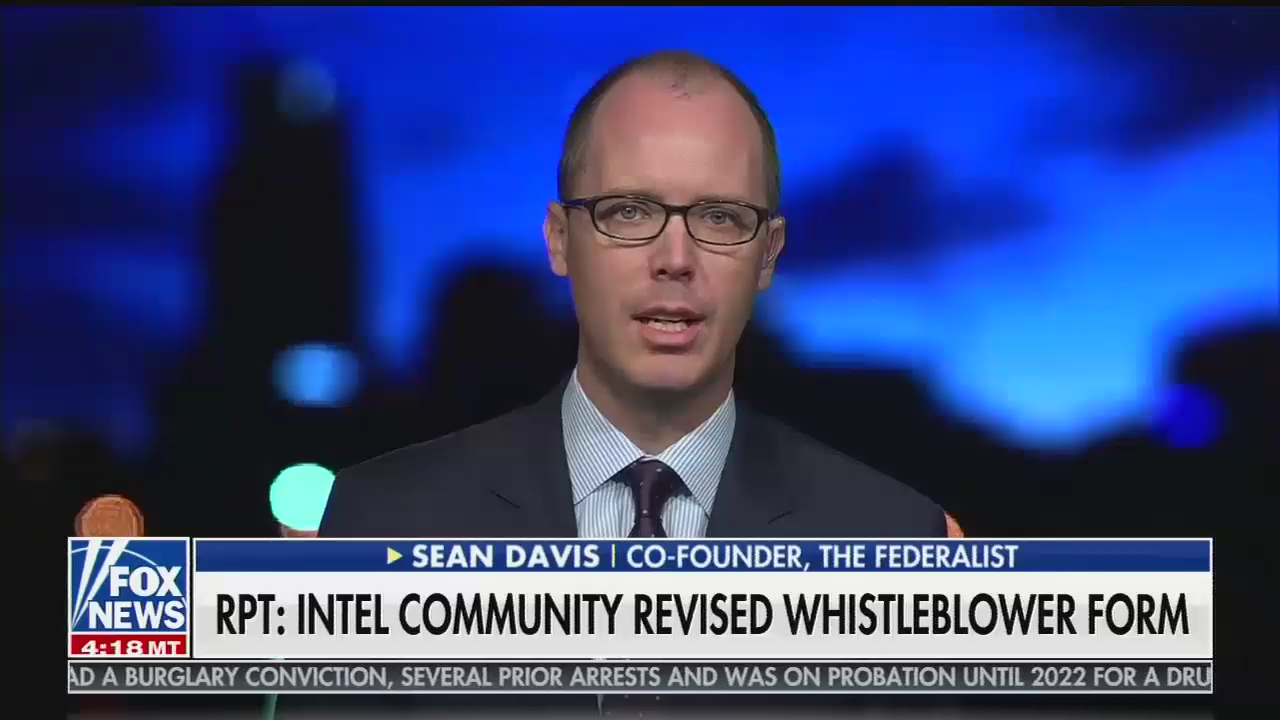 A debunked conspiracy theory surrounding the whistleblower complaint regarding Ukraine, pushed over the weekend by The Federalist and promoted by President Donald Trump, is continuing to make the rounds on Fox News. The debunked claim has been pushed on Fox News at least five times since September 27.

On September 27, The Federalist's Sean Davis falsely claimed that until recently, intelligence community whistleblowers were required to have “first-hand knowledge” of wrongdoing in order to have a complaint investigated. This claim, which has since been debunked as untrue, is based on an obscure government form that conservatives are claiming was recently changed when Intelligence Community Inspector General Michael Atkinson reversed policy to allow secondhand information as the basis of a complaint. In fact, the statute that governs the process for intelligence community members to file whistleblower complaints has never included a firsthand knowledge requirement. The conspiracy theory was promoted by the president, Republican members of Congress, and a slew of right-wing media personalities. On Monday, Fox News continued to push the claim as a primary talking point.

On the September 27 edition of Hannity, Trump attorney Jay Sekulow claimed that “the form that so-called whistleblowers fill out” used to require firsthand information and “that was on the form literally until apparently very recently.”

The first explicit mention of Davis’ report on Fox News came later that night, during the September 27 edition of Fox News @ Night with Shannon Bream. Bream asserted that the form “used to require that you had firsthand knowledge of the allegations you were making,” adding that “at some point, that form was changed.” Her guest Rep. Chip Roy (R-TX) agreed that “this is an important question” and that Davis “raises a red flag.”

On Fox & Friends Sunday, Fox News correspondent Garrett Tenney reported that “a new report from The Federalist claims that as recently as last month, the intelligence community secretly revised its whistleblower complaint form to eliminate a requirement of firsthand knowledge of wrongdoing, which, if true, is significant given that much of the whistleblower's information was secondhand.”

On Sunday Morning Futures, anchor Maria Bartiromo ran a segment in which she and guest Rep. Doug Collins (R-GA) promoted the false claim that the “rules” for intelligence community whistleblowers have been changed concerning allegations based on firsthand or secondhand knowledge.

On September 30, Fox & Friends hosted Davis to discuss his report, and he falsely asserted that “until recently, the ICIG said you need to have direct, firsthand evidence. And as we know with this particular anti-Trump complainant, there was no firsthand evidence, and much of the secondhand or thirdhand evidence this person offered was simply false.” Davis and co-host Steve Doocy also floated the unfounded claim that “there could have been coordination between Adam Schiff and the intel community” in authoring the complaint.

Later in the show, the co-hosts discussed Atkinson’s upcoming testimony, with Doocy claiming that “Republicans are going to be asking questions like, ‘Hey, when exactly did you change it from you had to have firsthand knowledge to you could have heard somebody talking about it?’” Co-host Ainsley Earhardt asserted that “it used to be they wouldn’t investigate -- you weren’t considered a whistleblower if you got secondhand information. You had to hear it directly, but in this case, they changed the law and that’s why this whistleblower” gave secondhand information.