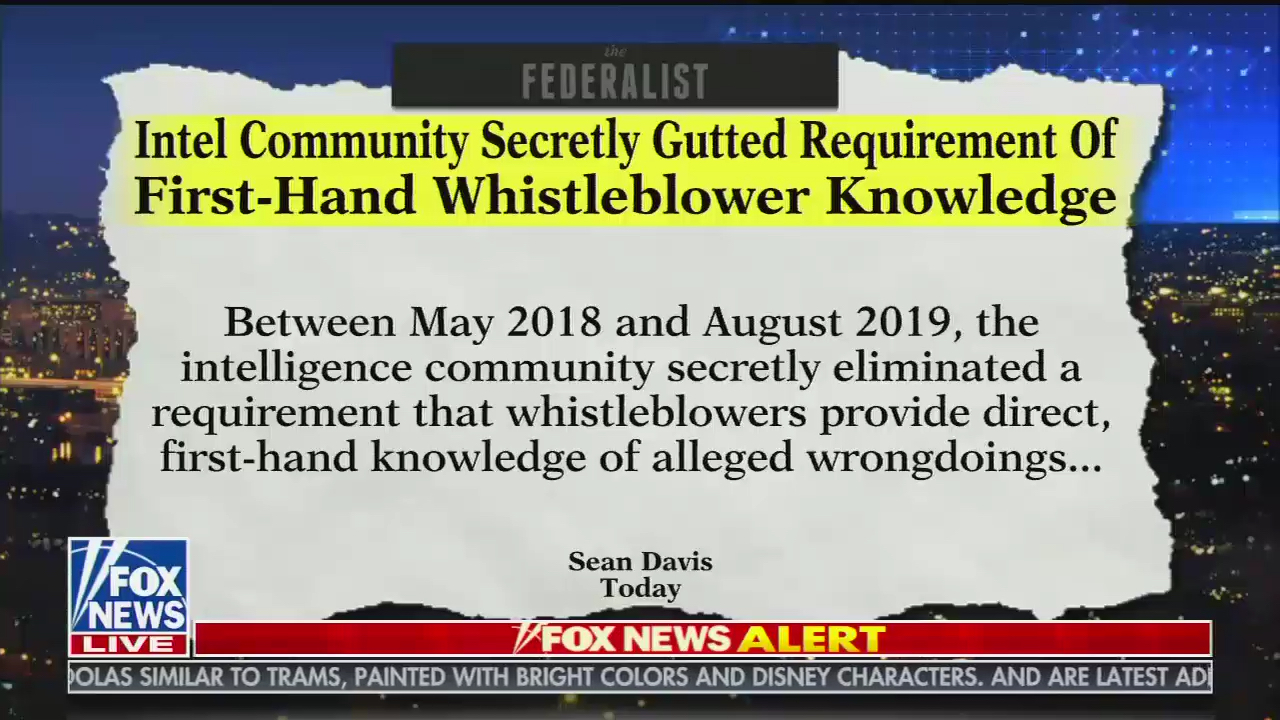 A conspiratorial article in The Federalist falsely claiming that until recently, intelligence community whistleblowers were required to have “firsthand knowledge” of wrongdoing to file a complaint is being used by other conservative media outlets, Republican members of Congress, and the president himself in desperate attempts to discredit a whistleblower complaint that is at the heart of an impeachment inquiry into President Donald Trump.

Trump is currently facing an impeachment inquiry in the U.S. House of Representatives following the revelation that he pressured the president of Ukraine to investigate Joe Biden. The allegations against Trump stem from an anonymous whistleblower complaint submitted by a member of the intelligence community. The Trump administration attempted to prevent Congress from accessing the complaint, even though the law required it, but then relented and released the damning report.

Trump defenders in conservative media have pushed a number of misleading narratives about the complaint, and an article published on September 27 by Federalist co-founder Sean Davis is the latest flashpoint in right-wing attempts to spin the allegations in a favorable light to Trump.

According to Davis, a form available in May contains language suggesting complainants must have firsthand knowledge of wrongdoing to file an “urgent concern” complaint -- the type of complaint filed by the Ukraine whistleblower -- but that the form was revised at some point to remove that language. (But according to a senior fellow at the libertarian Cato Institute, the likely explanation for the change was that the information in the previous form was inaccurate on the issue of firsthand knowledge and was therefore updated.)

(G) In this paragraph, the term “urgent concern” means any of the following:

(i) A serious or flagrant problem, abuse, violation of law or Executive order, or deficiency relating to the funding, administration, or operation of an intelligence activity within the responsibility and authority of the Director of National Intelligence involving classified information, but does not include differences of opinions concerning public policy matters.

(ii) A false statement to Congress, or a willful withholding from Congress, on an issue of material fact relating to the funding, administration, or operation of an intelligence activity.

(iii) An action, including a personnel action described in section 2302(a)(2)(A) of title 5, constituting reprisal or threat of reprisal prohibited under subsection (g)(3)(B) of this section in response to an employee’s reporting an urgent concern in accordance with this paragraph.

Another way to see that there is no such requirement is to look at an opinion issued by Trump’s Department of Justice that attempted to push back against a determination by the inspector general for the intelligence community that the whistleblower complaint did indeed qualify as an “urgent concern.” On September 24, the Office of Legal Counsel -- a DOJ entity that “provides legal advice to the President and all executive branch agencies” -- issued an 11-page complaint detailing arguments against the determination. Notably, there is no discussion of a firsthand knowledge requirement. If there was, the OLC opinion would undoubtedly have simply stated that the complaint was prima facie inadequate for “urgent concern” status.

It is also important to keep in mind that despite numerous attempts by right-wing media to discredit the complaint because it is “hearsay,” that argument has been largely rendered moot as the central allegation of complaint -- that Trump asked Ukraine to investigate Biden -- has been corroborated. The fact that the “transcript” of the call released by the White House lines up with the central allegation of the complaint makes it immaterial how exactly the whistleblower learned of Trump’s actions, because the whistleblower accurately described them. The credibility of the complaint, which also alleged that the Trump administration moved the Ukraine call transcript into a highly classified computer system, is also bolstered by the White House’s acknowledgement that it did take that action.

Although the issue of firsthand versus secondhand knowledge is moot, Davis also tried to undermine the whistleblower complaint by mischaracterizing what exactly the whistleblower alleged. In his article, Davis writes that “the complainant acknowledged he was ‘not a direct witness’ to the wrongdoing he claims Trump committed.” Not so. Here is what the relevant line from the complaint says (emphasis added): “I was not a direct witness to most of the events described.” That suggests the complainant does have some firsthand knowledge.