Observers in the media are declaring that Fox News' political activism has damaged the Republican Party in light of its losses in the 2012 elections. Fox figures have actively campaigned for Republican candidates over the past four years and instructed GOP officials on how to behave once they're elected.

The Atlantic's Friedersdorf: Misinformation From Fox And Conservative Media Cost Romney The Election. Conor Friedersdorf wrote for The Atlantic that “right-leaning outlets like Fox News and Rush Limbaugh's show are far more intellectually closed than CNN or public radio. If you're a rank-and-file conservative, you're probably ready to acknowledge that ideologically friendly media didn't accurately inform you about Election 2012.” Friedersdorf continued:

How many hours of Glenn Beck conspiracy theories did Fox News broadcast to its viewers? How many hours of transparently mindless Sean Hannity content is still broadcast daily? Why don't Americans trust Republicans on foreign policy as they once did? In part because conservatism hasn't grappled with the foreign-policy failures of George W. Bush. A conspiracy of silence surrounds the subject. Romney could neither run on the man's record nor repudiate it. [The Atlantic, 11/7/12]

SF Chronicle Columnist Carroll: “Could It Be That The Fox Model Has Played Out?” In a November 9 column, the San Francisco Chronicle's Jon Carroll described watching Fox, MSNBC, and PBS on Election Night. He wrote:

You had to wonder about Fox. This is the third presidential election in which Fox has been a major player, and the Democrats have won two of them. A combination of big money and big propaganda was supposed to carry the day for Romney and the Republicans, but it didn't.

Could it be that the Fox model has played out? Could it be that the lack of civility and grace, the embrace of the most extreme candidates as long as they were Republicans, indeed, the whole idea behind Roger Ailes' brainchild -- a pimping station for the far right -- may be politically bankrupt?

Carroll concluded by asking, “Could a moderate Republican get nominated in the era of Fox News? I don't think so. And as long as that's so, Fox News hurts the GOP.” [San Francisco Chronicle, 11/9/12]

American Prospect's Waldman: Fox And Conservative Media May Be “The Right's Achilles' Heel.” Paul Waldman wrote in The American Prospect that Fox and other conservative media are effective at “whipping up stories out of nothing and forcing the mainstream media to pay attention, capable of keeping their troops in line and bucking up their morale, capable of quickly disseminating messages far and wide, creating new stars and enforcing discipline.” But the success of this misinformation resulted in the “single most damaging moment for Mitt Romney in this election, the 47 percent tape”:

Where did Romney learn that number, wrapped as it was in an argument about the shocking numbers of Americans who mooch off the efforts of virtuous hard-working job creators? He almost certainly got it from Fox or conservative talk radio, where it had been in wide circulation for some time, and if it wasn't directly from listening to Limbaugh or Hannity, it came to him from somebody who did. [The American Prospect, 11/8/12]

Slate's Benedikt: Fox Wins By Demonizing Democrats With Stories “To Feed Into The GOP Bloodstream,” But Republicans Lose. On November 7, Slate's Allison Benedikt discussed how "[w]ith massive funds and infinite air time, Roger Ailes' little network that could spent the past four years demonizing President Obama (after a year of demonizing candidate Obama), and obsessively churning up non-news" to “feed into the GOP bloodstream,” yet Obama won a second term and Democrats gained seats in Congress. Benedikt wrote:

For the ratings whores, it's likely true that four more years of Obama is exactly what the network needs -- but it's clearly not what's best for, say, Chris Christie. Fueled by intensity and hatred, Fox thrives as the opposition. The trouble is that for the GOP to survive, Republican candidates eventually have to get votes. When they fail, Fox gets to keep on printing money. [Slate.com, 11/7/12]

Salon's Pareene: “Fox Discovers Constant Lying Isn't Consistently Effective Electoral Strategy.” In a November 7 blog post, Salon.com's Alex Pareene suggested that Fox “knows it's constantly lying to its audience.” He commented: “In the Bush era this was fine for morale. In the first years of Obama's term it was good for midterm election turnout. But it's apparent that it's clearly bad for the movement in the long term. Counting midterms, the parallel conservative media has now utterly failed to grasp the reality of the American electorate in three of the last four national elections.” [Salon.com, 11/7/12]

Telegraph's Hodges: “Fox News Is Killing The Republican Party.” Dan Hodges wrote a November 8 article for The Telegraph titled “Fox News Is Killing the Republican Party.” He stated that “Fox News, widely perceived to be one of the Republican party's greatest assets, has actually become a liability to it.” Fox News, he wrote, was “an albatross around the neck of Mitt Romney.” Hodges also wrote that Fox's misinformation “provides a false comfort zone for conservative politicians and their supporters.” [The Telegraph, 11/8/12]

Fox News Employees Campaigned For Republicans In 2012 And 2010

In 2010 Election, Over 30 Fox Personalities Campaigned For Republicans. During the 2010 election cycle, more than 30 Fox hosts and contributors endorsed, fundraised, or campaigned for Republican candidates. [Media Matters, 4/21/10, 10/27/10]

Fox Hosts Advised Romney About What He Should Do ...

O'Reilly: Romney Should “Fluster” Obama. In a discussion with Fox News senior political analyst Brit Hume, Bill O'Reilly said that Romney “hasn't been forceful enough,” and encouraged Romney to “fluster” Obama during the debates.  He also encouraged Romney to convince Americans he can “fix” the economy by saying, “Hey, I'm your handy man here. I can fix it.” [Fox News, The O'Reilly Factor, 10/1/12, via Media Matters]

Bolling: “Mitt, Get Back To The Economy.” Addressing Romney on The Five, co-host Eric Bolling told the candidate: “Mitt, get back to the economy. That's how you're going to win. It's not going to be these other games.” [Fox News, The Five, 8/10/12, via Media Matters]

For more on how right-wing media advised the Romney campaign, click here and here.

... And Counseled Elected Republicans Not To Cooperate With Democrats

Fox Nation: “Palin Issues Stern Warning To Boehner About Debt Ceiling.” In July 2011, Fox contributor Sarah Palin told Newsweek that “she's against any deal that raises the debt ceiling and would hold House Speaker John Boehner's feet to the fire if he agreed to one.” Linking to an article in The Hill reporting on Palin's comments, Fox Nation posted the following headline: 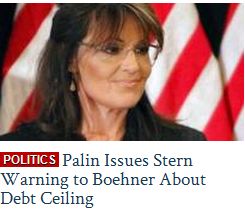 Hannity Tells Paul Ryan: “I Don't Think” Raising The Debt Ceiling “Is Something [Republicans] Should Compromise On.” On the April 5, 2011, broadcast of his Fox News show, Sean Hannity told Rep. Paul Ryan not to vote to raise the debt ceiling. Hannity stated, “My question is, I believe that the Republicans need to stand by their promise. They promised that they would stand for this. I don't think this is something they should compromise on.” [Fox News, Hannity, 4/5/11]

Fox & Friends Urges House Republicans To Repeal Light Bulb Efficiency Standards. On the July 11, 2011, edition of Fox News' Fox & Friends, the co-hosts discussed House Republicans' efforts to repeal light bulb efficiency standards. Co-host Steve Doocy claimed that the House is attempting to repeal “that kooky law that said incandescent bulbs ... got to go away.” Co-host Kilmeade replied, “We can still stop it. We can still save the bulb if we act now.” [Fox News, Fox & Friends, 7/11/11]