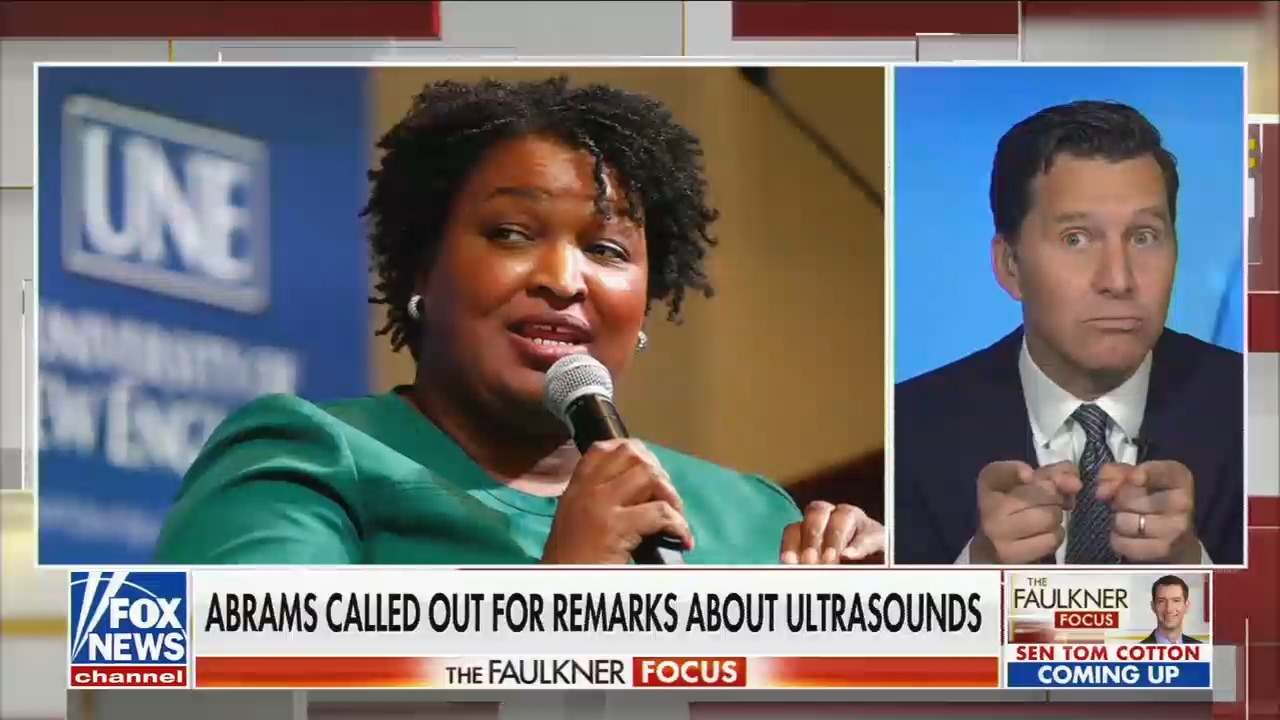 On the Thursday edition of The Faulkner Focus, Fox host Will Cain responded to Georgia gubernatorial candidate Stacey Abrams debunking the medically inaccurate concept of a prenatal heartbeat at six weeks, attacking Abrams for spreading what he described as a “QAnon-plus level” conspiracy theory.

In late July, a federal court greenlit Georgia’s six-week abortion ban, allowing the restriction to take effect after being stalled in the court system since Georgia Gov. Brian Kemp signed the law in 2019. Anti-abortion advocates have long called for banning abortion at six weeks of pregnancy, fasely asserting that a “fetal heartbeat” can be detected at that point.

During a panel discussion in Atlanta this week, Abrams addressed Georgia's six-week ban, stating, “There is no such thing as a heartbeat at six weeks. It is a manufactured sound designed to convince people that men have the right to take control of a woman’s body away from her.”

The American College of Obstetricians and Gynecologists has spoken out against “heartbeat” legislation, such as the standing law in Georgia, for its deceptive nature:

It is clinically inaccurate to use the word “heartbeat” to describe the sound that can be heard on ultrasound in very early pregnancy. In fact, there are no chambers of the heart developed at the early stage in pregnancy that this word is used to describe, so there is no recognizable “heartbeat.” What pregnant people may hear is the ultrasound machine translating electronic impulses that signify fetal cardiac activity into the sound that we recognize as a heartbeat.

On her Thursday program, Fox’s Harris Faulkner falsely stated, “What doctors will say is that between five to seven weeks is where that [a fetal heartbeat] happens.”

In reality, there’s a consensus among medical experts that “the electrical activity picked up on an ultrasound at six weeks is not the sound of a heart beating,” nor does it “guarantee a live birth.”

Will Cain went on to twist Abrams’ words to disingenuously suggest that she believes men and medicine have conspired against women to control their bodies, belittling her and commenting, “This is someone you’re supposed to take seriously.”

Correction (9/23/22): The piece has been updated to correct the name of the American College of Obstetricians and Gynecologists.