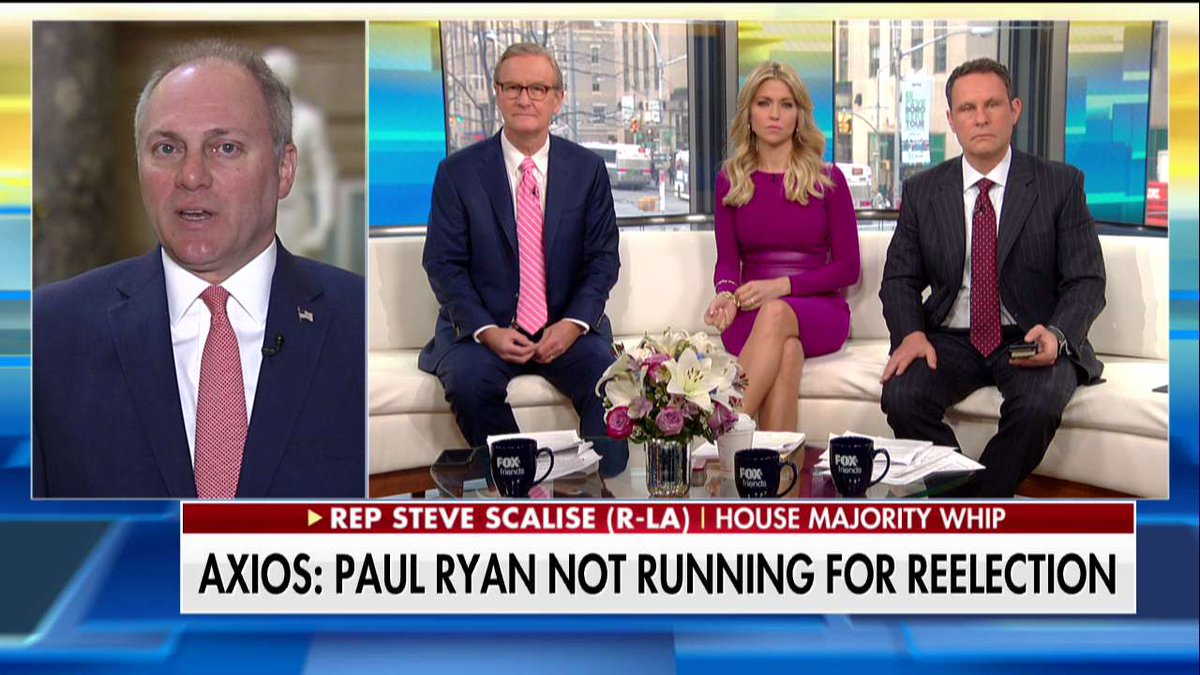 Within an hour after Axios broke the news that House Speaker Paul Ryan (R-WI) will not seek re-election, Rep. Steve Scalise (R-LA), the third-ranking Republican in the House and a likely candidate to succeed Ryan, repeatedly praised President Donald Trump in an interview on the president’s favorite program, Fox & Friends.

Axios reported at 8:10 a.m. EST that Ryan “has told confidants that he will announce soon that he won't run for re-election in November,” that Scalise and House Majority Leader Kevin McCarthy (R-CA) are the “two most likely to replace him,” and that Ryan would tell his Republican colleagues his plans at a meeting today. (Politico previously reported that Scalise was “angling” for the post but that he said he would not challenge McCarthy if he ran.)

Fewer than 40 minutes after the Axios story was published, Scalise appeared on Fox & Friends, introduced as a possible “likely replacement” for Ryan. Asked by host Steve Doocy if he was interested in the position, Scalise demurred, suggesting that he wouldn’t comment on the issue before Ryan’s address later today.

Scalise’s comments appeared directed to an audience of one: the president himself, who dominates his party and can make or break a would-be GOP leader’s campaign, regularly watches the program, and apparently was doing so this morning. If Scalise does seek to replace Ryan as the top Republican in the House, he would benefit from the support of the president, who reportedly has a “tight relationship” with McCarthy.

UPDATE: On Thursday, McCarthy had his own Fox & Friends audition, and similarly applauded the president.

As Steve Scalise did yesterday, Kevin McCarthy uses his Fox & Friends audition to lavish praise on President Trump. Says Trump “focuses just on the work,” “you wouldn't know this man has anything else going on in his life than getting his agenda through, and the wall.” pic.twitter.com/eEAeAZXGeF