Websites and social media personalities that traffic in fake news took advantage of Hurricane Irma to spread false information. While the hurricane made landfall in the Caribbean and parts of Florida, many fake news stories that could potentially impede recovery efforts made their way onto social media sites. As during Hurricane Harvey, these purveyors of false information again showed that they will take advantage of any event, no matter how tragic, to promote and exploit fake news with clickbait headlines.

The Last Line of Defense, a website that claims it is satirical but whose pieces have been co-opted by fake news purveyors pushing them as fact, made up a story that legendary Marvel Comics writer and publisher Stan Lee fired actress Jennifer Lawrence from future X-Men movies for comments she purportedly made regarding Hurricane Irma and climate change, with Lee calling her a “little bitch.” The story was then shared by multiple fake news purveyors. The patriotusa.press version of the post was shared the most, drawing more than 4,600 Facebook engagements, according to social media analytics website BuzzSumo, and reaching 249,472 people across various social media platforms according to CrowdTangle, another analytics service. 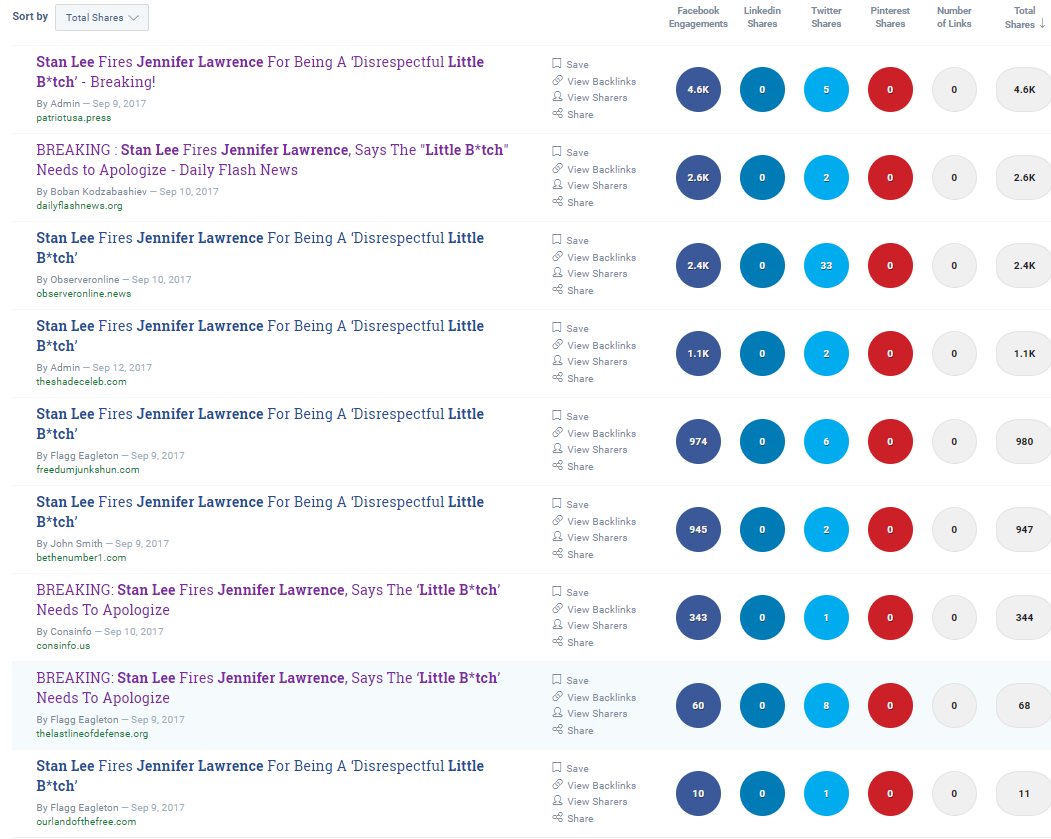 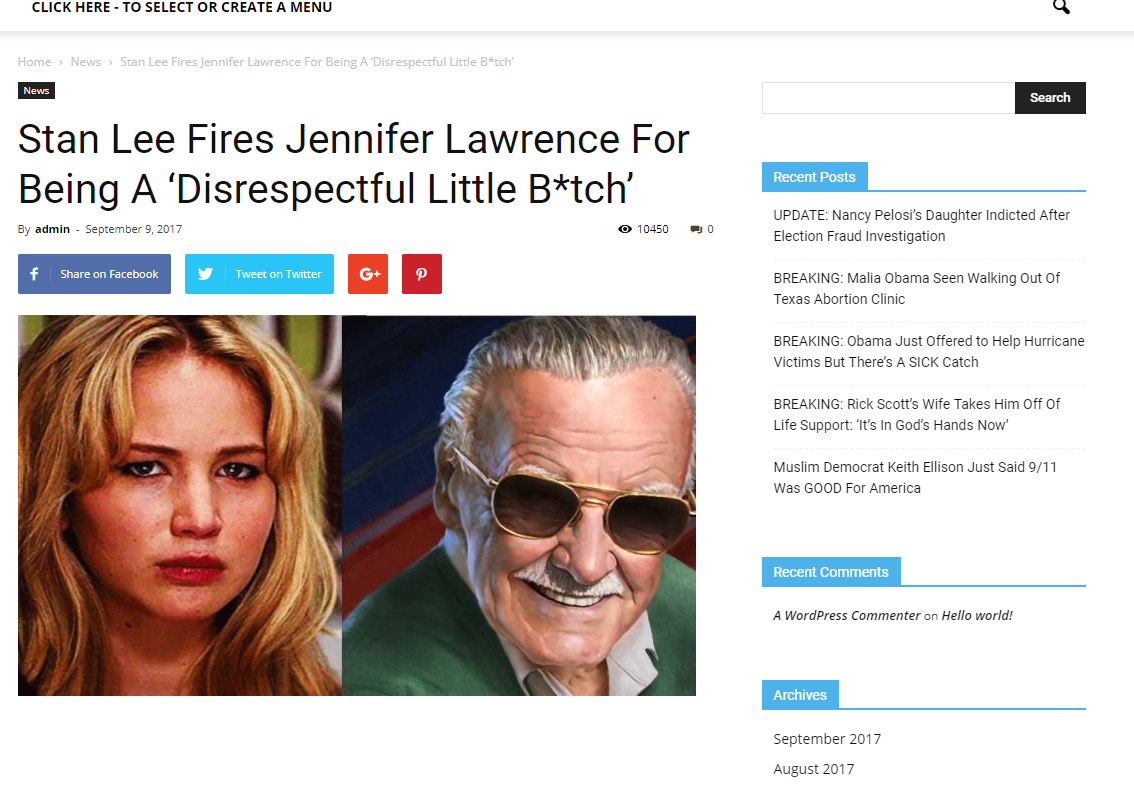 On September 10, White House social media director Dan Scavino shared a video on Twitter of what he claimed was “Miami International Airport” flooding during Irma and tagged President Donald Trump and Vice President Mike Pence. The airport’s Twitter account responded to Scavino, saying, “This video is not from Miami International Airport.” Scavino, who has previously tweeted articles from known fake news purveyors, later deleted the tweet. 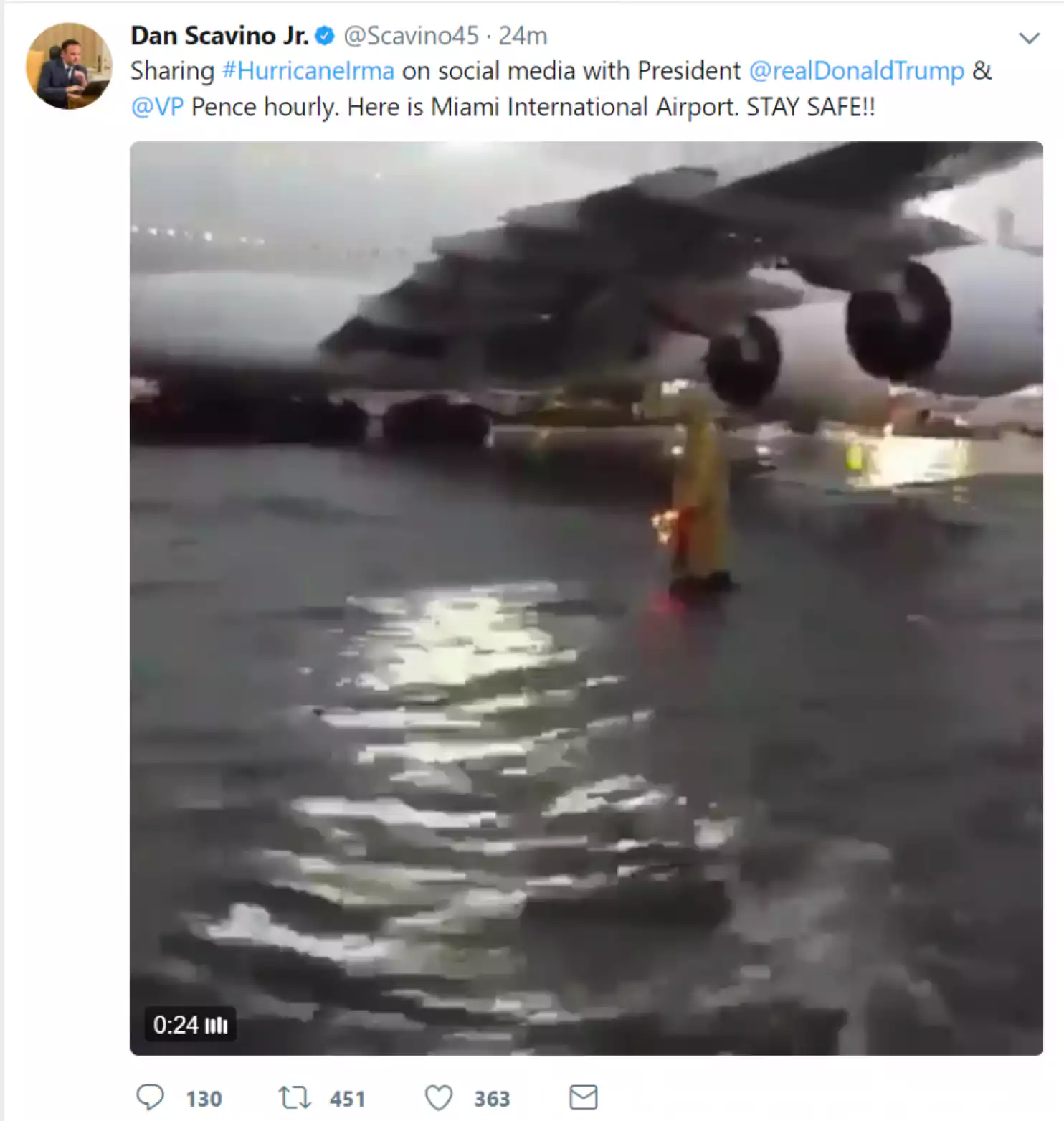 On September 6, a YouTube account uploaded a video of what it claimed was a building collapsing on the Caribbean island of Saint Martin due to Irma. As BuzzFeed noted, the video was actually from a flood in Tibet. The fake video was subsequently shared by the British tabloid Daily Mail (the paper later deleted its post) and by at least one other blog. 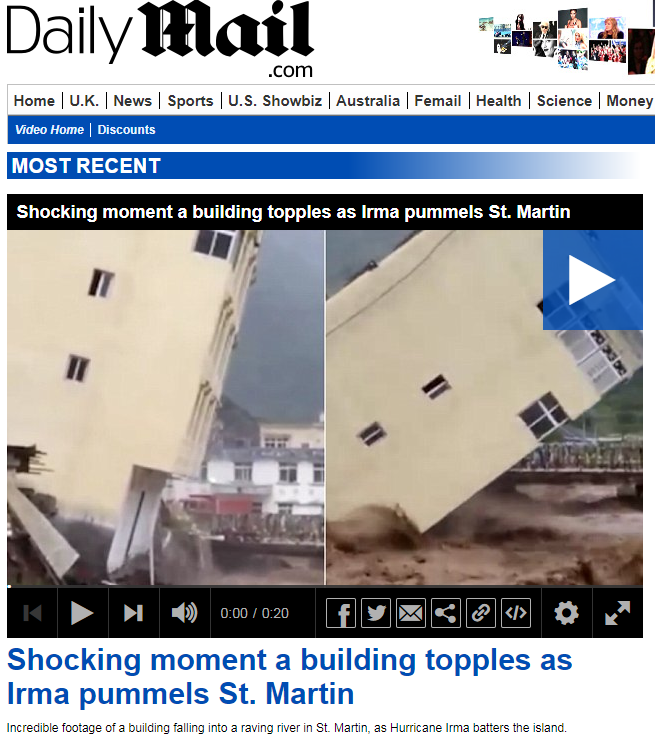 Fake news and hyperpartisan websites shared a fake photo of what they claimed was damage to an airport in the Caribbean due to Irma. As BuzzFeed noted, the photo was actually of a Mexican airport after a 2014 hurricane. Multiple French-language journalists and Univision also shared the image. 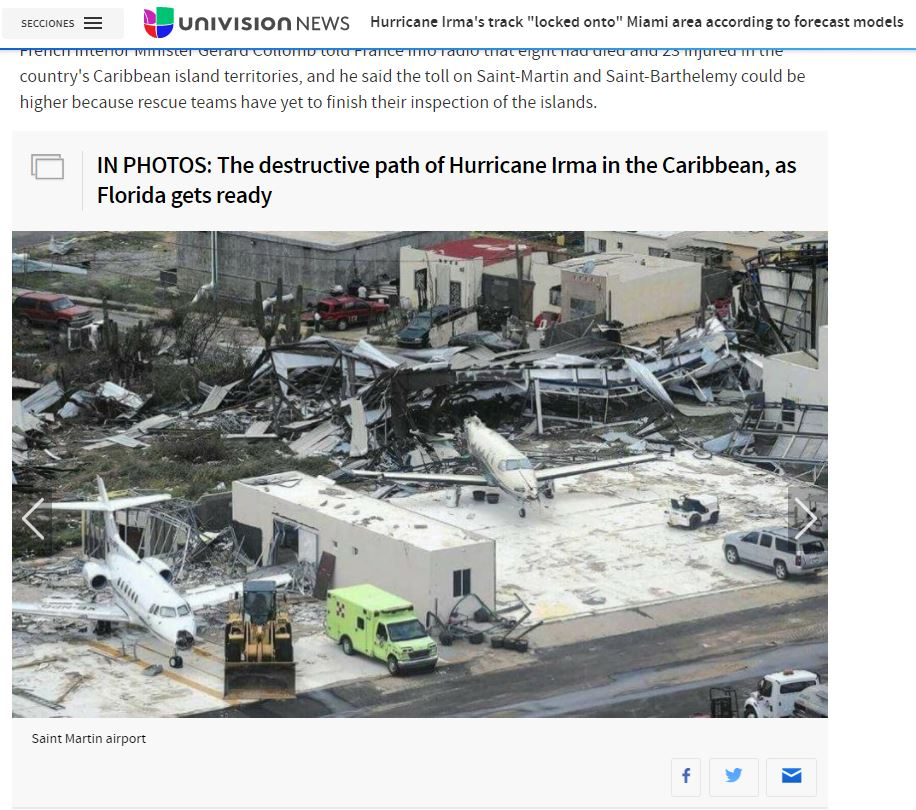 White nationalist Hal Turner published a piece on his website claiming, “Computer Model Shows IRMA DESTROYING New York City & NJ on Sept. 10.” As PolitiFact noted, there were no such computer models with that prediction. Turner’s false claim was later reposted by News Prepper, another fringe blog, which drew more than 2,600 Facebook engagements and reached 45,575 people, according to BuzzSumo and CrowdTangle, respectively. Fake news purveyor YourNewsWire also reposted the piece. 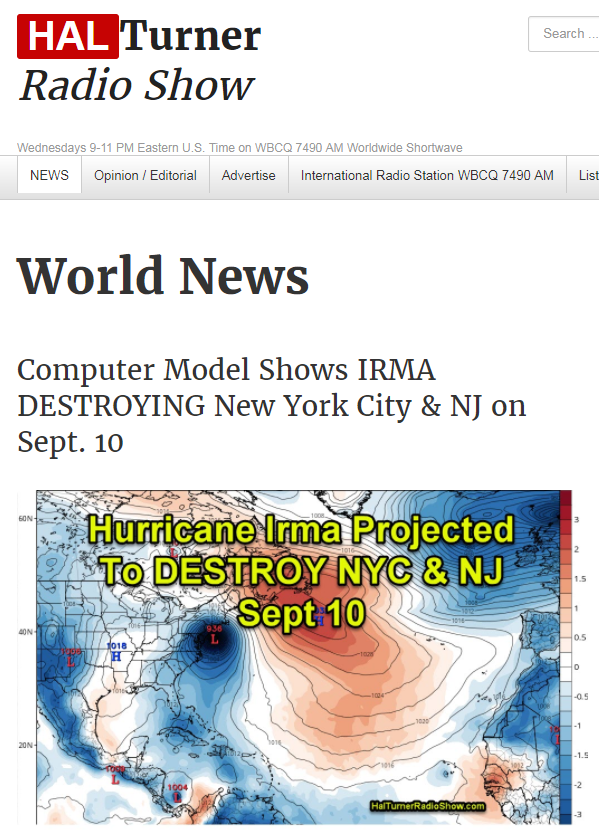 Satirical website Freedumjunkshun made up a story that Jared Kushner, President Trump’s son-in-law and advisor, was missing after Mar-a-Lago was destroyed during Irma (which is also false). The Last Line of Defense's Facebook page and fake news purveyor patriotusa.press also shared the fabricated story. The patriotusa.press post drew at least 224 Facebook engagements and reached 124,704 people, according to BuzzSumo and CrowdTangle, respectively. 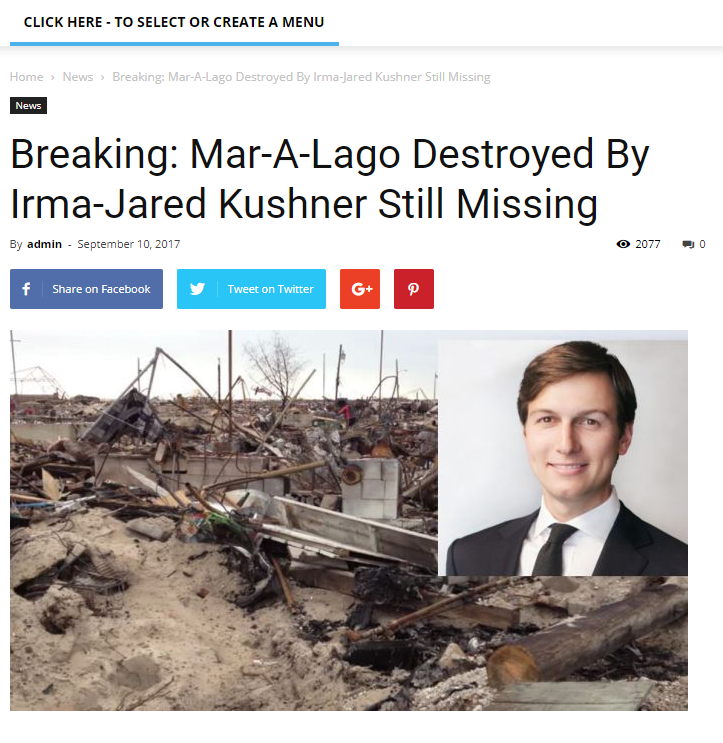 The Last Line of Defense made up a story that FL Gov. Rick Scott (R) was injured during cleanup after Irma. Multiple fake news purveyors shared the story. The most widely shared version, from patriotusa.press, drew more than 2,600 Facebook engagements and reached 124,704 people, according to BuzzSumo and CrowdTangle, respectively. 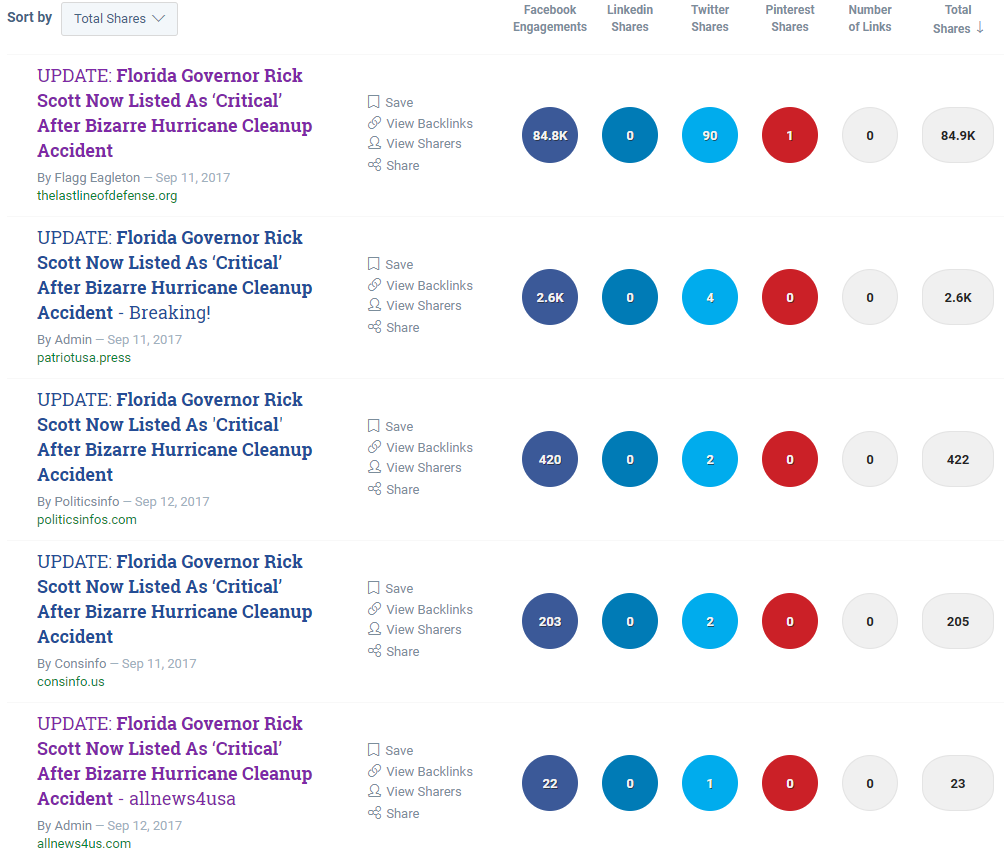 Fake news purveyor Freedom Daily falsely claimed that Muslims had a “disturbing plan” to “poison food in the supermarkets.” As PolitiFact noted, there had been no reports of active plots of poisoning. The Freedom Daily article, which was later deleted, drew at least 564 Facebook engagements, according to BuzzSumo. 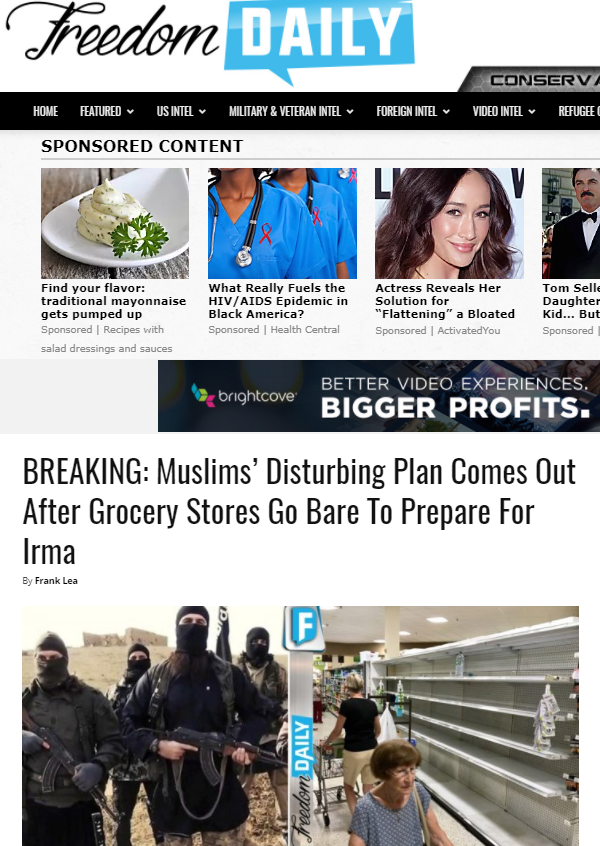 On September 11, a YouTube user named ViralVideoLab uploaded a video purporting to show sharks “in a flooded street in miami.” The post, as Snopes noted, contained “heavy hints that [the video] was less than authentic” and featured fake fins. The fake video was published by British tabloids Daily Star and The Sun (which reported “animal enthusiasts” casting doubts on the authenticity of the video), along with a West Virginia radio station’s Facebook page. The video was also shared on Facebook by skateboarder Bam Margera and on Twitter by musician AKON (who later deleted the tweet). 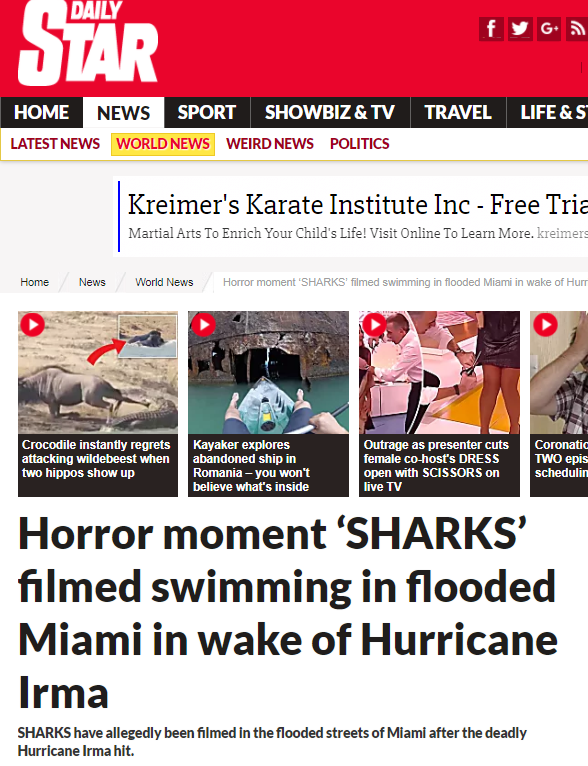