Websites that traffic in fake news have taken advantage of Hurricane Harvey to widely circulate misinformation about the storm on social media. As Hurricane Irma follows close on Harvey’s heels -- it has already hit the U.S. Virgin Islands and is on track to reach Puerto Rico and Florida -- people’s lives may depend on receiving accurate information. Fake news about Hurricane Irma is already starting to pop up; one viral video that was purported to show Irma, actually showed a tornado hitting Uruguay from over a year ago, according to BuzzFeed. Fake news stories that sprung up after Harvey should serve as a warning for the coming days.

Our Land Of The Free, a website that claims to be satirical (yet has been used by fake news purveyors multiple times), published a piece headlined “Black Lives Matter THUGS Blocking Emergency Crews From Reaching Hurricane Victims.” The made-up piece subsequently reached multiple fake news purveyors who pushed it as a legitimate story.

Flash American News’ repost of the story received more than 10,600 Facebook engagements according to social media analytics website BuzzSumo and was shared to over a million people across various social media platforms according to CrowdTangle, another analytics service. The story was also shared on Reddit forum “r/The_Donald” that has previously helped far-right trolls and fake news purveyors spread misinformation, where one user encouraged the fake story “to be shared widely.”

Multiple fake news purveyors falsely claimed that Houston Mayor Sylvester Turner “vanished” when Harvey hit Houston. One of the posts was shared on Reddit forum “r/The_Donald,” while the post from Proud Patriots, which received one of the highest number of views, was shared to 1,717,368 people, according to CrowdTangle. Another version of the story on World Politicus received more than 6,000 Facebook engagements, according to BuzzSumo.

Multiple fake news purveyors posted as legitimate news a story from another self-identified satirical website called The Last Line Of Defense. Stories from the site have been used by fake news purveyors multiple times. According to the story on The Last Line of Defense, “Ramashan Mosque outside of Houston” refused to take in “any non-Muslim people” impacted by the storm. These posts used a photo of a Canadian imam as the face of their stories; the imam in question says he has never been to Texas. 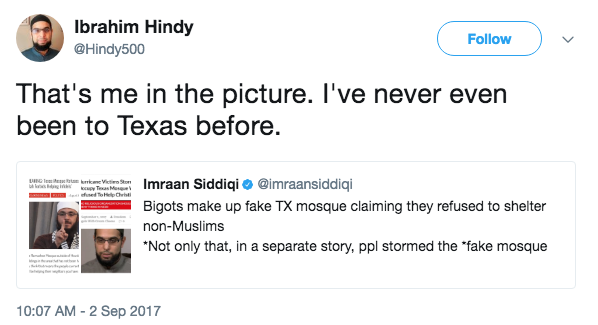 Multiple fake news purveyors ran with another article from Our Land Of The Free claiming that the Clinton Foundation was charging $7 for bottled water to people in Houston who were impacted by Harvey.

The fake news article from patriotusa.press that got the highest number of views, received more than 4,100 Facebook engagements according to BuzzSumo and reached 249,698 people according to CrowdTangle.

False: Donations from some celebrities for Harvey aid

Fake news purveyors made up donations from multiple celebrities, including boxer Floyd Mayweather, boxer Manny Pacquiao, Princes William and Harry, and athlete Usain Bolt. Some of these fake news stories were shared by TheBlaze host and frequent Fox News guest Lawrence Jones and by Michael Flynn Jr., son of former national security adviser Michael Flynn. The fake Mayweather story in particular received more than 544,700 Facebook engagements, according to BuzzSumo, and was shared with over 41 million people, according to CrowdTangle.

At least one fake news purveyor, American News (which has millions of followers on Facebook), pushed as legitimate a story from a satirical blog claiming that a Navy destroyer hit a Houston building due to flooding caused by Harvey. The satirical article was also shared on Reddit’s “r/The_Donald.” 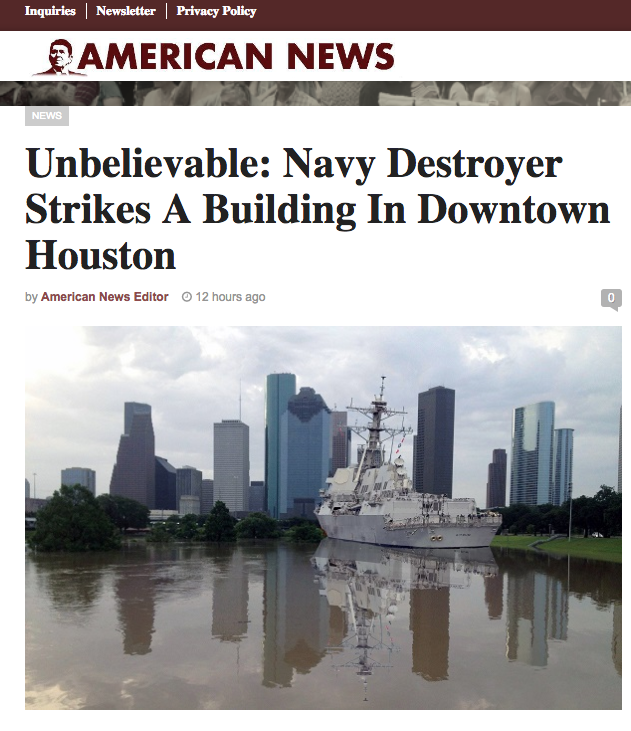 False: A secret Obama administration ammo deposit was discovered due to Harvey

Multiple fake news purveyors pushed a story from satirical website Our Land Of The Free claiming that “a cache of weapons long suspected to be hidden in Texas during Operation Jade Helm 15 was uncovered by the flood waters of Hurricane Harvey” that went “missing during Obama’s tenure.”

The repost of the story on Viral Feed, which had one of the highest number of views, had more than 14,100 Facebook engagements, according to BuzzSumo, and was shared to 257,828 people, according to CrowdTangle. 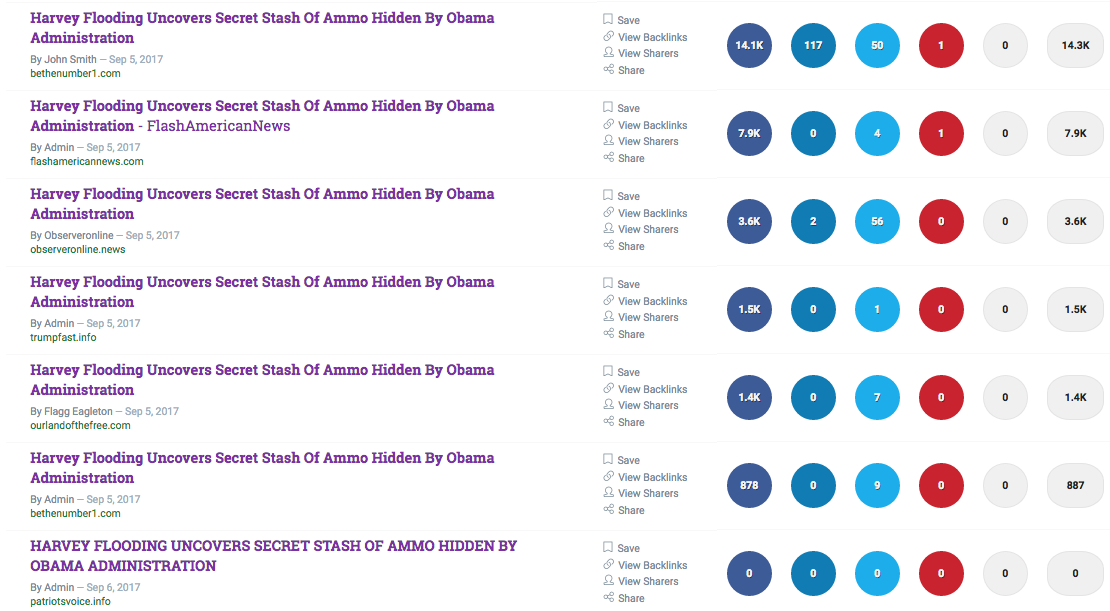 False: A Georgian mosque kept Harvey donations to send them to Syrian refugees

Fake news purveyor As American As Apple Pie published a fake news story about a fictional Georgia mosque diverting aid meant for Harvey survivors to Syrian refugees. Multiple other fake news purveyors ran with the fake story. Patriotusa.press also published the post which became the most widely shared version of the original post. 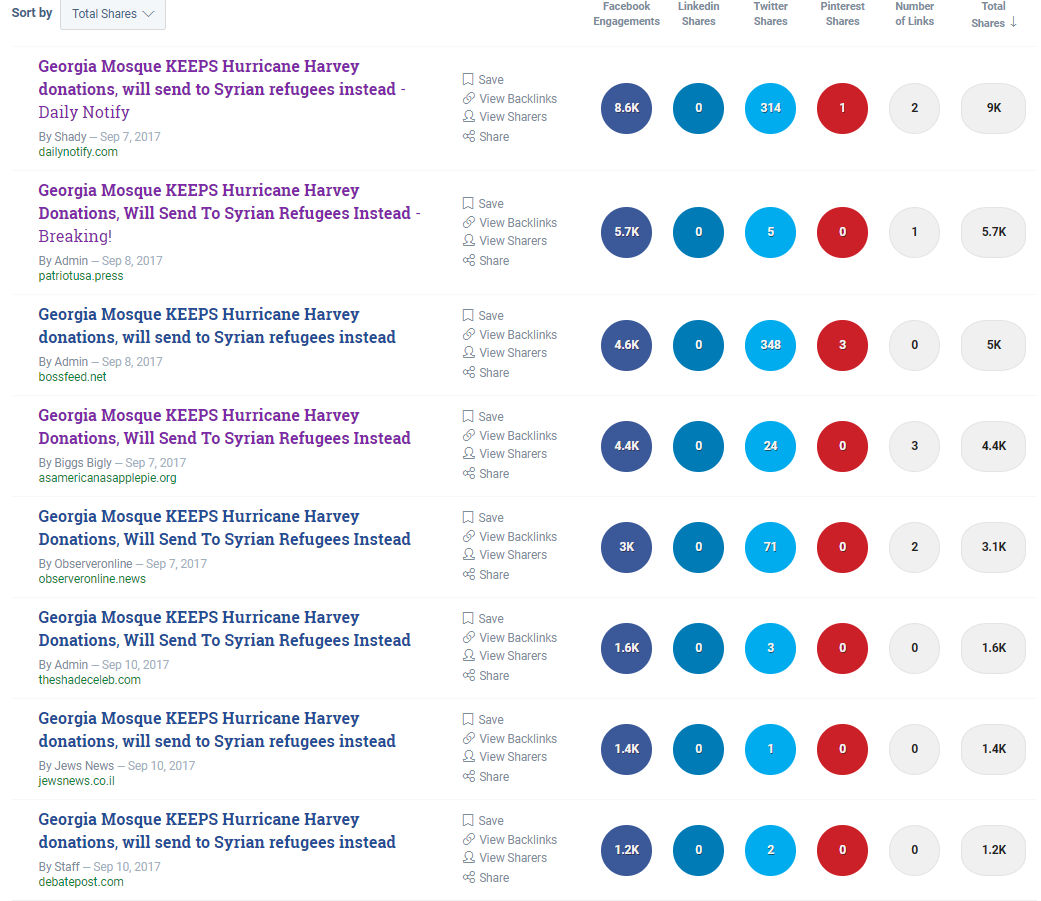 The Last Line of Defense then concocted a follow-up piece to the As American As Apple Pie article, claiming the imam of the fictional mosque in Georgia had been arrested. That article was also shared by multiple fake news purveyors. 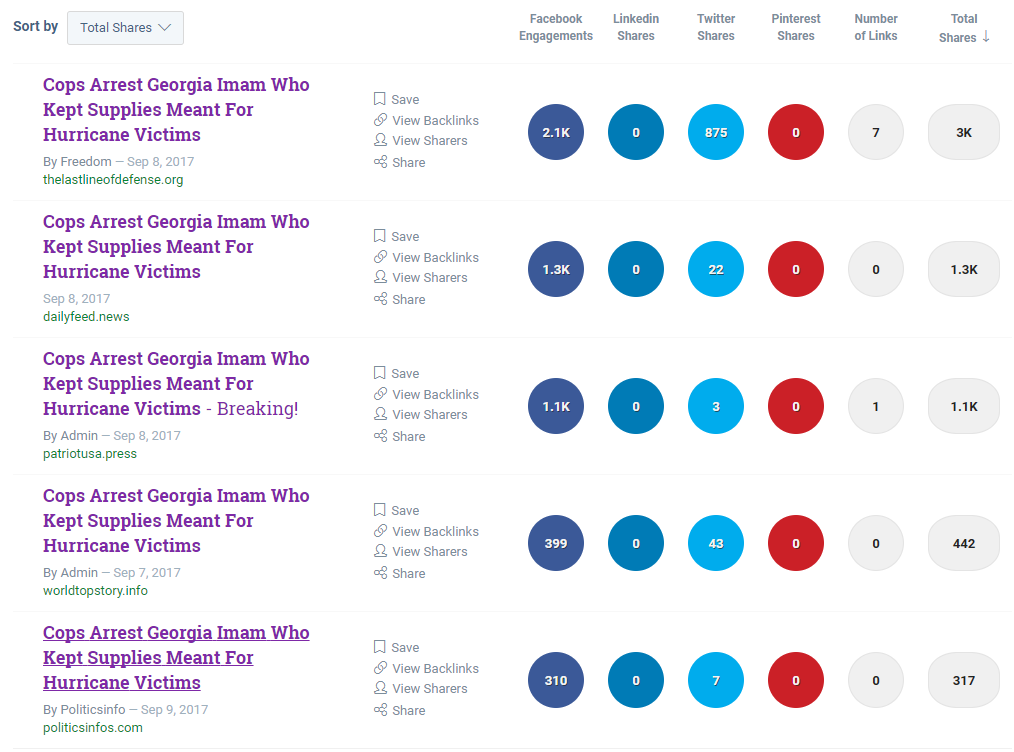 This post has been updated with an additional example.