Update (4/28/21): On April 28, administrators of a “secret” Facebook group created after Facebook removed the anti-vaccine group discussed here renamed it “C19 Vaccine Victims & Families.” This new name is nearly identical to the original group’s name, COVID19 VACCINE VICTIMS AND FAMILIES. The group has gained roughly 14,000 members in less than a week.

Facebook removed an anti-vaccine group that had already amassed more than 125,000 members, but this move will only minorly inconvenience the group, as members had already set up alternate channels of communication. What’s more, this group is only one of over 100 active Facebook groups that contain harmful anti-vaccine misinformation.

On April 22, Facebook removed a large private group dedicated to gathering stories of people allegedly injured by the COVID-19 vaccine. According to the company, the group was removed because it had violated Facebook’s harmful misinformation policies. A spokesperson told BBC News, “We allow people to discuss the COVID-19 vaccines but if information could lead to someone being harmed, we remove it.”

On its face this seems like a step in the right direction for a platform that has been negligent in its response to dangerous COVID-19 misinformation. However, the group amassed more than 125,000 followers before it was taken down, and they are already successfully reorganizing, setting up a Telegram group and a new social media platform.

The removed group, COVID 19 VACCINE VICTIMS AND FAMILIES, was created on March 29, 2021, and its “About” section stated, “The idea of this group is for victims families to unite and for the victims stories to be heard so we can get justice.” The group grew rapidly, particularly in the four days before removal, when it gained an average of over 12,500 members per day. Members would share anecdotes about friends and relatives receiving the COVID-19 vaccine and falling ill, claiming the vaccine was the cause.

Before the Facebook takedown, group members began expressing concerns about possible removal and preparing to organize in other spaces. Invites to a Telegram group, set up on April 5, are still prominently displayed on Facebook, with instructions for users to join the channel in order to circumvent Facebook action. On April 18, the group created a new social media platform, modeled after Facebook but explicitly for “vaccine victims.” That same day, a Facebook user posted that the group had been “suspended” but said, “I think you can still join the fb group and read the stories before it’s removed.” The group has also launched a new Facebook group, under a pseudonym. In less than a day, the new group gained roughly 1,100 members, and at the time of publishing, it has roughly 4,000 members.

Of these 117 groups, some explicitly call themselves “anti-vaxx” or “anti-vaccine,” while others have similar names as the group Facebook removed. Some groups are likely trying to avoid moderation by using more deceptive language, such as “V@xynes” or “V@ccine.”

This private group with roughly 41,800 members promotes misinformation about the COVID-19 vaccine, including false claims that the vaccine will cause serious medical problems: 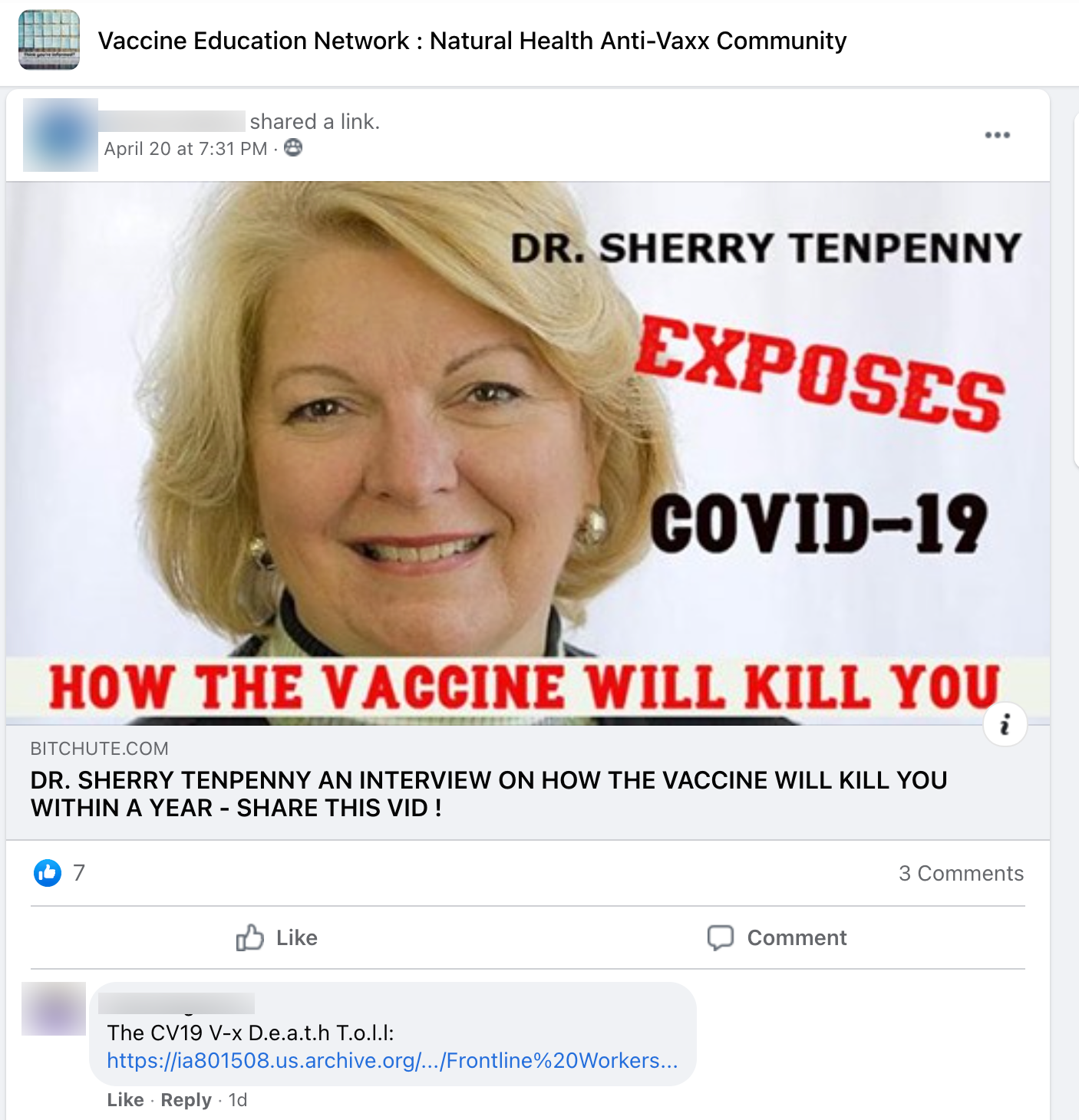 This private group with roughly 27,700 members is dedicated to pushing a baseless claim that the MTHFR gene causes a harmful reaction to the vaccine. Members in the group promote this baseless claim and provide each other with medical misinformation. Egregious examples include: 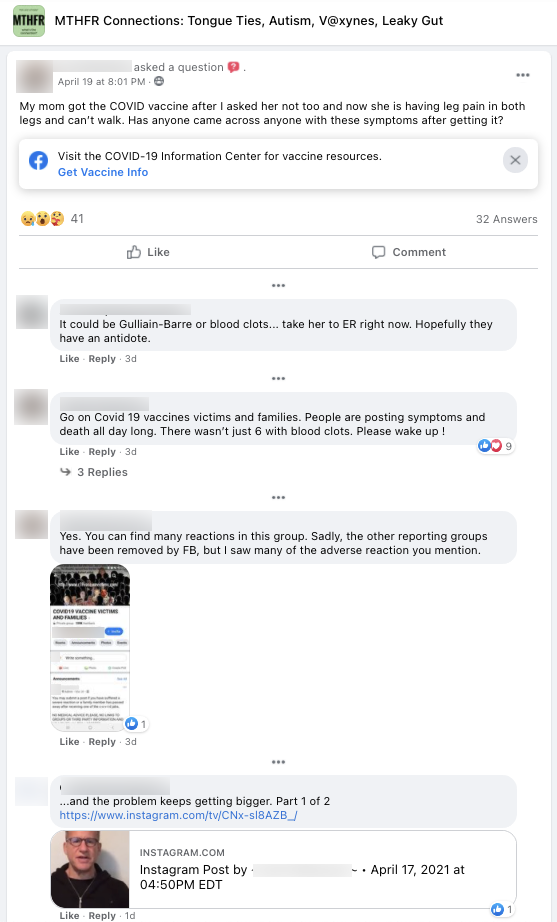 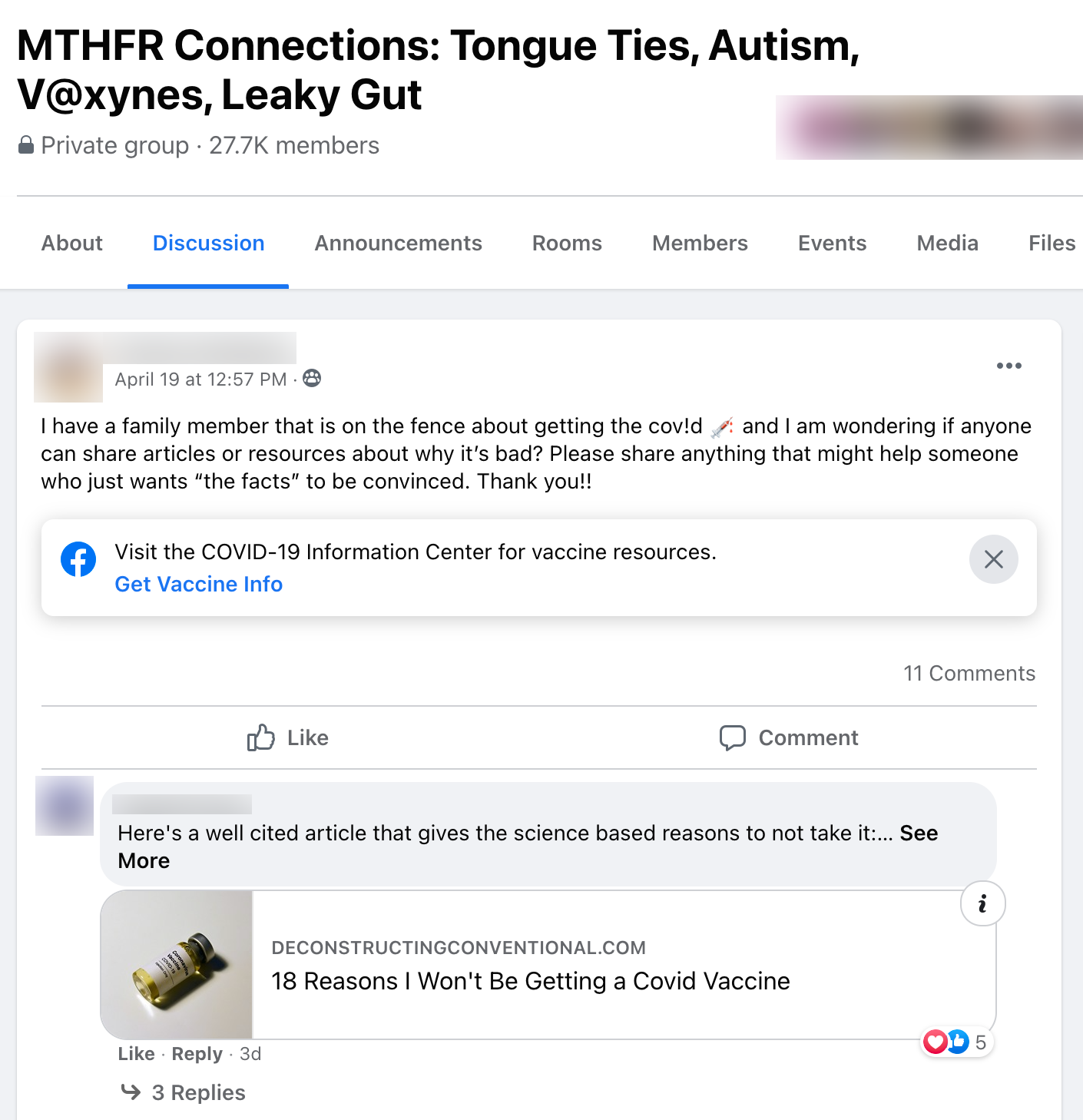 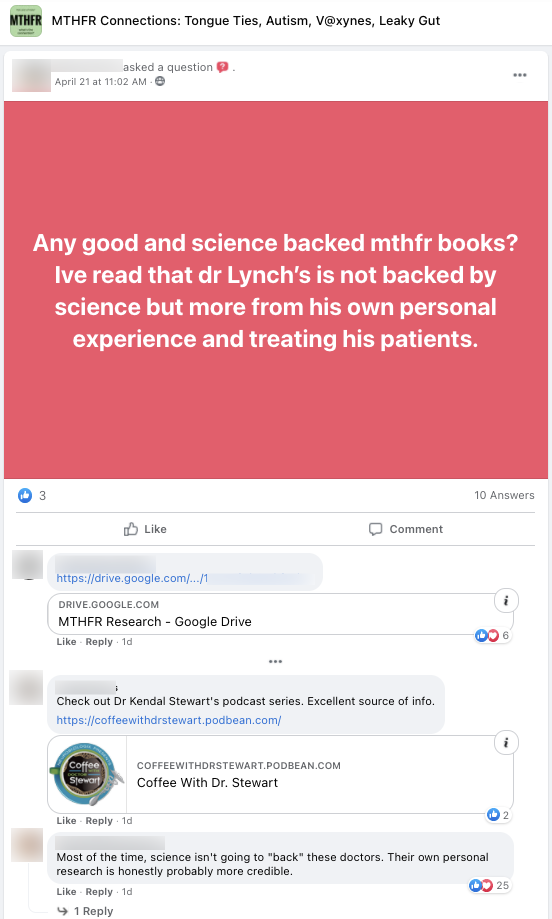 JUST FOR THE HELLTH OF IT

With roughly 18,000 members, this private group promotes misinformation about the COVID-19 vaccine and conspiracy theories, and it even has screenshots of posts from the anti-vaccine group that Facebook removed: 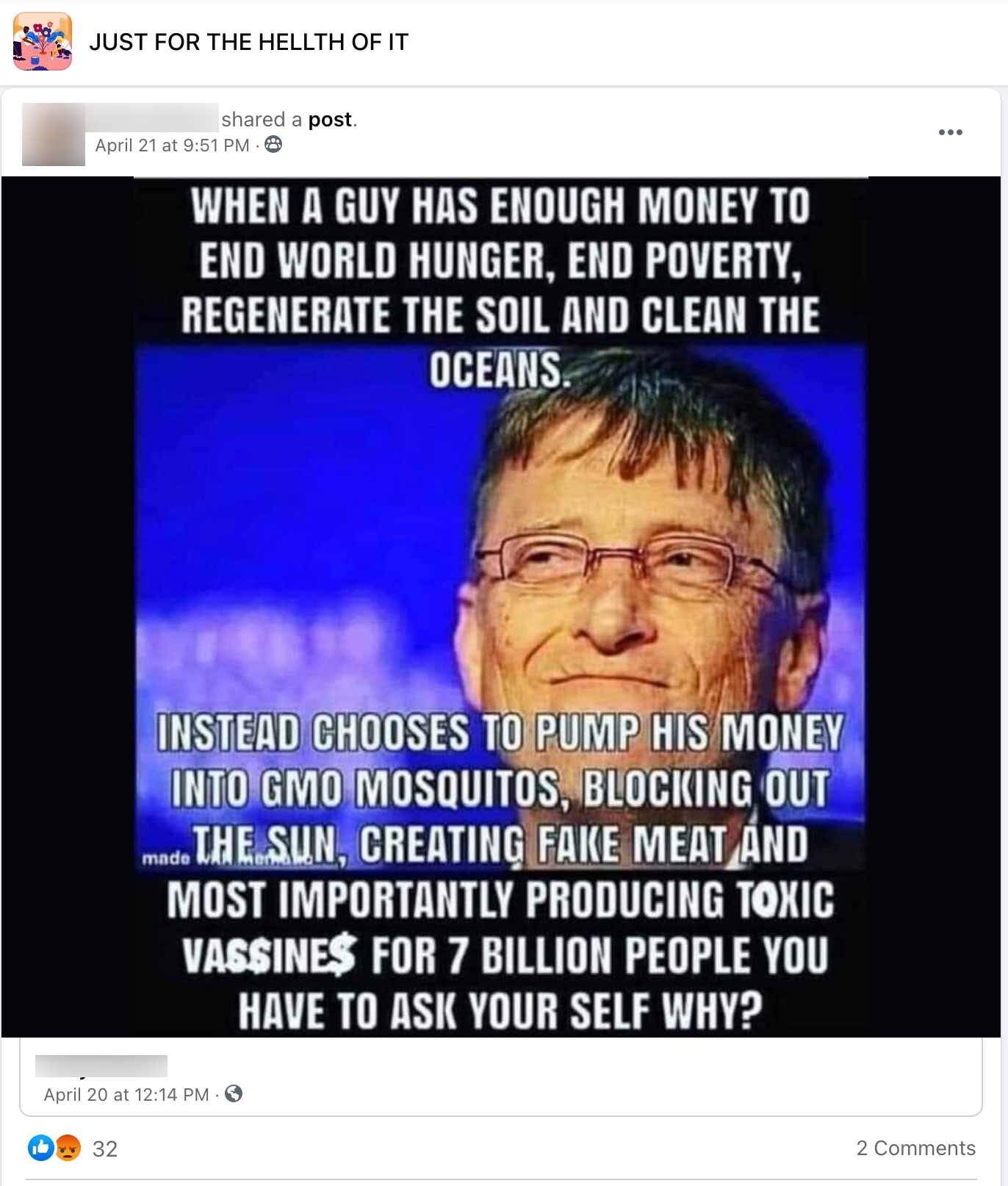 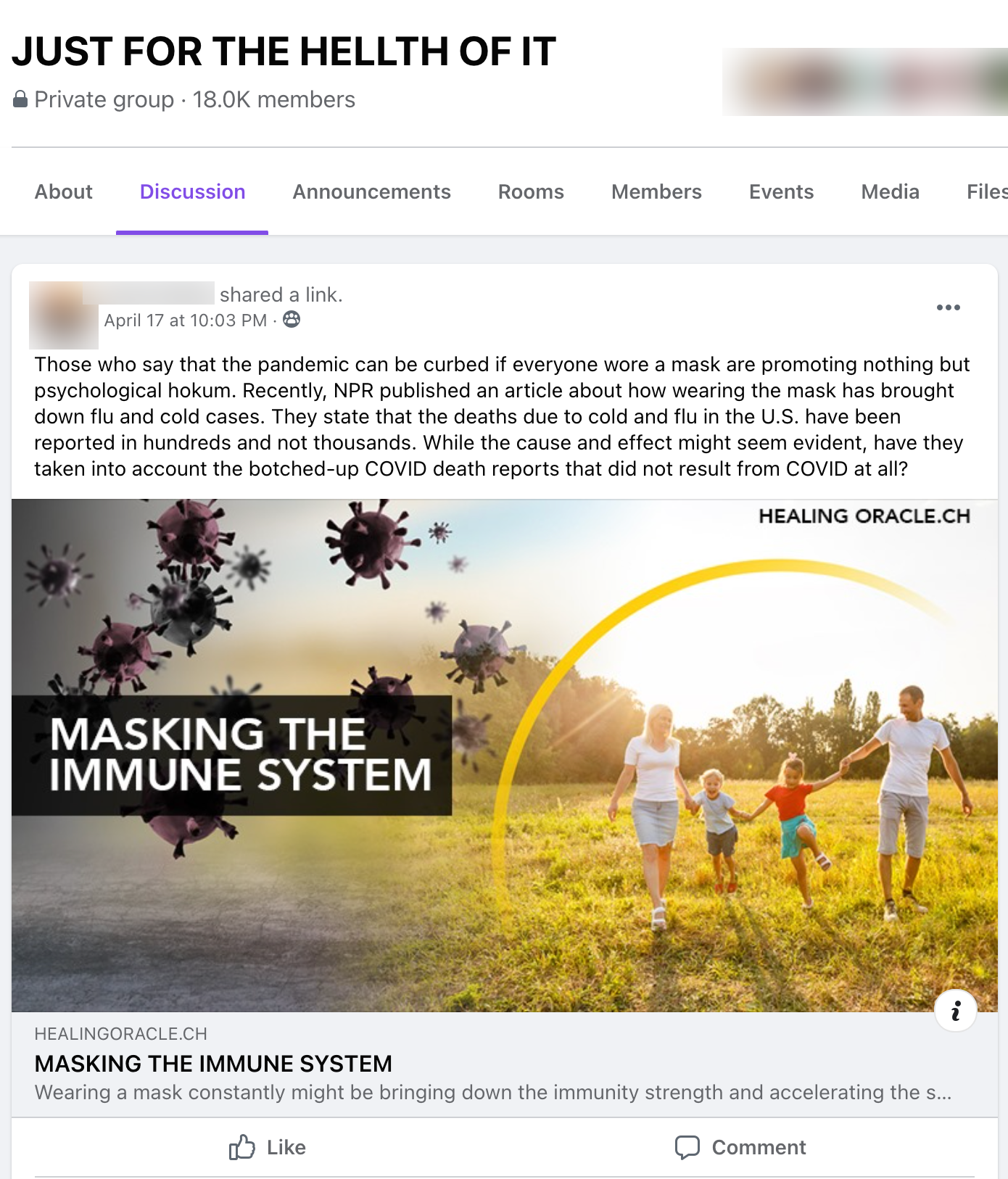 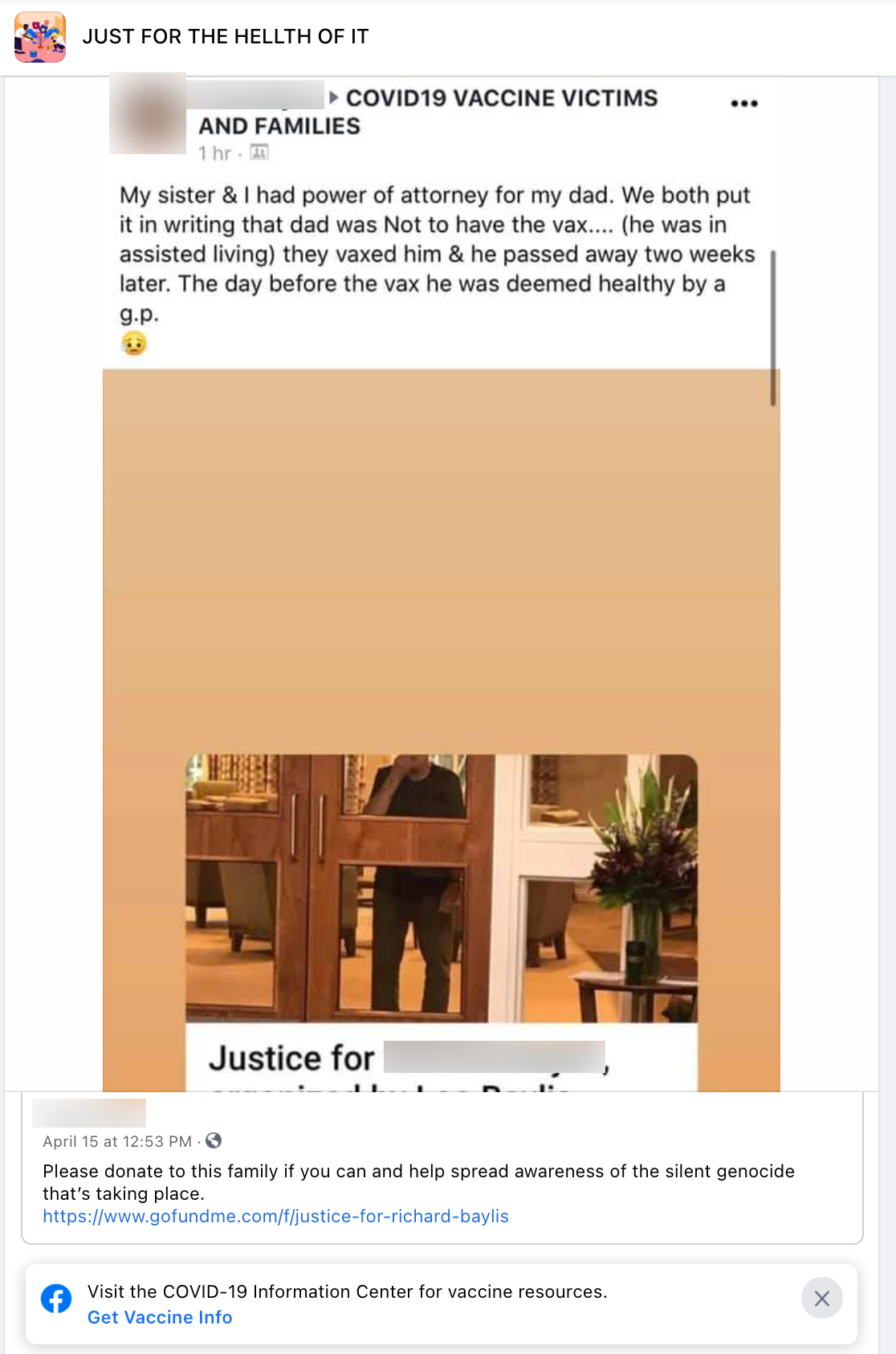 Facebook relies on the idea that things will inevitably slip through the cracks to excuse its weak moderation efforts. Vice president of integrity Guy Rosen ended a March blog post about misinformation by noting that Facebook’s “enforcement will never be perfect” and that “nobody can eliminate misinformation from the internet entirely.” However, as this example shows, Facebook groups are frequently not relying on subtlety when broadcasting to followers where to find anti-vaccine misinformation — on the platform and off. Anti-vaccine misinformation on Facebook is not buried, and the way anti-vaccine advocates evade moderation is not a secret. Facebook’s poor content moderation is inexcusable, and although the removal of one larger group is a good first step, this latest lackluster effort is not a replacement for sufficient moderation.