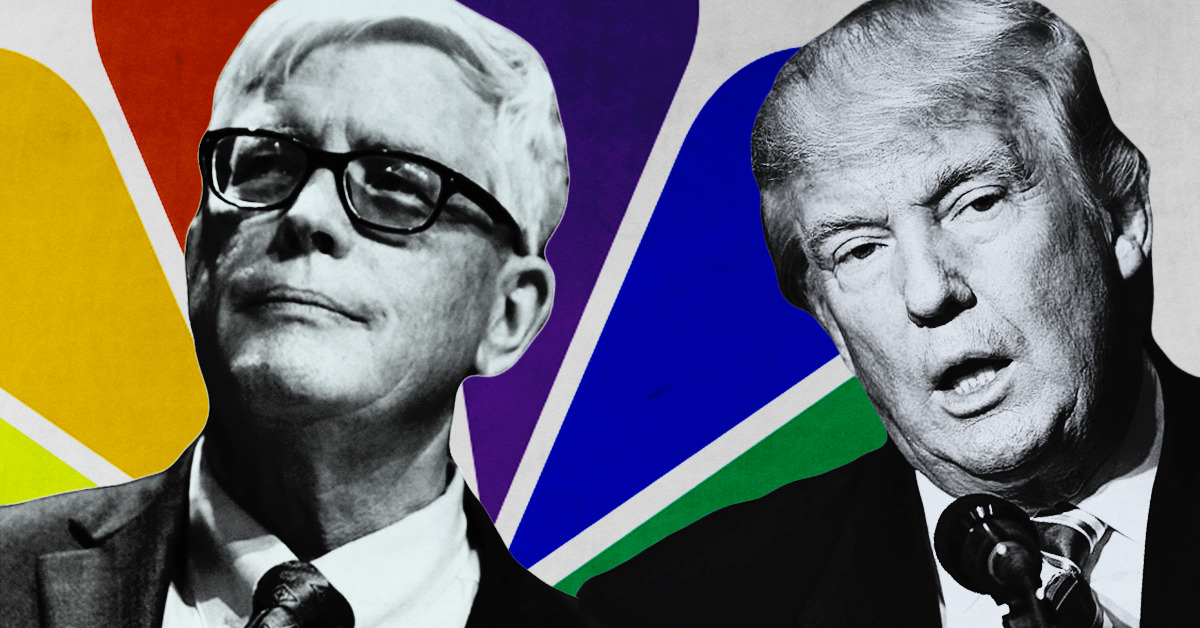 If there is one thing that stands out about MSNBC contributor Hugh Hewitt’s brand it’s that he is desperate to be taken seriously as a conservative intellectual. But if that’s true, why did he tweet this clumsy attempt to gaslight people over what happened at President Donald Trump’s fascist rally last night?

Good for @realDonaldTrump. The chant has no place at any @GOP rally, meeting or on any conservative broadcast. Blast away at policies and outrageous ideologies. Crowds/audiences/callers should never stoop to this rhetoric of nativism. https://t.co/KjvRwXlvlf

Hewitt’s acceptance and praise of Trump’s explanation is laughable. To see why, you just need to watch video of Trump’s July 17 rally in Greenville, NC, where Trump attacked Rep. Ilhan Omar (D-MN) -- one of four Democratic congresswomen he had singled out for a racist rant over the weekend. As Trump spoke, many in the crowd started to chant, “Send her back.” But instead of stopping the chant, Trump paused his remarks and let the chant build for 13 agonizing seconds, before simply moving on with his remarks, still attacking Omar:

“Send her back” chant breaks out at the Trump rally when he talks about Omar pic.twitter.com/JFZHc7eaOc

Today, Trump told the press he disapproved of the chant and even that he tried to stop it, an obvious lie contradicted by video footage of the incident (and one that should cause some tongue twisting at Fox News, where pundits had scrambled to defend the outburst).

Despite Hewitt’s reputation for seriousness -- he is a contributor to NBC’s Meet the Press and a Washington Post contributing columnist -- his tweet is par for the course for him. As my Media Matters colleague Matt Gertz wrote in a June 2017 article that chronicled softball interviews Hewitt has given Trump on his radio show, Hewitt is actually no different from Trump propagandists Sean Hannity or Rush Limbaugh. Instead of being bombastic and purposefully outrageous like those right-wing pundits, “he simply puts an intellectual gloss on their same brand of partisan hackery.”

As Gertz documented, Hewitt has actually been incredibly useful to Trump, stepping in to defend him when the president is at his most unhinged:

In recent weeks, while pundits who share Hewitt's reputation for erudition have castigated the president as dangerously unlearned and incurious, Hewitt has instead stood alongside the president's media sycophants, laying down cover fire for Trump. Hewitt supported Trump's firing of FBI Director James Comey, who was investigating his campaign's connections to the Russian government; he downplayed reports that Trump had revealed highly classified information in a meeting with Russian officials; after numerous outlets reported that Comey had kept notes of a meeting with Trump in which the president suggested he halt an investigation into a Trump aide, Hewitt's focus was on whether Comey, not Trump, had behaved appropriately.

Despite his calm and moderate facade, Hewitt has connections to far-right extreme rhetoric. He is a close friend of far-right pundit Kurt Schlichter. As documented in The Bulwark, Schlichter is the author of a racist novel series that imagines a second civil war in the United States where the U.S. government deputizes Black people on government assistance to violently persecute white conservatives. (Importantly, Schlichter has written that he sees his novels not merely for entertainment but as an actual premonition of what he thinks will happen in the U.S.) The series contains a number of direct parallels to The Turner Diaries, an infamous white nationalist novel that inspired Timothy McVeigh to bomb a federal building. In a laudatory blurb for these novels, Hewitt wrote, “Schlichter puts a whole flight of Black Swans in the air --each of them plausible-- and the result is a riveting, page-turner, and a demand from Schlichter for...more.” What’s more, Hewitt has allowed Schlichter to guest host his Salem Radio Network show nine times this year, and in some instances Schlichter has used the spots to promote his book series.