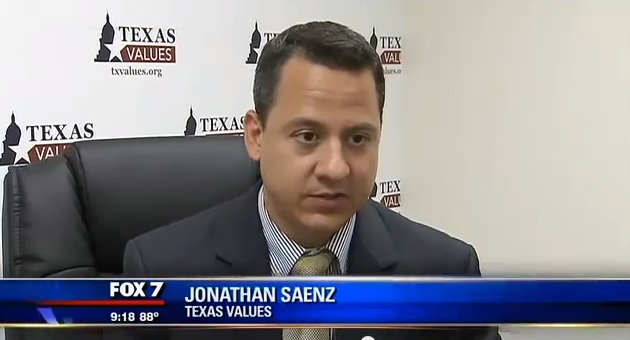 Texas Values president Jonathan Saenz agreed with a right-wing radio host that gay activists are trying to put Christians in concentration camps, asserting that the gay rights movement wants “to put people in jail” if they disagree with marriage equality and “the homosexual lifestyle.”

In a June 20 interview with Raging Elephants Radio, Saenz condemned a recent Colorado Civil Rights Commission ruling affirming that a Denver-area baker had violated the state's non-discrimination law by refusing to bake a cake for a same-sex couple. Host Claver Kamau-Imani asked Saenz whether the ruling was tantamount to sending the baker to a “concentration camp.” Saenz agreed, asserting that there's “no question” gay rights supporters ultimately aim to imprison opponents of LGBT equality:

KANAU-IMANI: Alright, let's get back to Colorado. So you have a baker that does wedding cakes and they say they don't want to do a two-man wedding cake or a two-woman wedding cake with the little figurines on top or whatever. And so the homosexual couple, whether it's man and man, woman and woman, whatever, they go to this specially created commission to deal with this, file a complaint against the business, and so the commission says 'No, you're gonna make this cake, plus, you're going to go to concentration camp,' essentially. Is that what you're telling us, Jonathan?

SAENZ: That's right, that's right. You know, they tried to do something like that here in Texas - I think it was a bill by Sen. Rodney Ellis that dealt with hate crime stuff, where they would've forced you to participate in an event of the quote-unquote community that you had offended. And so we testified against this legislation and it ended up dying on the Senate side. But I mean, this is what they want. I mean, there's no question. I've seen it. I've seen them try to do it with legislation here in Texas at the state level. It is a goal of theirs to put people in jail that disagree with homosexual marriage, without question - or the homosexual lifestyle. [emphasis added]

This isn't the first time Saenz has resorted to extreme rhetoric to attack LGBT equality. A prominent opponent of local efforts to combat anti-LGBT discrimination in Texas, Saenz has also predicted "polygamy and polyandry" and marriage between step-parents and step-children as a result of marriage equality. A vocal proponent of discredited "ex-gay" therapy programs, his solution to the problem that gay people exist is telling them that "it's never too late" for them to “change.”

As the debate over LGBT rights in Texas intensifies, Saenz's latest remarks and his history of inflammatory rhetoric underscore why media outlets shouldn't take him seriously.