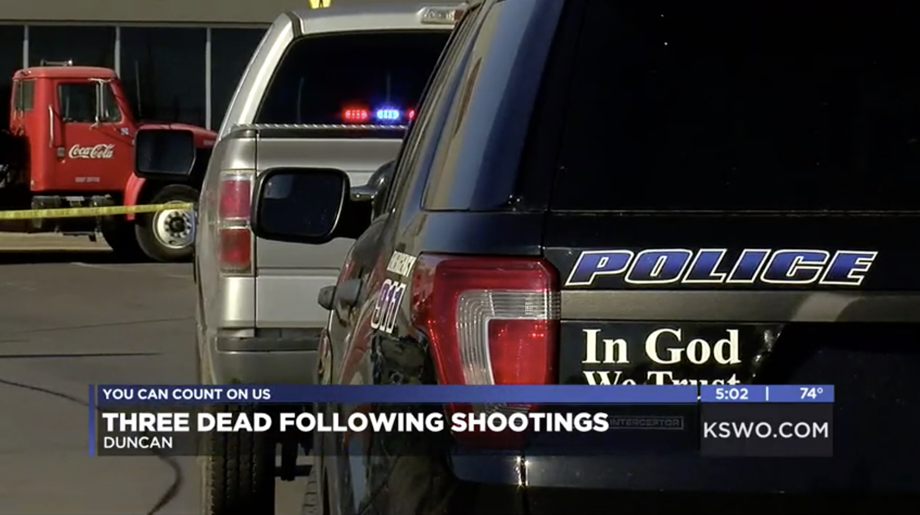 Following a domestic violence shooting in the parking lot of an Oklahoma Walmart, some pro-gun media figures ran with an unsubtantiated report to claim that the shooting was stopped by a person carrying a firearm who confronted the gunman. That initial report was incorrect, according to local law enforcement. Pro-gun media often distort high-profile shooting incidents to support the false claims that gun ownership improves personal safety and that people with concealed carry permits are often effective deterents to mass shootings.

On November 18, a man fatally shot his estranged wife and her boyfriend in the parking lot of a Walmart in Duncan, Oklahoma, before killing himself with his weapon. Relying on the account of a witness to the shooting, a local news station reported that the gunman was confronted by someone with their own firearm, and that report was picked up by the Daily Mail and USA Today, whose accounts right-wing media then promoted.

In fact, when local police gave a press conference following the shooting, Duncan Police Chief Danny Ford said of the initial report about intervention by an armed bystander, “We can’t confirm any of that.” ABC7 News reported that during a follow-up press conference on November 19, local law enforcement said “a man seen by witnesses nearby with a gun approached the scene after the shooting had ended but did not confront” the gunman. Duncan Police also indicated that they were “initially distracted” by the person who drew their weapon after the shooting took place.

But the initial erroneous report, which had never been confirmed by law enforcement, had already been promoted by prominent members of pro-gun conservative media. Former National Rifle Association spokesperson and current conservative radio host Dana Loesch wrote on Twitter that the gunman was “confronted by an armed citizen,” citing the Daily Mail.

Loesch had run with a similar false report in March to claim that the mass shootings carried out at two mosques in Christchurch, New Zealand, were stopped by an armed citizen.

His organization, Crime Prevention Research Center, falsely claimed that the bystander with a firearm, who did not actually approach the scene until the shooting was over, had stopped a mass shooting:

An article at the far-right website Breitbart.com claimed that the shooting was “cut short by an armed citizen who confronted the gunman.” Pro-gun blog The Truth About Guns similarly claimed that an “armed citizen confronted Walmart shooter, ending the attack.” Pro-gun group Gun Owners of America also pushed the initial inaccurate report.