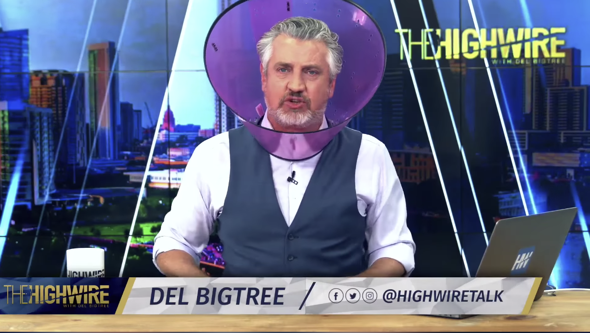 Broadcast and streaming platform Roku has added an online show from anti-vaccine activist Del Bigtree, who has repeatedly encouraged people to intentionally contract COVID-19. The program is listed as “educational” by Roku. In late July, YouTube removed Bigtree’s The HighWire channel for violating the platform’s policies after Media Matters reported on Bigtree using YouTube to spread dangerous medical misinformation.

During The HighWire’s latest broadcast, which aired on August 27 on Roku and also on his other biggest streaming platform, Facebook, he again argued that people should seek to contract COVID-19 in order to build natural herd immunity, a course of action that would lead to millions of deaths in the U.S.

Bigtree, who has no medical credentials, is a leading figure in the anti-vaccination movement through his anti-vaccine nonprofit organization Informed Consent Action Network and as the host of The HighWire, which is broadcast on Thursdays. A 2019 profile of Bigtree in the online parenting magazine Fatherly labeled him “dangerous” and said he “may be the most connected node in the anti-vaccine activist network.”

On August 19, The HighWire’s Twitter account teased the show’s “brand new ROKU Channel.” In an August 27 email to supporters, Bigtree wrote that following the YouTube ban, “we have started establishing relationships with companies who share in our vision of providing a new space for you to get real news, real science, transparent, and uncensored” and as part of that effort “we’ve also launched The HighWire on Roku!” Roku prohibits channel owners from publishing content that “place[s] individuals or groups in imminent harm” or material found to “contain false, irrelevant or misleading information.”

Bigtree's Roku channel offers episodes dating back to July 30. During the July 30 broadcast, which was largely about his channel being banned from YouTube, Bigtree defended his claim that people should “catch this cold” by intentionally contracting COVID-19 “to create herd immunity” and said it was “incredible” that he was able to continue to broadcast live on Facebook.

In contrast to YouTube’s outright ban of Bigtree’s channel, Facebook -- where Bigtree has over 348,000 followers -- has taken a more piecemeal approach to containing his promotion of conspiracy theories and dangerous medical misinformation. Following Media Matters' reporting, Facebook removed some videos where Bigtree made dangerous claims, but not others that contained similar dangerous claims. Facebook applied a fact-checking label to his August 27 broadcast -- to note that Bigtree’s suggestion that the novel coronavirus was manmade is a conspiracy theory -- but took no action regarding the dangerous claims he made during the broadcast that people should intentionally contract COVID-19 to build natural herd immunity.

During that broadcast, which is available on Bigtree’s new Roku channel, Bigtree argued that Americans should be willing to assume the same level of risk of dying of COVID-19 as we would if “China was attacking our borders.” Along those lines, Bigtree said, “I assure you, we would risk the lives of millions.” Bigtree then argued that the maximum number of Americans who could die from COVID-19 was “just nearing 200,000 total casualties, people who most likely were probably going to die this year anyway.” In fact, more than 183,000 Americans already have died of COVID-19 (and the actual death toll, based on total excess deaths, is even higher) and there is no end in sight to hundreds of Americans dying of the disease each day.

Bigtree expanded on this concept later in the show, promoting the notion that people should be contracting COVID-19 so we can “get to herd immunity. Let’s move on so that we can save the economy, something that we have been talking about for a very long time here on The HighWire.” Bigtree argued that an added benefit to achieving natural herd immunity would be that hospitals would not be overwhelmed by COVID-19 testing responsibilities. In fact, if Bigtree’s natural herd immunity plan were to be followed, millions of Americans could die, and one of the deadly factors would be hospitals overwhelmed by COVID-19 patients to the point where care could not be provided. Bigtree went on to dangerously and falsely compare COVID-19 to the common cold and said, “We’re going to have to let people get this illness, or stay locked down, which should be two or three years if you want a safe vaccine. So what are we going to do, just destroy the world as we know it?” During the segment, Bigtree also falsely claimed wearing a mask does not help prevent the spread of COVID-19 and falsely claimed that Sweden “has already got herd immunity.” (In fact, the country does not have herd immunity and its lax coronavirus guidelines led to worse outcomes in terms of deaths and damage to the economy compared to neighboring countries.)

Later in the August 27 broadcast, Bigtree hosted David Martin, who was featured in the conspiracy theory film Plandemic. Facebook banned the sharing of that film, though Martin promoted its central claims during his appearance.

Bigtree’s new Roku channel is not the first content on the platform created by individuals involved in both anti-vaccine advocacy and coronavirus denial; in August, Gizmodo UK identified several other anti-vaccine Roku channels that push dangerous coronavirus medical misinformation. Roku has also allowed QAnon conspiracy theorists to use its platform, in some cases taking action against the content, but in other cases allowing it to remain on the platform.