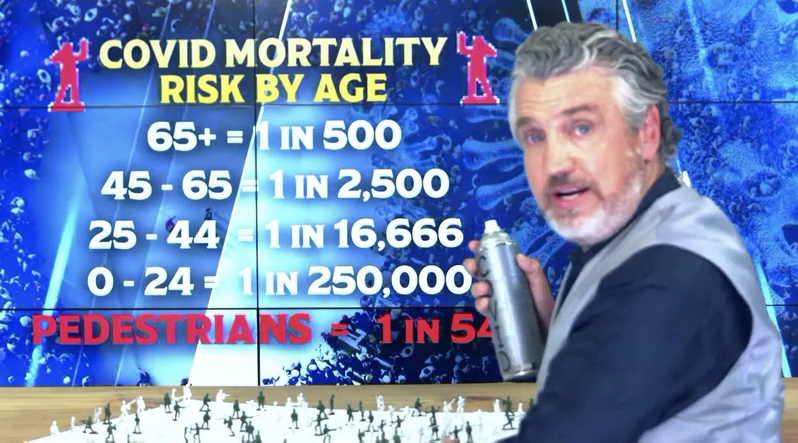 Prominent anti-vaccination figure Del Bigtree is using his online show -- which is broadcast on YouTube and Facebook -- to encourage his viewers to contract COVID-19 so that herd immunity can be established through natural spread of the disease rather than through use of a vaccine.

According to the Mayo Clinic, “there are some major problems with relying on community infection to create herd immunity” including that “it isn't yet clear if infection with the COVID-19 virus makes a person immune to future infection” and that if large numbers of people become infected at the same time, “the health care system could quickly become overwhelmed,” which “could also lead to serious complications and millions of deaths, especially among older people and those who have chronic conditions.”

Bigtree, who has no medical credentials, is a leading figure in the anti-vaccination movement through his anti-vaccine nonprofit organization Informed Consent Action Network and as the host of The HighWire, which is broadcast on Thursdays. A 2019 profile of Bigtree in the online parenting magazine Fatherly labeled him “dangerous” and said he “may be the most connected node in the anti-vaccine activist network.”

On July 23, Media Matters reported on dangerous coronavirus-related medical misinformation that appeared on The HighWire in recent months, including Bigtree’s claim that COVID-19 is “one of the most mild illnesses there is,” his repeated exhortations to his viewers to infect themselves with COVID-19, his false claim that wearing a mask poses a serious health risk, and his promotion of guests who recommended that people who think they have COVID-19 take vitamin C until they have diarrhea. Media Matters asked YouTube and Facebook for comment on whether Bigtree’s claims violated their respective policies against dangerous medical misinformation, but neither platform responded. Several of Bigtree’s videos highlighted by Media Matters’ reporting were subsequently removed from Facebook, but other videos pushing similar dangerous medical misinformation were left up.

Bigtree made his pro-infection pitch with a demonstration where he spray-painted plastic figurines from a can labeled “COVID-19” in order to show how herd immunity could be established through natural infection. Bigtree falsely said that COVID-19 is “just another cold” and said without evidence that “between 60 and 80%” of Americans “already have immunity because it's in the exact same family as the cold they had last year or two to five years ago.” Therefore -- according to Bigtree -- “the bar for herd immunity is so low. We only need 20% to get involved with this cold, this infection, in order to reach herd immunity.” To viewers who might express fear of dying while participating in Bigtree’s plan, he said, “Many of us have not accepted the fact that a part of life actually is death.”

Besides the risk of death from contracting a disease which has already killed more than 140,000 people in the U.S., there are other negative consequences associated with having COVID-19, including the potential for serious long-term health problems such as damage to the heart and lungs. Additionally, people who contract COVID-19 and suffer only a “mild” case could still spread the disease to others who are more vulnerable.

But later during the broadcast, Bigtree sought to downplay the risks associated with COVID-19 by using mortality figures that he purported to calculate himself to show that contracting the disease is “as safe as walking down the street.”

Bigtree said that he would not encourage -- or discourage -- people over the age of 65 from intentionally contracting COVID-19, saying he doesn’t “want to seem heartless.” Bigtree then said “the rest of these people” -- referring to people below the age of 65 -- “are going to have to do their job. Right? They’re going to have to take the risk, which is less than walking down the street.”

Bigtree then spray-painted more plastic figures with “COVID-19” and said: “Mission accomplished. Job is done. We have done it. The exit strategy is upon us.” Bigtree warned that if his plan isn’t followed, “we are going to have no United States of America as we know it” and China will take over the world “because you thought it was a better idea to wear your mask and hide from the virus when all we needed was people to take a risk less than walking down the street to get us to herd immunity.”

Bigtree claimed that what medical authorities are “trying to do is keep us from establishing herd immunity” because they “want to sell you a vaccine that will never ever be here in time” and that “will be totally dangerous or at least never proven to be safe.” In fact, coronavirus vaccines must go through rigorous safety trials in order to be approved for use.

Bigtree has often used his show to criticize mask-wearing, falsely claiming that wearing a mask does not help prevent the spread of COVID-19 and poses a serious health risk. During his July 23 broadcast, Bigtree offered an alternate theory, arguing that if masks do work, that is actually bad because it would interfere with his herd immunity plan by preventing the spread of infections.

Bigtree’s previous broadcast of The HighWire also included dangerous medical misinformation. During the July 16 edition, Bigtree hosted a guest who theorized that the novel coronavirus does not actually exist and deaths attributed to the disease are actually from some other cause. YouTube’s COVID-19 medical misinformation policy theoretically bans content that “claims that COVID-19 doesn’t exist.”