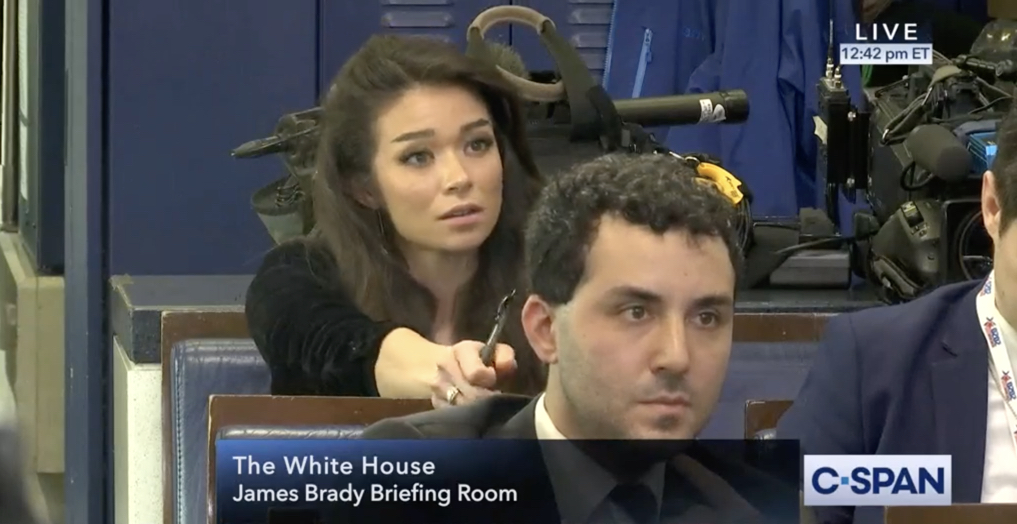 Chanel Rion, the White House correspondent for the pro-Trump cable outlet One America News, is now calling the claim that COVID-19 originated in the U.S. a “notably odd accusation” from the Chinese Communist Party. However, just a few days ago, Rion suggested in an OAN special that COVID-19 was created at a lab in North Carolina in 2015.

Rion was the host of an OAN special that aired on March 14 and 15 called Exposing China's Coronavirus: The Fears, The Lies and The Unknown. In the special, which also featured former top Trump administration officials, Rion said that there were some “interesting clues right here in the U.S.” about the potential origin of COVID-19, before pointing to a laboratory in North Carolina. She cited a “citizen investigator” -- who is also a QAnon conspiracy theorist -- who Rion said “raises intriguing connections linking the Wuhan coronavirus to a biosafety level three lab in North Carolina.” (The special purported to show a picture of the “citizen investigator,” but instead showed his Twitter profile picture of a character from the 1968 film 2001: A Space Odyssey.) Rion went on to suggest that the virus was smuggled overseas by Chinese lab workers and then released in Wuhan, China.

Days later, during a March 18 broadcast from outside the White House, Rion changed her tune during an attempt to defend Secretary of State Mike Pompeo over his efforts to inject racism into the coronavirus discussion. Rion said, “Secretary Pompeo previously used the term ‘Wuhan coronavirus,’ to which the Chinese Communist Party, the state-controlled media, and top Chinese officials in the foreign ministry and elsewhere have sternly objected to, arguing that the virus may have come from the U.S. -- a notably odd accusation.” At no point did Rion acknowledge that she had pushed similar claims on air herself.

Rion concluded her report by claiming that “to date, OAN has been the only national network to ask the president about the implications of China’s accusations towards the U.S. here.” She continued, “Other outlets covering the White House have shown a singular tendency to side with the Chinese Communist Party on this issue in expressing their unhappiness with the term,” referring to Trump being challenged over his use of the term “Chinese virus.”

Rion’s attacks on the press covering coronavirus have now been featured in the White House briefing room. During a March 19 coronavirus task force update, Rion asked Trump about his use of the term “Chinese virus,” asking, “Is it alarming that major media players, just to oppose you, are consistently siding with foreign state propaganda, Islamic radicals, and Latin gangs and cartels?”

Trump responded by attacking the press and saying, “It's more than fake news -- it's corrupt news.”

Prior to joining OAN in May 2019, Rion worked as a pro-Trump editorial cartoonist whose illustrations promoted anti-Muslim bigotry; Seth Rich conspiracy theories; the book of a virulent anti-Semite; and a call for “armed citizens” to defend the country against purported coups and assassination attempts by the “violent left.”