After the United States military carried out a drone strike at the behest of President Donald Trump that killed Maj. Gen. Qassem Soleimani, a key Iranian military figure, major mainstream news outlets unquestionably repeated the Trump administration’s purported justification for the attack in their headlines.

Soleimani was killed while traveling in a convoy near the Baghdad International Airport on January 2 in a move that will have widespread repercussions throughout the Middle East, including the possibility of outright war with Iran. On January 3, Secretary of State Mike Pompeo posted on Twitter an overarching justification for the strike, saying it warded off “imminent threats to American lives.” Later, on CNN, Pompeo refused to disclose what those imminent threats were when asked about the statement.

Having apparently learned no lessons from the buildup to the Iraq War, when mainstream media outlets helped build a drumbeat for the war on the basis of false claims from the George W. Bush administration, major news outlets uncritically repeated Pompeo’s claim -- even though he and the administration he works for lack credibility and are already offering mixed public justifications for why the strike took place.

Mainstream outlets routinely repeat claims from the Trump administration without context or skepticism. This latest round of uncritical headlines follows a major revelation last month, which was largely ignored by network news, that the U.S. government systematically spread false public information about the state of the war in Afghanistan.

Here is how some major news outlets framed the Trump administration’s claims: 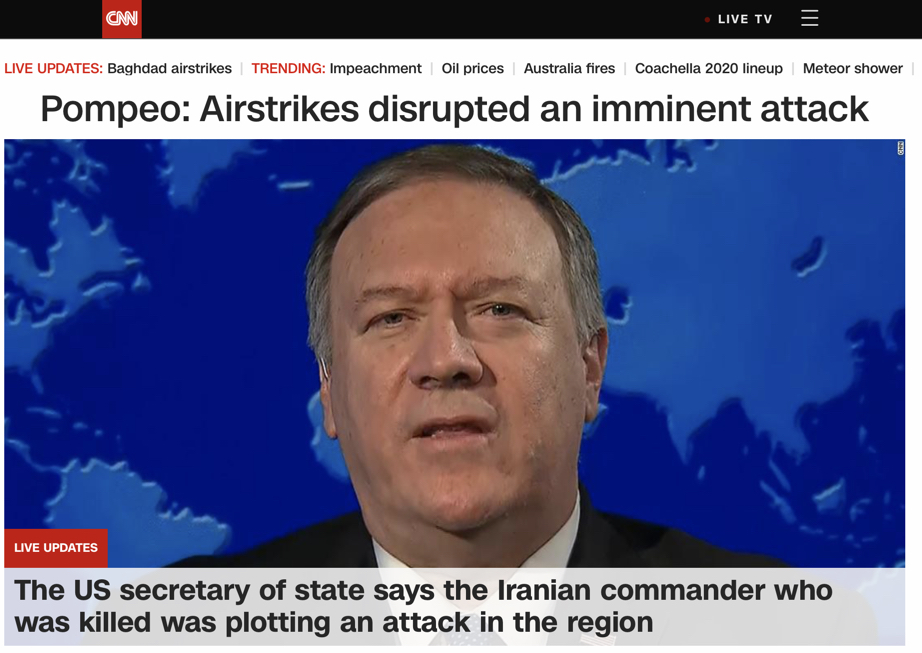 Reuters via The New York Times: