Following a pernicious right-wing media pattern, The Washington Examiner is trying to knock down Democrats' popularity by pretending that only the views of white people matter. The Examiner headlined a piece by Michael Barone:

Under Obama, Millennials move into the GOP column

But if you look at the text of Barone's piece, it's clear that while white non-Hispanic millennials are supporting the GOP, this is not true of all groups:

Now Pew Research has come out has come out with figures for 2011. They're not good news for Barack Obama and the Democrats.

The Democratic party identification edge has been reduced to 47 to 43 percent. That's a 4-point drop for Democrats and a 4-point rise for Republicans since 2008.

The Pew analysts note, as if they were analyzing a growth stock, that the Republicans' numbers haven't improved since 2010. But the 2010 numbers yielded a 52 to 45 percent Republican lead in the popular vote for the House.

If -- and it's always a big if -- Republicans can maintain that standing in party identification, they should be in fine shape in November 2012, even with increased presidential year turnout.

It's interesting to see which groups have moved most in party identification.

As the Pew analysts note, there has been little change among blacks, who are overwhelmingly Democratic. Hispanics come in at 64 to 22 percent Democratic, somewhat better for the president's party than last year, when they voted 60 to 38 percent Democratic in House elections.

The most noteworthy movement among whites has been among voters under 30, the so-called Millennial generation. Millennials voted 66 to 32 percent for Barack Obama in 2008 and identified as Democrats rather than Republicans by a 60 to 32 percent margin.

It gets even worse when you look at the the Pew survey this article cites. When you actually count all millennials -- not just the white ones -- Democrats still maintain a 13-point lead.

If this all sounds vaguely familiar, it's because conservative media figures have a nasty habit of trying to make Obama look less popular than he is by pretending only white poll respondents count. The worst thing about that isn't the inaccurate numbers that result: it's the ugly implication that non-white voters don't matter, or matter less.

Of course, Fox Nation is all about ugly implications. Leave it to them to broadcast the Washington Examiner's misinformation as fact: 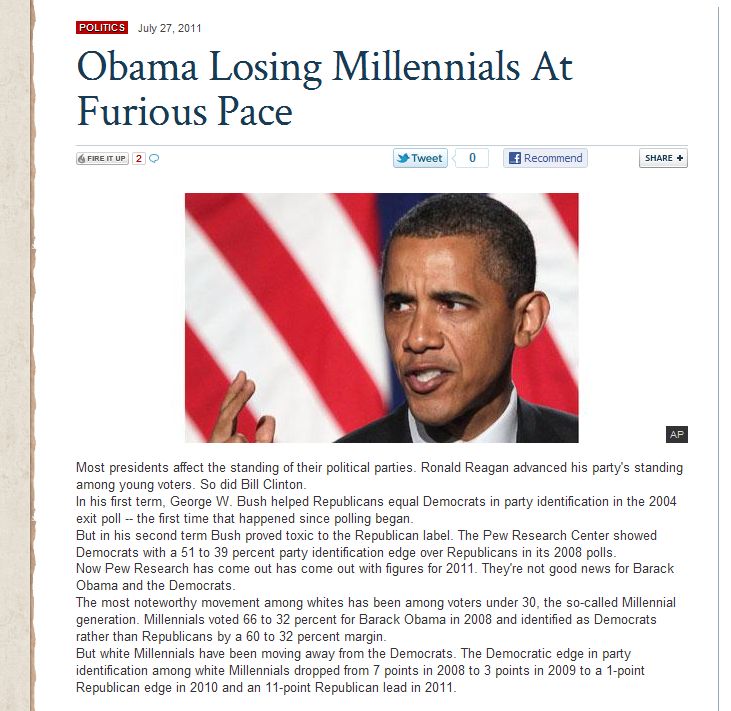