The overall premise that undocumented immigrants are more dangerous than those born in the United States is also false. The New York Times reported that “several studies, over many years, have concluded that immigrants are less likely to commit crimes than people born in the United States. And experts say the available evidence does not support the idea that undocumented immigrants commit a disproportionate share of crime.”

As with much of the fake information passed around the internet, it’s difficult to track the origins of the “most wanted” claim. The number appears to have started appearing on the internet around spring 2006 and originally just included Los Angeles. In April 2007, The Arizona Republic reported that the statistic is wrong and part of a “widely circulated e-mail.” It has also appeared all over the internet, including on message boards and comment sections.

But the number’s spread has also been fueled by its appearance in media outlets in the past decade.

Variations of the “most wanted” claim have appeared in numerous conservative op-eds, including in national outlets like The Blaze (Jennifer Kerns), Infowars (Chuck Baldwin), Human Events and FrontPageMagazine.com (Don Feder), and Newsmax (Pat Boone, Jim Meyers, and Armstrong Williams). And it’s appeared in op-eds in local outlets such as the Sierra Vista Herald, West Hawaii Today, and Lexington Herald Leader, as well as in letters to the editor in papers in places like Arizona, Colorado, Nebraska, Oklahoma, Pennsylvania, and Tennessee.

The number also appeared in an August 24 Washington Examiner piece by conservative pundit Jennifer Kerns, who had previously used it in The Blaze. Kerns, who did not respond to a request for comment, worked on Fox News’ presidential debate coverage and for various Republican causes over the years.

Media Matters contacted the Examiner, which looked into the piece and found that it contained several statistics, including the “most wanted” number, that couldn’t be verified. The publication subsequently removed the offending paragraphs and added the following corrections note:

Corrections: The original version of this piece claimed that FBI statistics showed 95 percent of arrest warrants issued in Los Angeles are for illegal immigrants, that 75 percent percent of those on the “most wanted” list in Los Angeles, Phoenix, and Albuquerque, N.M. were illegal immigrants, and that 53 percent of burglaries in California, New Mexico, Nevada, Arizona, and Texas were committed by illegal aliens. None of those claims could be verified using FBI data.

The piece also claimed that a United Nations report found that 97 percent of illegal immigrants in the U.S. entered via the southern border. That report could not be located.

Kris Kobach’s use of the number in an October 24 Breitbart.com piece is perhaps the most notable given his influence on President Trump and today’s immigration debate. As the Brennan Center for Justice at New York University Law School noted, Kobach “has been a key architect behind many of the nation’s anti-voter and anti-immigration policies,” including “Arizona’s controversial 2010 ‘show me your papers’ law,” and serves as an advisor to President Donald Trump and as the vice chair of the so-called Presidential Commission on Election Integrity.

Kobach sourced the statistic to a 2013 ConstitutionParty.com piece by Peter B. Gemma; the Southern Poverty Law Center wrote that Gemma is a white nationalist who has reportedly been “part of the American Holocaust denial movement.”

Kobach's piece -- which has gone uncorrected despite inquires to his office and Breitbart.com -- unfortunately indicates that the zombie statistic will live on. On its Facebook page, Breitbart used Kobach’s column to create the following “fact”: 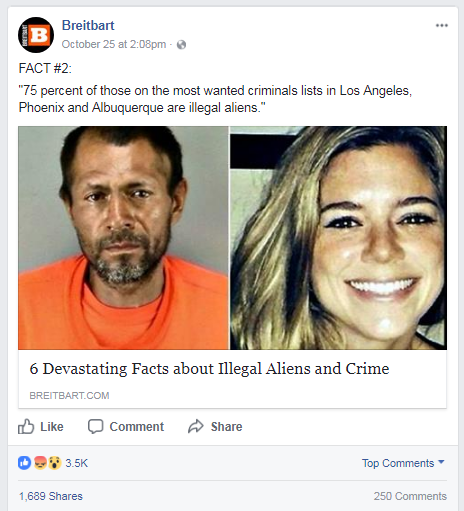