For months, Breitbart has used the work of an anonymously run Swedish website that illegally published questionable crime data in order to fearmonger about an alleged wave of crime and rape committed by immigrants. Even after the now-defunct website, which was also publishing journalists’ personal information, was reported to the Swedish authorities for illegally disseminating personal data, Breitbart continued to promote its findings.

Breitbart has promoted methodologically flawed findings from the now-defunct website, GangRapeSweden.com, several times over the past year, using the data to bolster its arguments about migrant crime. Gangrapesweden.com was an anonymously administered Swedish website that published detailed, sensitive records related to violent crimes, particularly rape, by over 83,000 individuals in Sweden between 2004 and 2014. The neo-Nazi site Nordfront took credit for delivering the data, which was allegedly verified and which purported to show a disproportionate level of crime by “non-Swedish” individuals. The site’s method for deciding whether a perpetrator was Swedish or non-Swedish was based solely on the individual’s name.

In addition to disclosing sensitive records linked to criminal offenses, GangRapeSweden.com played a role in a coordinated campaign to harass progressive Swedish journalists. In September, the website doxxed, or published names and personal contact information of, 14 members of Jagärhär, an anti-harassment website administered by Swedish journalists, leading to threats and racist and homophobic attacks on the site’s members. Sweden Democrats, Sweden’s far-right nationalist party with ties to neo-Nazism, promoted the campaign on a local chapter of its official Facebook page, but later deleted the post.

The site had been in operation since at least March 2017, but translated some of the content into English only recently. On December 1, it added additional information and made the information searchable. Three days later, a Swedish Holocaust-denier and pseudo-journalist who refers to himself as Peter Sweden drew attention to the posted records in a tweet, an image of which ended up on the message board 8chan’s “politically incorrect” board along with a suggestion that users “archive everything.” 8chan is notorious for its racist commentary and politically motivated harassment campaigns. 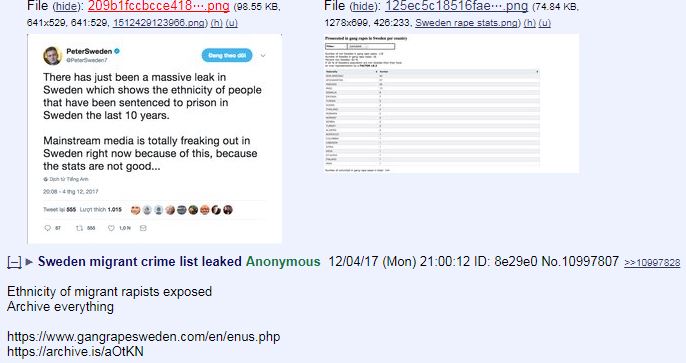 On December 4, GangRapeSweden.com was reported to Swedish authorities, who found the publication of such data to be in violation of Sweden’s Personal Data Act. The next day, the site was taken down. According to information provided by Martin Tunström, the president of independent Swedish NGO Juridik Fronten (Legal Front), it appears the site’s registry was located on a server in the United States, which would make its publication of records pertaining to Swedish citizens a crime. Tunström called GangRapeSweden.com’s actions “probably the most extensive crimes against the Personal Data Act that has occurred.”

Before its removal, GangRapeSweden.com touted Breitbart’s embrace of its work. The site promoted Breitbart content that cited its records and even had a subsection of its website (under “Artiklar,” Swedish for “articles”) dedicated to such Breitbart articles. In turn, Breitbart appears to be defending GangRapeSweden.com, implying in a December 5 post that the Swedish government’s potential move amounts to censorship and conflating LexBase, a controversial but legally licensed, Swedish subscription-based criminal and medical records database, with the illegally-published data made public by GangRapeSweden.com.

Breitbart has been a key driver in promoting anti-immigrant narratives about migrants and refugees in Sweden, claiming they are a drain on Sweden’s economy, blaming them for gang violence, and hyping fears of a so-called Muslim “invasion.” The website has also played up bigoted tropes about Muslims to portray them as violent and separatist and their cultural and religious values as irreconcilable with those of native Swedes. Breitbart regularly makes these claims based on biased sources, misrepresentations of news reports, and exaggerations of legitimate studies.

As Media Matters and others have documented, many influential far right websites, white nationalists, right-leaning tabloids and messageboards, and fake news websites have cultivated an obsession with the mythical violent crime wave in Sweden, posting content on the subject nearly every day. One of Breitbart’s favorite tropes has been to paint Muslim men as predisposed toward rape and sexual assault, a centuries-old tactic used to attack immigrants. It has also claimed the Swedish government and law enforcement dismiss and even excuse alleged rape committed by migrants and cover up an association between immigration and crime. Such claims are generally unsupported by evidence and contradicted by legitimate data.

Breitbart’s promotion of xenophobic content related to Sweden is nothing new; and Chris Tomlinson, the writer responsible for Breitbart’s content promoting GangRapeSweden.com, is also almost exclusively responsible for Breitbart’s content tag attacking Swedish multiculturalism. Now, Breitbart is, in essence, not only signaling its support for a website tied to neo-Nazis and Sweden’s far-right political party, but also undermining Sweden’s rule of law and tacitly promoting the harassment of journalists to serve political ends.