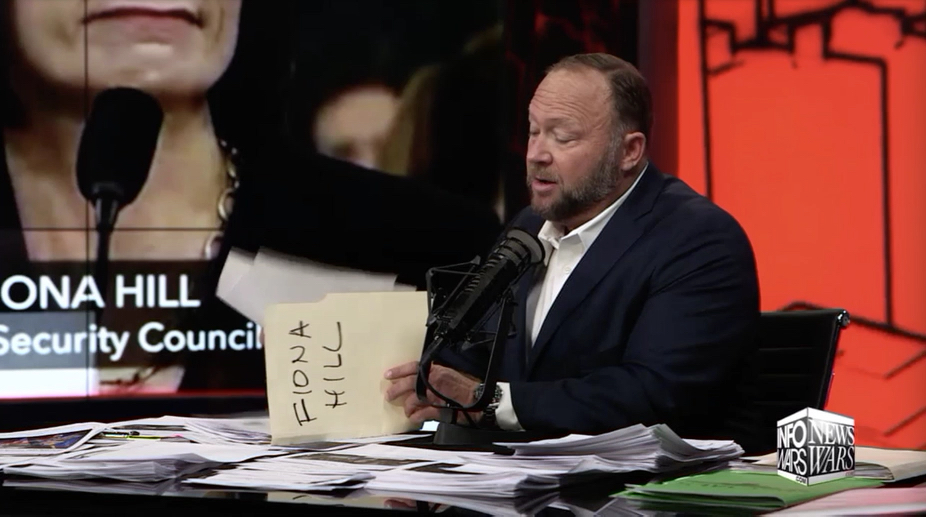 Far-right conspiracy theorist Alex Jones has continued to use his Infowars outlet to slime Fiona Hill, using derogatory language while making false accusations about the former National Security Council staffer who testified last week in the impeachment inquiry. Jones said that he was responding to Hill because his former Infowars colleague Roger Stone, who was recently convicted of seven felonies and is under a gag order while awaiting sentencing, cannot.

Jones and Stone began to smear Hill in May 2017, shortly after she joined the Trump administration, when Stone claimed Hill was a “mole” who was planted by financier and philanthropist George Soros. (Hill was previously an advisory board member to a pro-democracy group founded by Soros; there is absolutely no evidence Soros directed her to work at the White House.) Jones and Stone continued to attack Hill during her tenure in the White House, and in 2018, Stone bragged that Infowars had “first identified” Hill as a Soros-backed infiltrator. When it was announced on October 11 that Hill would testify as part of the impeachment inquiry into President Donald Trump, Infowars republished prior content attacking Hill.

During her closed-door testimony on October 14, Hill recounted that after the smear campaign started in 2017, she began to receive death threats and other forms of harassment, and she said that the harassment was ongoing. She was asked about Stone and Jones’ smear campaign against her during her public testimony on November 21, and in her response, she criticized Soros-related conspiracy theories as anti-Semitic, saying, “The trope against Mr. George Soros was also created for political purposes, and this is the new 'Protocols of The Elders of Zion,'” referring to an infamous book that fabricated records to suggest Jews were secretly plotting to control the world. Hill also provided damning testimony about Trump’s attempts to use U.S. foreign policy to fulfill a personal desire, saying that Ambassador to the European Union Gordon Sondland had been running a “domestic political errand” when he urged Ukraine to investigate Trump’s political rival Joe Biden.

Jones responded to Hill’s testimony during his November 22 episode with continued and escalating smears. While mentioning that Stone is under a gag order following his conviction on charges of lying to Congress and witness tampering, Jones said, “I’m simply pointing out that he can’t respond to her, and I can respond for Roger, so I will.” Jones then ranted about Hill for several minutes before saying, “So when we come back, we’re going to show you this lying, stinking Soros wart’s operations. And I want her ass indicted. I want her indicted for perjury. Today. Indict that whore.”

Later during his show, Jones said, “I want to apologize, not to Fiona Hill, but to prostitutes who are, in a lot of cases, you know, good, hard-working people,” before saying he meant Hill is a “globalist whore of Soros, a trafficker in evil.” Jones said, “When it comes to selling this country out, she whores herself out, she whores the world out. But she’s not an American, so what do you expect?” (Hill is a British-born American citizen.) Jones went on to claim, “Her system is about destroying nation-states, tearing cultures apart, and putting it back together in people like Soros’ architecture.”

Jones also responded to charges of anti-Semitism against him by pushing the smear that Soros “helped round up Jews” and was “killing them” during the Holocaust. He went on to attack White House staffer Lt. Col. Alexander Vindman, who also testified in the impeachment inquiry, by saying that Vindman “looks like a child molester to me.” He added, “If I was a Hollywood director and I was going to cast somebody, I would cast him as a sniveling, rat, mole, lying piece of crap. Like, Jew didn’t pop into my head.”

Jones previously claimed that Soros is the head of the “Jewish mafia” and later attacked “the Jewish press” for reporting on his initial claim. He has also claimed that many Ku Klux Klan members are “Jewish actors” who look like the “cast of Seinfeld” with their hoods off.