On July 14, President Donald Trump unleashed on American congresswomen of color in a racist thread of tweets. Some white supremacists and right-wing media figures quickly jumped to his defense.

Trump tweeted about “progressive” Democtratic congresswomen, writing that they “originally came from countries whose governments are a complete and total catastrophe, the worst, most corrupt and inept anywhere,” and saying that they should “go back and help fix the totally broken and crime infested places from which they came. Then come back and show us how it is done. … You can’t leave fast enough.” It’s widely inferred that Trump was addressing Rep. Alexandria Ocasio-Cortez (D-NY), Rep. Ilhan Omar (D-MN), Rep. Rashida Tlaib (D-MI), and Rep. Ayanna Pressley (D-MA). Trump went on to berate the lawmakers for “viciously telling the people of the United States, the greatest and most powerful Nation on earth, how our government is to be run.”

Many in mainstream media widely denounced Trump’s tweets as racist. The tweets were also factually inaccurate -- Ocasio-Cortez’s family is from Puerto Rico, which is part of the U.S., and she was born in the Bronx; Pressley is an African-American who was born in Cincinnati to parents who are also from Ohio; Tlaib was born to immigrant Palestinian parents in Detroit; and while Omar was born in Somalia, she became a U.S. citizen as a teenager.

The larger story here is not the factual inaccuracies, but that the president holds racist, distorted views about who is rightfully a U.S. citizen and who is not. Many Americans pointed out that being told to “go back” to some distant country, regardless of birthplace, is a familiar, ugly, racist trope.

Unsurprisingly, some white nationalists and right-wing media figures defended Trump’s comments. A few praised the comments, and others resorted to gaslighting, insisting that the media and Democrats were misquoting Trump. 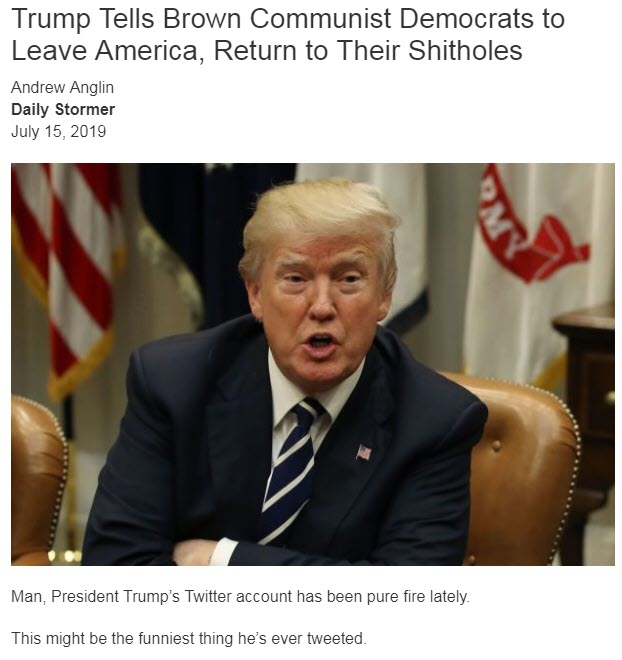 British neo-Nazi Mark Collett responded to British Prime Minister Theresa May's criticisms of Trump's comments, saying that May is a “total failure.” He added that “her latest display of virtue signalling won't do anything to improve her popularity.”

Far-right publication LifeZette reported on Ocasio-Cortez’s reaction to Trump’s tweets, calling her comments “pretty ugly” and “unbecoming … for an elected official of this country.” The publication detailed what it termed her “ad hominem attack” while reporting on what Trump said to illicit her response without any commentary. 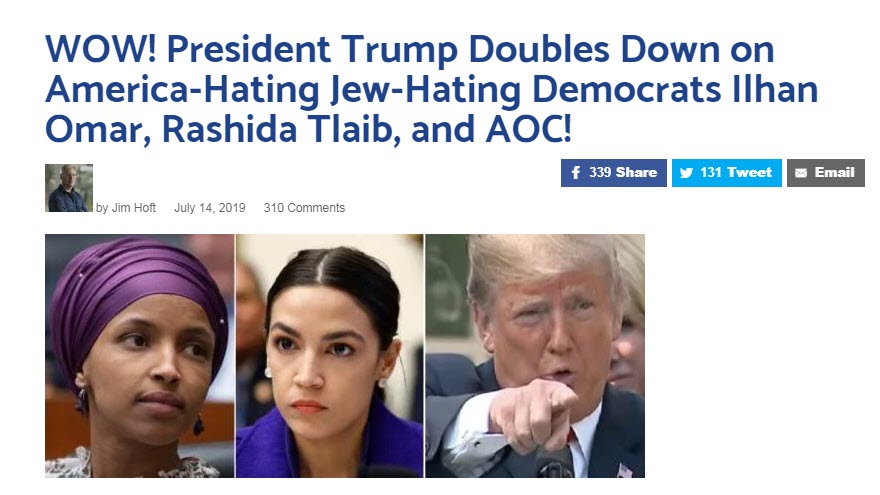 Conservative publication RedState claimed that Trump tweeted “what most of middle America is thinking.” The article elaborated that “middle America” is thinking that the congresswomen’s families “fled some third world hell hole that practices abuse of women—including genital mutilation – in order to come to these United States. …  Instead of continually badmouthing these United States, why don’t you and your family go back to the third world hole you came from and fix it.” The article praised Trump, saying, “Great Job, Mr. President. Keep putting these mindless twits in their place.”

White nationalist site VDARE responded to a tweet criticizing Republican's silence on Trump's comments by deflecting to a different story that they claim isn't getting adequate attention from Democrats.

Conservative commentator Bill Mitchell tweeted that Trump “told a bunch of whining progressives go to their corrupt home countries, fix their problems, THEN RETURN HERE AND SHOW US HOW IT'S DONE.” Mitchell expressed agitation that “the media conveniently leaves out the RETURN part, which was the point of the whole tweet.”

President Trump told a bunch of whining progressives go to their corrupt home countries, fix their problems, THEN RETURN HERE AND SHOW US HOW IT'S DONE. The media conveniently leaves out the RETURN part, which was the point of the whole tweet.

Breitbart’s John Nolte suggested that Trump’s tweets were not racist as they “did not mention race, or women of color or tell anyone to go home.” He added that Trump told “these idiots to ‘come back’ after showing how it's done” and media are just “fool[ing] people into believing things that are simply not true.”

Fox Nation hosts Diamond and Silk said, “The media should report the whole quote not a few words from the beginning and ending.” The pro-Trump pair concluded their tweet with “#FakeNewsMedia.”

Pro-Trump One America News Network’s Emerald Robinson complained that “the American media will spend the whole day declaring that Americans are racists because they don't want ISIS and Hezbollah and Hamas and Al Qaeda supporters living in America.” Robinson concluded, “This will guarantee Trump's re-election in 2020.”

The American media will spend the whole day declaring that Americans are racists because they don't want ISIS and Hezbollah and Hamas and Al Qaeda supporters living in America. This will guarantee Trump's re-election in 2020.

Washington Examiner’s Quin Hillyer claimed that though he thinks “Trump IS a racist,” his tweets in this case “were obnoxious withOUT being necessarily racist.” He insisted that people getting upset over Trump’s comments are “causing a backlash that works in Trump's favor,” advising “CNN, & others” to “can it!”

Fox contributor Newt Gingrich insisted that Trump’s tweets are a “good political move.” He elaborated that “the more [Trump] can get the country to look at” these four congresswomen, “the more he can get” Americans “to realize how radical they are and how fundamentally anti-American their views are.”

TownHall’s Kurt Schlichter claimed that people who were “paying attention ... thought he had a point about the anti-American ingratitude of the people now running the Democrat Party.”

Trump’s tweet today was a huge deal to libs and ahoys 🛳 on Twitter. To the extent anyone else was paying attention, they thought he had a point about the anti-American ingratitude of the people now running the Democrat Party.

Fox News senior political analyst Brit Hume conceded that Trump’s comments were “nativist, xenophobic, [counterfactual], and politically stupid,” but he insisted that “they simply do not meet the standard definition of racist.” Hume claimed that the word “racist” is “so recklessly flung around these days that its actual meaning is being lost.”