Last week, Instagram and its parent company, Facebook, started implementing new content policies purporting to ban praise for white nationalism and white separatism on the social media sites. According to reporting from Motherboard, Facebook’s focuses on explicit mentions, not content which features “implicit and coded white nationalism and white separatism.” The narrow focus of Facebook’s policy has thus resulted in a failure to remove a large amount of extremist content, and while the platform has continued to fine-tune the enforcement of its policy following reports of its ineffectiveness, many extremists might still be able to skirt the rule by simply not using explicit labels while pushing white nationalist and separatist talking points.

As it stands, Facebook and Instagram’s ban on white supremacy and separatism is a policy designed to fail. Last week, Media Matters published a noncomprehensive list of Facebook pages which are affiliated with prominent white supremacist figures and/or push white supremacist content. Of the 43 pages flagged, only three were taken down following the implementation Facebook’s new policy.

And as other tech platforms have come under increasing scrutiny for their complicity in the spread of disinformation, conspiracy theories, and extremist content, Instagram-- which has mostly evaded criticism -- has become a hub for far-right memes and videos. Many of the Instagram handles linked to white supremacy that we reviewed have seen drastic increases in followers over the past nine months, as well as video view increases.

Laura Loomer (@loomered), who was banned from Twitter for making anti-Muslim attacks against Rep. Ilhan Omar (D-MN), has turned to Instagram to push the same bigoted misinformation. In one post, Loomer called Omar a “hate crime hoax expert” and claimed that she had faked bomb threats made against her. In other posts, Loomer has falsely labeled Omar as “pro sharia law”; claimed that Vogue supported “terrorism and Jew hatred” because the magazine put Omar on a cover; and wrote that Omar’s “lifestyle is bankrolled by Arabs who only have a loyalty to Islam.”

Loomer’s anti-Muslim, white nationalist Instagram content extends beyond bigoted attacks on Omar. One day after the mosque shootings in Christchurch, New Zealand, where 49 people were killed by a white supremacist, Loomer published three posts downplaying the anti-Muslim terrorist attack. In the first post, while also referencing smears against Omar, Loomer stated: “The media makes so many excuses for anti-Semitism but then they want us to care about certain groups of people more than others.” In the second, Loomer came after the media again for covering the Christchurch terror attack while allegedly ignoring Christians “murdered by jihadists.” And in the third post, Loomer wrote: “How come the New Zealand mosque shooting video is available online, but pictures from inside Bataclan theatre in paris are not … ? ... Never forget these innocent people in Paris who were so selfishly murdered simply because they were Westerners.” Loomer has over 111,000 followers. 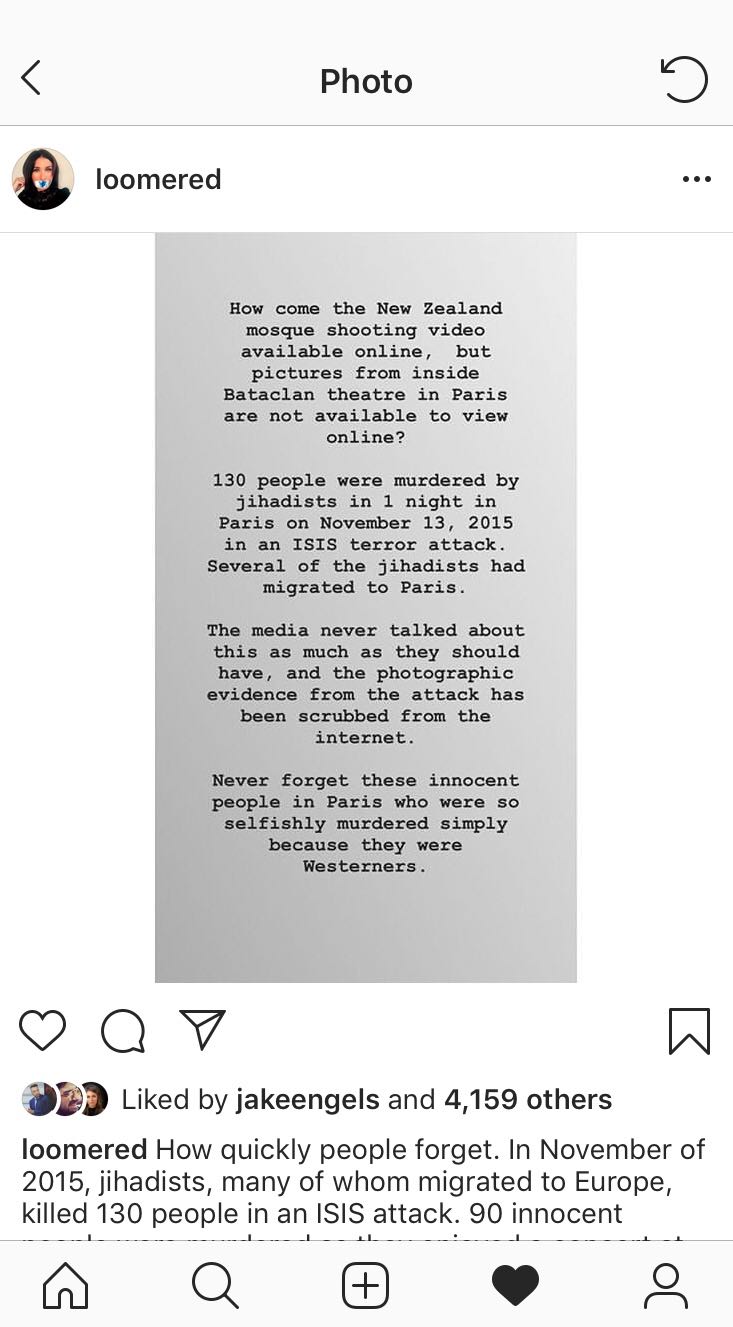 Former Breitbart editor Milo Yiannopoulos (@milo.yiannopoulos), who has connections to white supremacists, has amassed over 406,000 followers on Instagram. Yiannopoulos, who was was banned from Twitter after leading a racist harassment campaign against actress Leslie Jones, now blends personal brand and anti-Muslim content on his Instagram handle. He posted a photo of New Zealand news anchors wearing hijabs in solidarity with Muslim victims after the Christchurch terror attack with the caption “cultural suicide.” Yiannopoulos also claimed that “mainstream Islam” in the West had turned British cities into “hotbeds of radicalization and prejudice.” 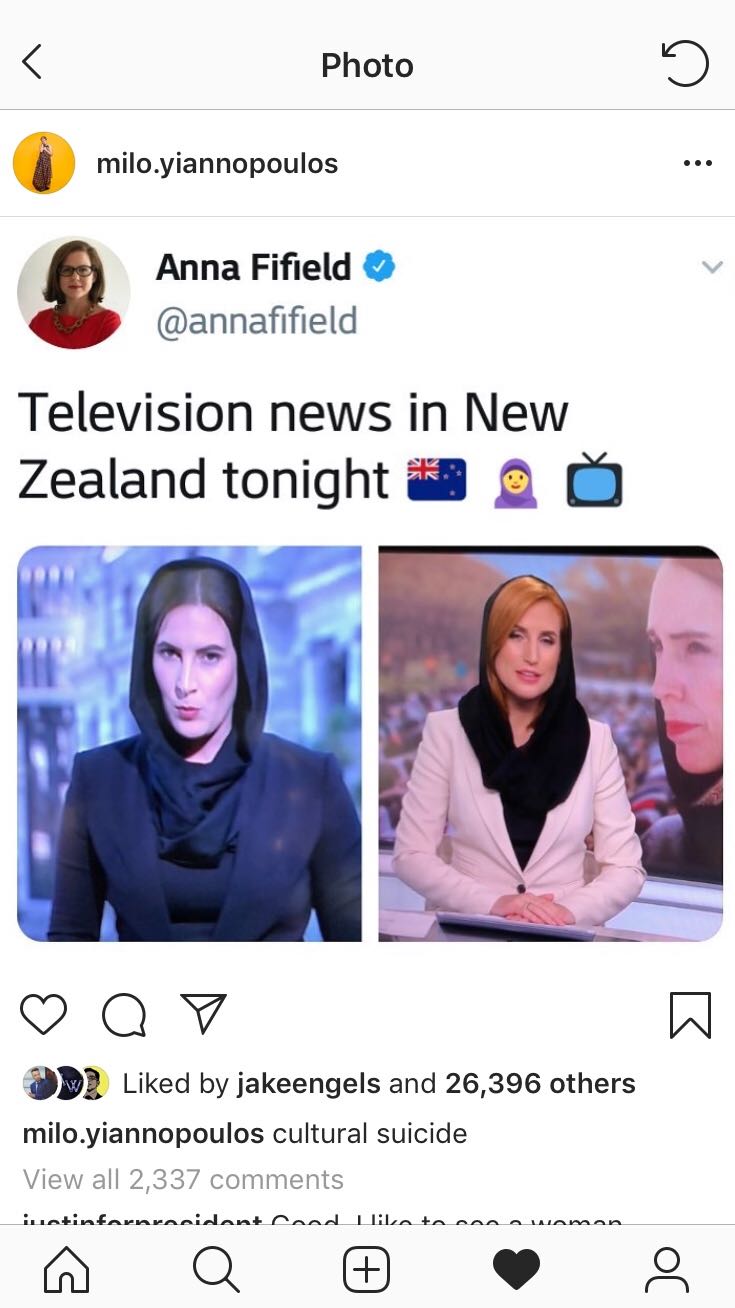 U.K. far-right bigot Katie Hopkins (@_katie_hopkins_) uses Instagram to post videos in which she smears Muslims and immigrants to her almost 29,000 followers. In reaction to the Christchurch attack, Hopkins posted a video with the text “Must we give up our culture? Do we see the same reaction when we are the victims of Islamist attacks?” In another video, Hopkins ranted that Rep. Ilhan Omar was leading the “Islamification” of the U.S. and fearmongered that immigration was leading to a religious “voting bloc” which are “facilitated by the mosque.” And in two posts, Hopkins posted videos criticizing “demographic shifts” and “multiculturalism” in two British towns with substantial Muslim populations, both terms that fit with white supremacist narratives. In one of these posts, Hopkins asked if Muslims “control” the U.K.

The far-right comedian Owen Benjamin (@owenbenjam) has posted a plethora of anti-Semitic conspiracy theories, including posts that push the white supremacist conspiracy theory that Jews “control” the government. He also regularly posts anti-LGBT hate. Benjamin has over 61,000 followers on Instagram. 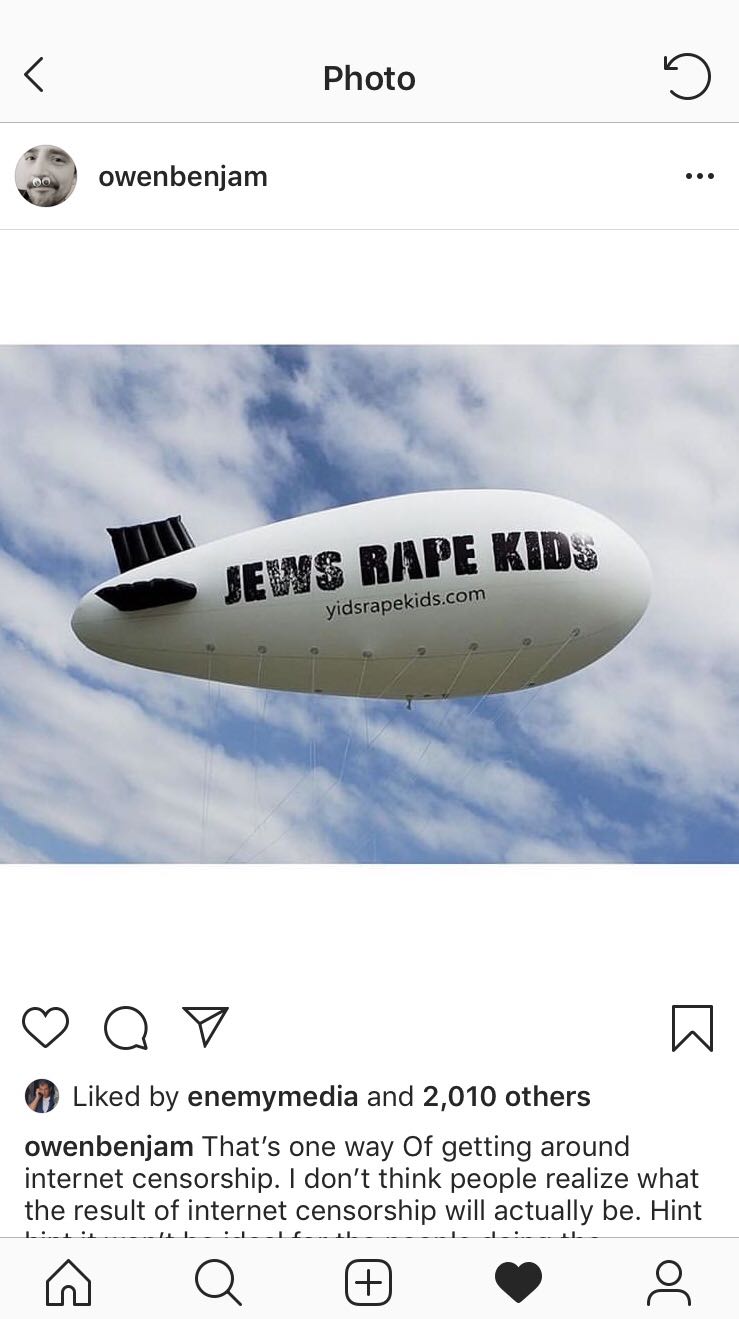 Conspiracy theorist Alex Jones (@real_alexjones), who seems to have been banned from every other major social media platform, has recently begun using Instagram to livestream his show and post clips which feature guest appearances by other extremists, as well as white nationalist talking points.

And the private handle for the social media personality and self-described Islamophobe “The Gay Who Strayed” (@thegaywhostrayed), with over 99,000 followers, regularly posts memes containing anti-Muslim messaging consistent with white nationalism. The accompanying text for one such anti-immigrant meme makes the white supremacist claim that “not all cultures are equal.” It also says: “When you import a third world country, it’s only a matter of time until you become a third world country.” Other posts push white nationalist talking points on “assimilation” and controlling the size of the Muslim population in Western countries.

Some white nationalists use Instagram as an intermediary between a sanitized media brand and extremist, hateful content.

Many of these handles seem to almost never, if ever, violate Instagram’s community standards. By avoiding posts that contain explicit hate speech, these white nationalists are able to use Instagram to reach users and direct them to content the accounts post on other platforms, compartmentalizing their extremist messaging across multiple platforms.

Although most posts pass community standards, some videos and descriptions push white nationalist ideas. In one video, Peterson declared July “white history month”; stated that Black and gay people “haven’t done a thing”; and thanked white people for “their” country because “no one else can do this.” One Red Ice image post previewed an episode on the white supremacist “population replacement” conspiracy theory, which stipulates that minorities and immigrants are replacing the white population of Western countries (and which was echoed by the Christchurch shooter in a manifesto titled “The Great Replacement,” which he posted online before allegedly committing the massacre). 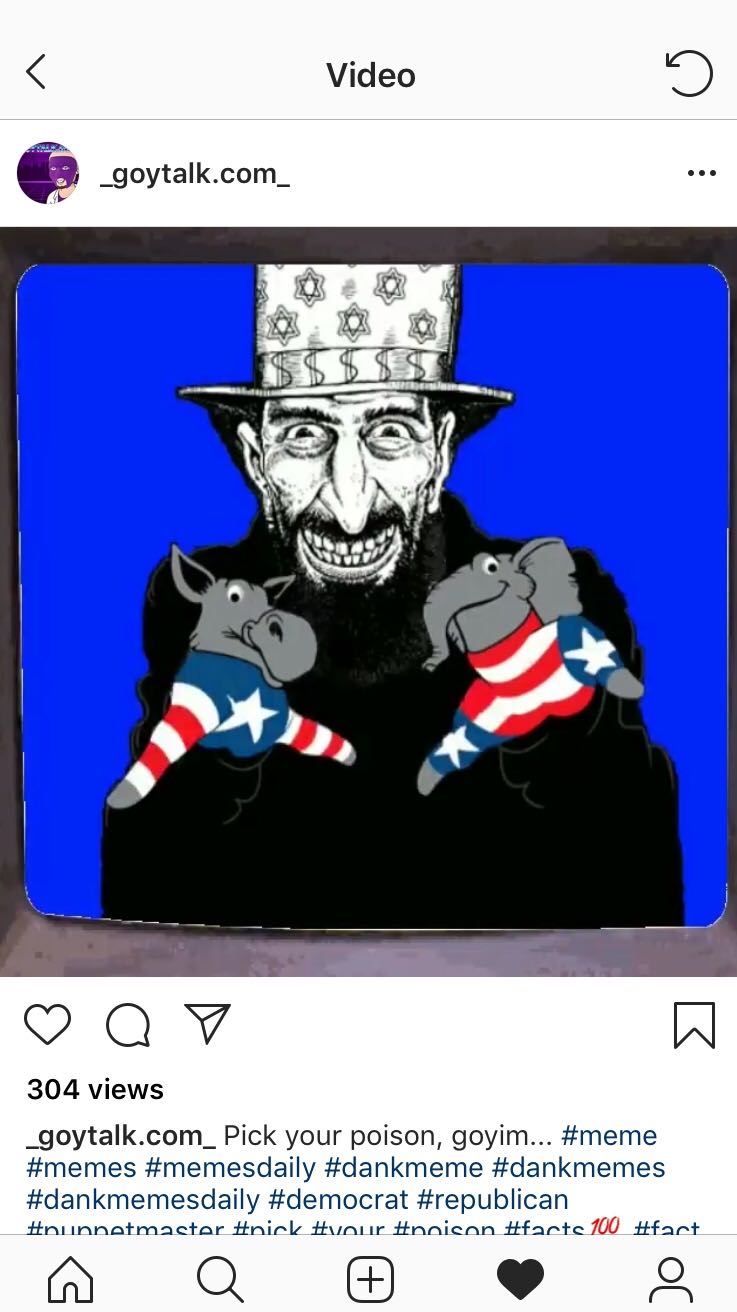 Tucker Carlson’s show on Fox News (@tuckercarlsontonight) has an active Instagram handle, posting clips and previews for the show usually a couple of times a week. However, most show clips posted on Instagram aren’t necessarily representative of Carlson’s white nationalist programming.

Others are using the platform to blend typical Instagram lifestyle posts with extremist memes and messaging. 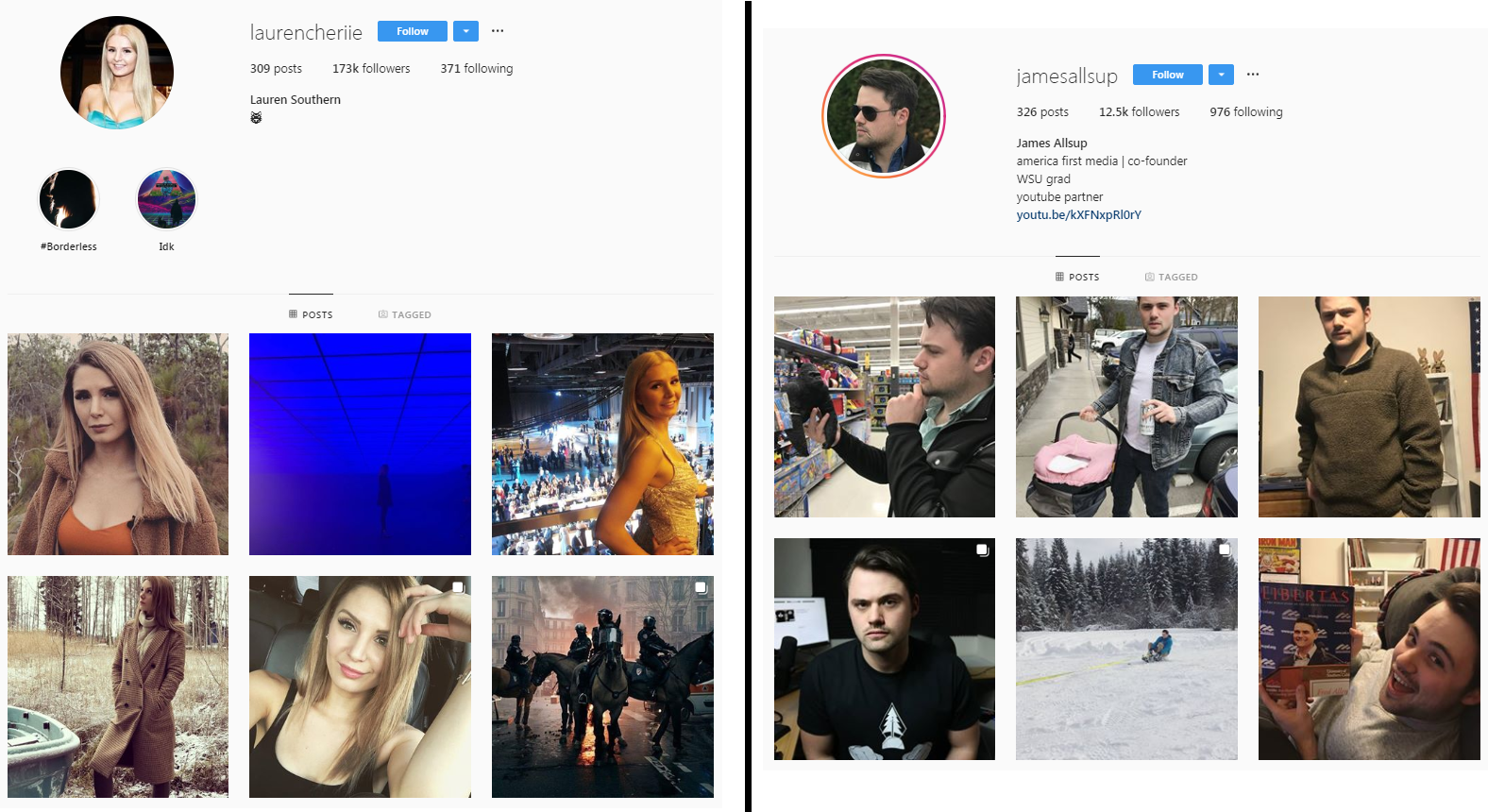 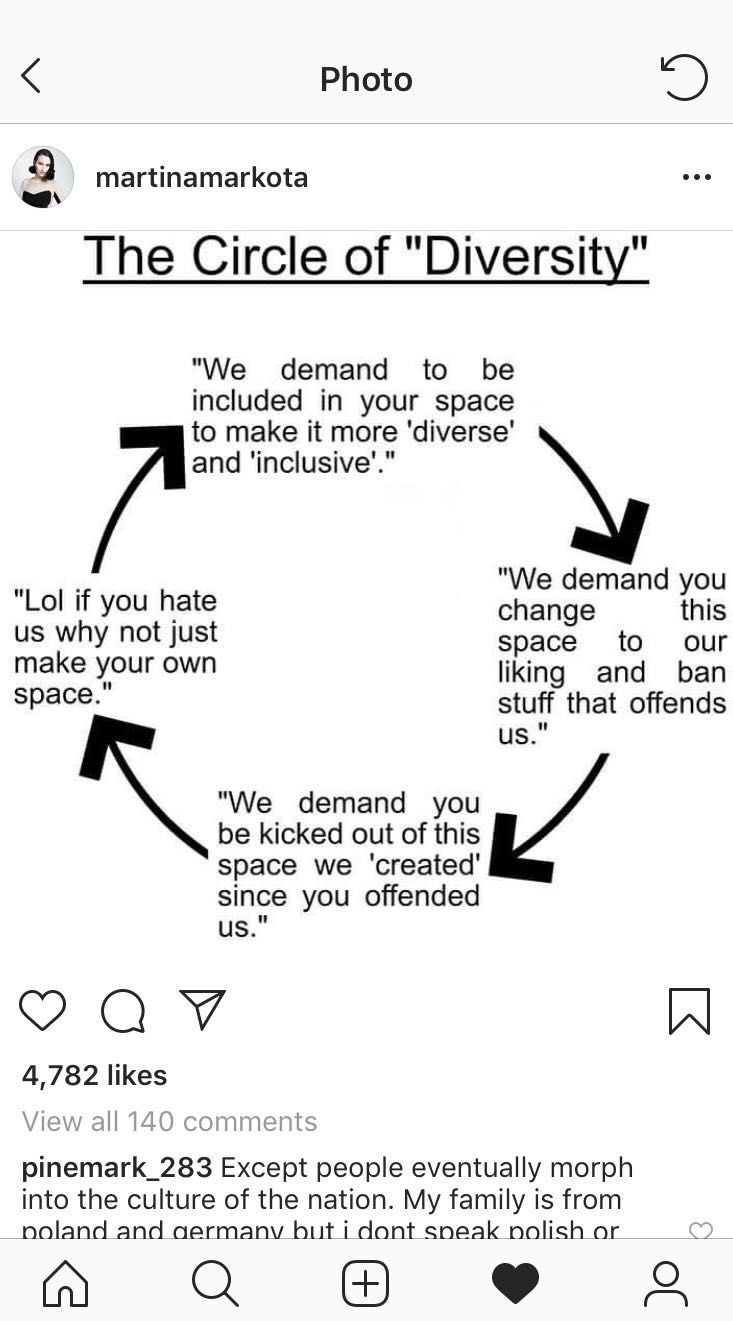 Figures whose extremism gets them banned from other platforms find in Instagram a helpful tool to continue engaging their audiences, as evidenced by follower counts after bans from other networks. Just before she was banned from Twitter in late November, Laura Loomer had about 38,000 followers on Instagram. As of April, she has over 111,000 -- a 191% increase in followership over just four and a half months. Alex Jones also saw an increase in Instagram followers after his Twitter and Facebook ban, with his numbers jumping by 49%. And since Tucker Carlson began fanning the flames of debunked claims of big tech censoring conservatives one year ago, his show’s Instagram account has seen a 350% increase in followership, from 70,000 followers in March 2018 to over 315,000 followers in April 2019.