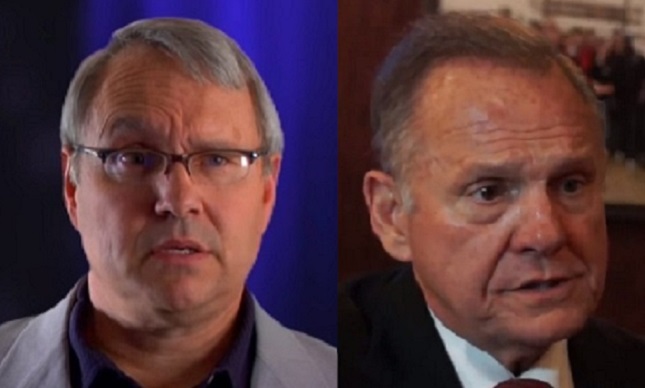 UPDATE: According to the Moore campaign’s pre-special election report -- which was filed after this post and received by the secretary of the Senate on December 1 -- Moore’s campaign returned Johnson’s contribution in October.

William Johnson, a white supremacist leader who has called for the deportation of nonwhites, recently donated to the U.S. Senate campaign of Alabama Republican Roy Moore. Throughout his career, Moore has repeatedly associated with white nationalists.

Moore is a right-wing pundit and twice-removed Alabama Supreme Court judge who holds extreme and toxic views on LGBTQ rights, religion, and environmentalism, among other issues. The Washington Post recently reported that Leigh Corfman said Moore molested her when she was 14 and he was 32. Three other women told the Post that “Moore pursued them when they were between the ages of 16 and 18 and he was in his early 30s.”

Johnson, who openly refers to himself as a “white nationalist,” heads the American Freedom Party, which claims to represent “the interests and issues of White Americans and all Americans who support our mission.” He donated $250 to Moore’s campaign on September 20, according to the campaign’s October quarterly report.

The Southern Poverty Law Center wrote that Johnson authored a book under a pseudonym in which he advocated “the repeal of the 14th and 15th amendments and the deportation of almost all nonwhite citizens to other countries. Johnson further claimed that racial mixing and diversity caused social and cultural degeneration in the United States.” Johnson also regularly appears in white national media.

Johnson drew notice during the 2016 presidential campaign when the Trump campaign selected him as a convention delegate from California. He later resigned from that position and the Trump campaign blamed a “database error” for the selection. The campaign also accepted a $250 donation from Johnson, which it later returned after criticism. Johnson separately issued robocalls asking voters to support Trump because there is purportedly a “gradual genocide against” white people.

Moore has a long history of associating with white nationalists. For example: