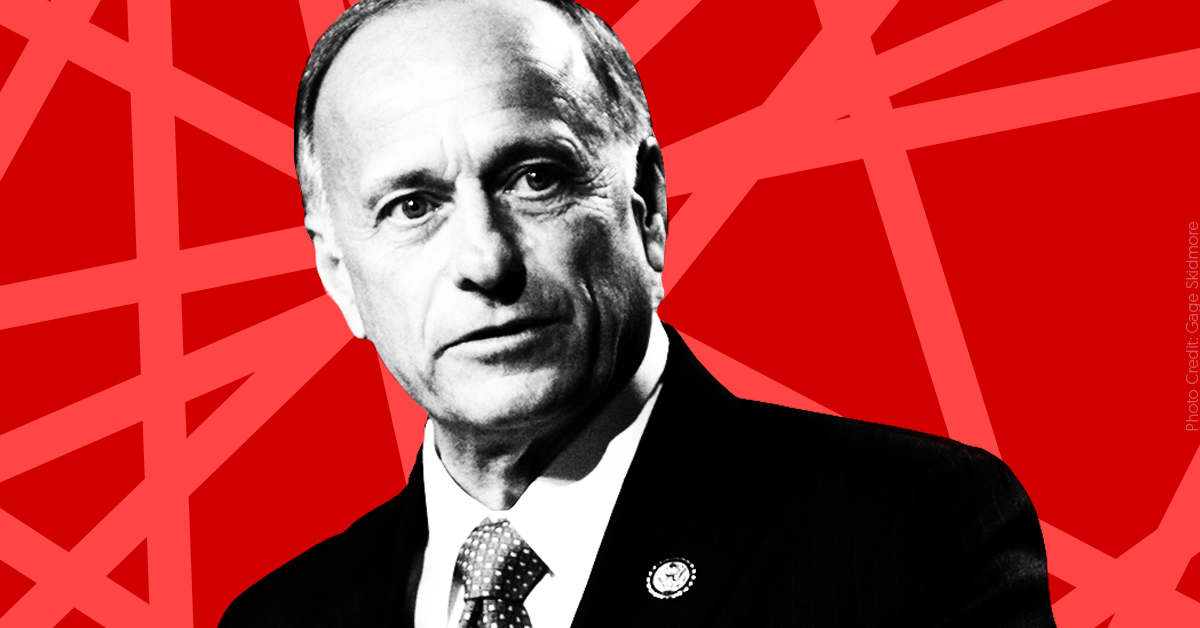 The most prominent broadcast news programs have mentioned openly white nationalist Rep. Steve King’s (R-IA) racism only a handful of times over the past two years.

King’s ugly white nationalism reared its head again in a January 10 New York Times interview in which he said, “White nationalist, white supremacist, Western civilization — how did that language become offensive? Why did I sit in classes teaching me about the merits of our history and our civilization?” (In a statement, King later denied being a proponent of white supremacy, despite his comments to the paper.)

According to a Nexis search of NBC’s Nightly News, Meet the Press, and Today, CBS’s CBS Evening News, Face The Nation, and CBS This Morning, and ABC’s World News Tonight, This Week, and Good Morning America, there have been just six references to King and race dating back to January 1, 2017, in some cases in segments that fell short by obfuscating or devoting scant time to the clear and open nature of the Iowa congressman’s bigotry.

In two segments, ABC mentioned a March 2017 tweet in which King showed his support for white nationalist Dutch politician Geert Wilders, writing, “Wilders understands that culture and demographics are our destiny. We can't restore our civilization with somebody else's babies.” The March 14 broadcast of ABC’s World News Tonight covered the tweet but fell short, summing up the incident as “racially charged” while noting that King’s comments were “labeled racist and bigoted.” Coverage was better the following day on Good Morning America, with co-host George Stephanopoulos plainly stating that King was “under some fire now for that tweet he had the other day where he was really appealing to white nationalists.”

During the December 10, 2017, broadcast of NBC’s Meet the Press, host Chuck Todd asked Sen. Tim Scott (R-SC) whether King’s position that “diversity is not our strength” could be a problem for the Republican Party. King was mentioned in passing on the July 1, 2018, broadcast of CBS’s Face the Nation, when guest and former John McCain speechwriter Mark Salter said, “Steve King, for instance, who keeps writing, you know, about -- as if it's, you know, American citizenship is some kind of racial purity test.” On October 30, 2018, NBC’s Lester Holt described King as “controversial” on NBC Nightly News, noting that “the head of the National Republican Congressional Committee [is] condemning Steve King for comments about race and associations with white nationalism.” And on the November 11, 2018, edition of Face The Nation, Politico’s Rachael Bade noted that King’s “rhetoric” had “sort of divided the Republican leadership about whether or not to back him or just not say anything.”

None of these mentions seriously reckoned with King’s apparently consequence-free promotion of white nationalism, although Stephanopoulos’ brief mention of King did succinctly summarize the issue.

amazing to me that we had a week long controversy over a congresswoman saying “motherf***er” when steve king is just hanging out in congress as an open white supremacist https://t.co/P3lyMivVQO

Indeed, Rep. Rashida Tlaib’s (D-MI) comments calling Trump a “motherfucker” on January 3 produced half as many mentions on broadcast news programs over several days as King’s white nationalism has over the last two years. During the January 6 broadcast of NBC’s Meet the Press, Tlaib’s comment was included in the show’s introduction and host Chuck Todd later referenced her comment again, saying, “Democrats have to worry about their own grassroots. This week, freshman Congresswoman Rashida Tlaib of Michigan revived the debate over impeachment after these comments were caught on tape.” Tlaib’s use of profanity was also covered on the January 4 editions of CBS Evening News and NBC Nightly News, with NBC correspondent Kristen Welker saying Tlaib “is sparking a firestorm, caught on camera telling a crowd last night what she told her son about the president” and “prompting a barrage of Republican backlash.”

Methodology: Media Matters used Nexis to search for “Steve King” on NBC’s Nightly News, Meet the Press, and Today, CBS’s CBS Evening News, Face The Nation, and CBS This Morning, and ABC’s World News Tonight, This Week, and Good Morning America from January 1, 2017, through January 10, 2019. We also searched for “Rashida Tlaib” on those same programs between January 1, 2019, and January 10, 2019.